The call by Mr. Gotabhaya to annul the 13th A , echoed by his blood hounds, is not a slip of the tongue, some idle, conjectural suggestion 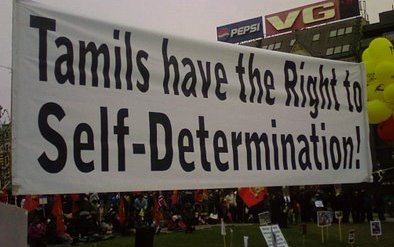 On the Politics  of the 13th Amendment. By: Surendra Ajit Rupasinghe
The Secretary to the Ministry of Defense, a non-elected bureaucrat appointed by his  brother, has declared that the 13th Amendment should be annulled since it constitutes a breeding ground for separatism. The not so-Hon. Wimal Weerawansa of the ex-JVP neo-fascist brigade declares his vow to join forces to abolish it. The JHU champions this cause publicly. Mahinda remains silent, and so does mummified Vasu. So, battle lines are being drawn on the 13th Amendment, as opposed to, say, the issue of war crimes, impunity  and human rights violations and the cost of living. Clever.
When the screws are tightened in Geneva and the Regime cannot account for its pledges and promises, the next best thing to do is to threaten to change the whole framework of global strategic contention- change the rules of the game. The call by Gotabhaya  to annul the 13th Amendment, followed to the tune by Wimal and Champika,  is a signal to the international powers that be, that if the screws are tightened any further in Geneva, the pack of cards may collapse, and a whole new geo-political strategic matrix will be set up in Asia to command the vital sea-lanes of the Indian Ocean.

President Rajapakse may very well say, “ If you continue to tighten the rope on accountability , we will say to hell with you- you pack of hounding hypocrites. We are not about to commit political suicide- both  me personally and politically, but for my family, for my dynasty, just to satisfy  you. The only option left for us is to rely on tried and tested rules and principles of democratic governance, as we in Lanka know it, – re-conjure up a blood curdling demon about to devour the people in the form of a resurgent LTTE, create a situation of crisis and anarchy, create a sense of generalized instability and insecurity among the masses, apply selective methods of mass terror and assassination, liquidate all potential threats and centralize absolute power in the hands of the Executive Presidency. For this, we have to traverse the beaten path of inflaming communal violence and provoke the masses to feast on each other’s blood, while we feed on the roast. Come on, we all know how communal pogroms and genocide play their role in desperate times. We have to pump the ideology and politics of Sinhala Buddhist supremacy and hegemony into the  blood lines of the Sinhala masses even more ferociously, so we can better manipulate and exploit them to face the dire hardships and sacrifices they would have to make on my behalf, and still support me. So, this is our master strategy to confront the threat posed by Western Imperialist powers. We can be rest assured that neither China, Russia, Iran nor Pakistan would be concerned about any human rights violations – genocidal or just simple, run-of-the-mill, routine atrocities. We share a consensus on these principles of democratic governance. Even the US, Japan, European and other imperialist powers who dare to challenge my claim to perpetual, dynastic kingship, share these values of genocidal governance. They are the true masters of the game. So, let us give them a good lesson and play their game on our own terms’.

The call by Mr. Gotabhaya to annul the 13th Amendment , echoed  by his blood hounds, is not a slip of the tongue, some idle,  conjectural suggestion. Gotabhaya does not make such statements on national policy, without official sanction. He knows that seeking a political solution on the basis of the 13th Amendment would spell the death-knell of the supremacist project to extend and expand the hegemony of the Sinhala-Buddhist State throughout the length and breadth of Lanka.  Mahinda knows that any concession to Tamil self-determination, any form of regional or provincial autonomy-however truncated, any form of devolution of political power to the Tamil nation-even cosmetic-  would bring on a tidal wave of opposition from within its own chauvinist ranks, including from sections of the  armed forces, and from outside the UPFA. Don’t be misled. Sarath Fonseka can play the role of the ‘defender of the Motherland’ in genocidal fashion, equal to, and perhaps even better that the Rajapakse triumvirate. The provocations around the 13th Amendment are a vital part of the survival strategy of the Regime, in the concrete context of the emerging geo-political strategic game plan of the various imperialist and regional hegemonic powers over securing undisputed domination and control over the vital sea-lanes of the Indian Ocean, and thereby secure strategic superiority in a global contention for supremacy and dominance.

The 13th Amendment remains a cosmetic and truncated device designed by Rajiv Gandhi and J.R. Jayawardene, packaged as the Indo-Lanka Accord. Its purpose was to disarm and co-opt the LTTE and maintain the stability of the  neo-colonial set up and status quo in the region. Yet, it remains a landmark political victory for the Tamil National Movement in that it constitutionally recognized 1. the political status of the Tamil nation, 2. the parity of status of Sinhala and Tamil as official languages and 3. The North-East region as the traditional homeland of the Tamil nation. While these provisions and principles continue to be defiled and undermined  in practice, the Mahinda Rajapakse Regime now finds that any renewed recognition and application of these provisions and principles would fatally undermine its chauvinist-militarist political and ideological hegemony upon which its survival and regeneration solely lies. It has few options open, and the call to annul the 13th Amendment is to announce that the future of the Tamil nation will, once again, be held up to be sacrificed at the alter of the blood-drenched Comprador Capitalist State. Of course, any move to abolish the 13th Amendment will stoke the flames of separatism as nothing else. Perhaps it is that the Regime requires a permanent state of undeclared war to maintain its power.

It is duty of all democratic and progressive forces to rise to the defense of the right of self-determination of the oppressed Tamil nation, where the fight to defend the political status and fundamental democratic rights of the Tamil nation embodied in the 13th Amendment has evolved to be a most decisive contention.
The writer is Secretary: Ceylon Communist Party (Maoist)