Text of the No Confidence Motion against President Gotabaya Rajapaksa 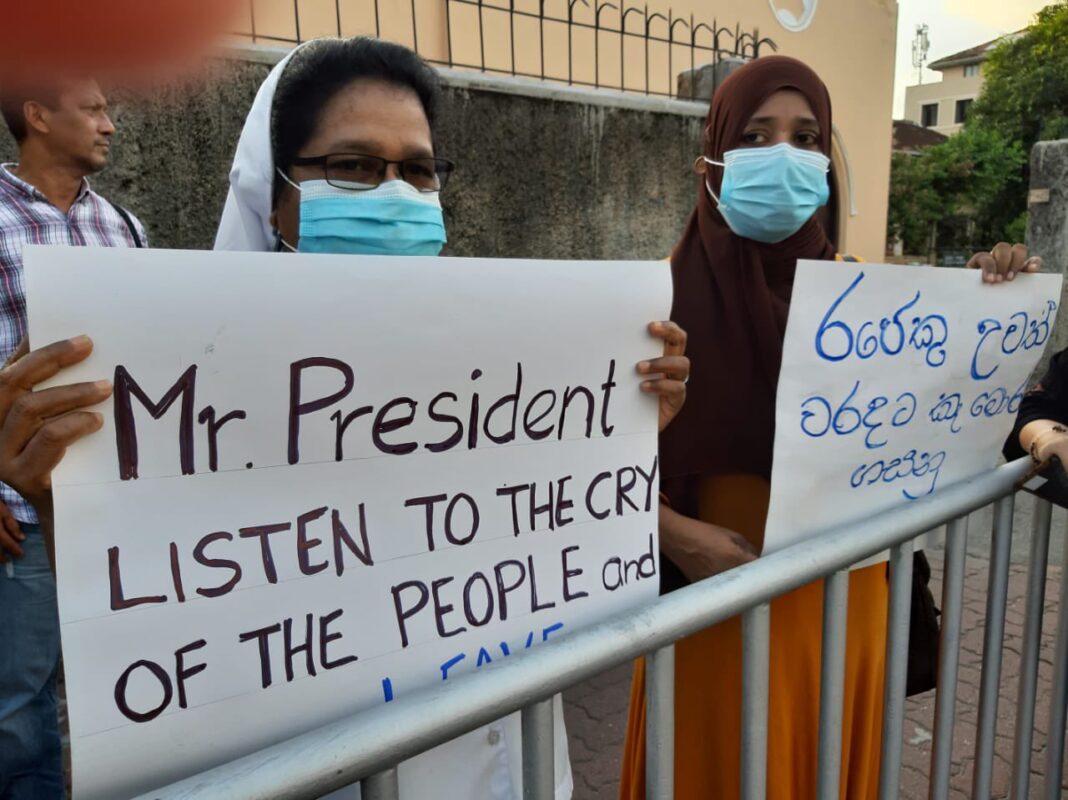 The main Opposition Samagi Jana Balawegaya (SJB) yesterday handed over two No-Confidence Motions, one against President Gotabaya Rajapaksa and another against the Government, to Speaker Mahinda Yapa Abeywardena.

The text of the  No Confidence Motion  against the President Rajapaksa  follows:

No Confidence Motion against His Excellency Gotabaya Rajapaksa,President of the Democratic Socialist Republic of Sri Lanka

Whereas in terms of Article 42 of the Constitution the President is responsible to Parliament for the due exercise, performance and discharge of his powers, duties and functions under the Constitution and any written law including the law for the time being relating to public security;

And Whereas His Excellency Gotabaya Rajapaksa was elected as the President on 17th November 2019 and continues to hold that office to date;

And Whereas soon after his election, the President appointed his brother Hon. Mahinda Rajapaksa MP as the Prime Minister and invited him to form the government, which he did;

And Whereas the government headed by the President announced a series of tax reliefs in December 2019 with a view to win the General Election, which the President was entitled to call for at the end of February 2020;

And Whereas the said tax reliefs resulted in the State losing as much as 25% of the expected revenue, which in turn contributed largely to the ratings falling from B to B- by April 2020, and to CCC by November 2020, shutting the country out of being able to borrow any further from the international financial markets;

And Whereas in or about April 2021 the President ordered the prohibition of the use of chemical fertilizer and implemented the order with immediate effect causing untold hardship and colossal loss of yield of various produces;

And Whereas there was a lack of due process in handling the COVID 19 pandemic, while also ignoring expert scientific advice, the President misused the COVID-19 pandemic to expand and increase militarization around the island;

And Whereas scientific and medical advice was not heeded, which resulted in targeting minority communities through forced cremations including that of a 20 day old baby as well as the encouragement of quack remedies. The fund balance in the ‘ITUKAMA’ COVID-19 Healthcare and Social Security Fund had surpassed a sum of Rs. 1.659 billion by October 2020, yet there was a massive shortage in hospital and medical facilities available to patients;

And Whereas the President failed to follow procedures set in law and brought into force
illegal declarations of ‘curfew’ and ‘quarantine curfew’ during the peak of the COVID-19
pandemic without the necessary Gazette publications;

And Whereas purchasing the Sinopham vaccine for 15 USD per dose instead of the 2.85
USD rate, and thereby worsening the dent in the economy while failing to take urgent and
timely steps to secure the required vaccines and commence the vaccination drive to curb the rapid spread of the deadly virus;

And Whereas the President appointed his brother Hon. Basil Rajapaksa, against whom court cases for fraud were pending, as the Minister of Finance in July 2021;

And Whereas the President appointed of Ajith Nivard Cabraal as the Governor of the Central Bank in or about September 2021 by ignoring his previous murky track record in economic decision making;

And Whereas nearly 730 incidents of gas cylinder explosions were reported due to a change in composition of the LP gas cylinder causing multiple deaths and injuries;

And Whereas the President has continuously failed to make decisions based on rational, scientific and expert advice and resorted to the counsel of a soothsayer W M Gnanawathi, alias‘Gnanakka’ while also using public funds to construct her temple and provide her with military protection;

And Whereas on or about the 1st of April 2022 the President abused powers under the Public Security Ordinance by invoking the said powers and illegally declaring a State of Emergency for his personal security and thereby infringing on the citizens fundamental rights to peaceful protest, movement, freedom to practice a religious of their choice, freedom from arbitrary arrest and detention, freedom of association and to engage in lawful businesses;

And Whereas on or about 3 rd of April 2022 a Social media ban imposed on the citizens further deprived their fundamental rights including the right to access to information including crucial and essential information such news updates and easy access to the daily power cut schedule;

And Whereas when the President was challenged of his illegal decision by asking that a vote be taken in Parliament, he immediately revoked the proclamation of emergency on 4th May 2022;

And Whereas on or about the 19th of April 2022, citizens in Rambukkana who were exercising their right to protest by agitating about the sudden increase in fuel prices were shot at by law enforcement officers, killing one, critically injuring 3 and injuring many other unarmed civilians;

And Whereas many citizens came by their deaths while standing in queues for essential items due to severe shortages as a result of the exacerbation of the economic status of the Country;

And Whereas the President admitted that he had made mistakes in imposing an immediate ban on chemical fertilizers and in delaying to seek the help of the International Monetary Fund. Both ‘mistakes’ had very serious adverse impact on the economy;

This Parliament resolves that it has no confidence in the President, His Excellency Gotabaya
Rajapaksa.

The motion also comes as over 50 SLPP MPs who have chosen to sit in Opposition are in talks with the President to set up an all-party interim Government as a short-term measure to overcome the economic problems facing the country.

Sources at the Prime Minister’s Office yesterday dismissed reports that he will make a special statement in Parliament and step down today even though there is growing opposition from within the SLPP to him remaining in the post.

SJB sources said they will insist on an early date for the debate. A Parliament Business Committee meeting is scheduled for today where a date to hold the debate is likely to be decided upon.

“We want to have the debate next week but it’s unlikely the Government will agree to it. Then it will be taken up in the third week of May,” a senior SJB MP said.

If the motion is passed by the House with a  simple majority (majority of members present at the time of voting), the Cabinet will stand dissolved.

The No-Confidence Motion against the President drafted in terms of Article 42, which, even if passed by the House, will not be binding on him to resign from office, levels a number of charges accusing him of causing the ongoing economic crises.

These include the tax cuts that he granted soon after taking office in 2019 which has led to a drop in State revenue by about 25% as well as the ban on the use of chemical fertiliser which has had an adverse impact on the agriculture sector.

The NCM also accused the President of bypassing the due process in handling the COVID-19 pandemic and increasing militarisation, forced cremation of COVID-19 victims, not using the funds from the ‘ITUKAMA’ COVID-19 Healthcare and Social Security Fund for the health sector, illegal declarations of ‘curfew’ and ‘quarantine curfew’ during the peak of the COVID-19 pandemic without the necessary Gazette publications as well as purchasing vaccines at a higher price than the stipulated world market price.

The other allegations against the President are that he appointed his brother Basil Rajapaksa as Finance Minister when there were court cases for fraud pending against him, and appointed Ajith Nivard Cabraal as the Governor of the Central Bank by ignoring his previous murky track record in economic decision making.

The Motion said the President has continuously failed to make decisions based on rational, scientific and expert advice and resorted to the counsel of a soothsayer W.M. Gnanawathi alias ‘Gnanakka’, while also using public funds to construct her temple and provide her with military protection.

It also says he abused powers under the Public Security Ordinance by declaring a State of Emergency and a ban on social media for his personal security and thereby infringing on the fundamental rights of the people.