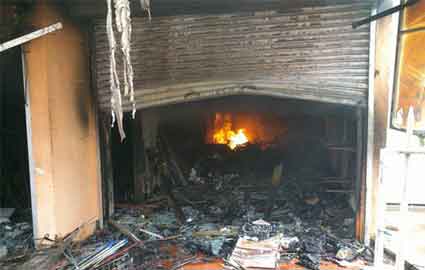 Tamil organisations across the world condemned the attacks against Muslims over recent days by Sinhala Buddhist mobs in Aluthgama.
Drawing on Tamil experiences of pogroms at the hands of the Sinhala Buddhist state, organisations including TNA, TNPF, GTF, BTF, USTPAC and TIC expressed solidarity with Muslims and called on the international community to ensure accountability and justice.
Recalling the Sri Lankan state’s violence against Tamils over decades, the leader of the Tamil National Alliance (TNA), R Sampanthan, in an address to parliament on Tuesday, warned “now racist forces are only beginning a pogrom of violence against the Muslim community”.
“The black past of thousands of disappearances, killings, rapes, burnings and state brutality are not just a distant memory,” he added.
The leader of the Tamil National People’s Front (TNPF), Gajendrakumar Ponnambalam, condemning the violence as a further manifestation of the state’s project of creating a Sinhala Buddhist ethnocracy, pledged to “stand as one with the Muslims to resist this project to the hilt”.
Speaking to Tamil Guardian ahead of the party’s press conference on the anti-Muslim riots, scheduled for later this afternoon, Mr Ponnambalam said,
“The anti Muslim riots are symptomatic of the Sinhala Buddhist nationalist agenda of creating an ethnocracy.”
“This project, which started just prior to the departure of the British, has so far been concentrating on destroying its biggest challenge – the existence of Tamils as a nation on the island. With the ‘success’ of the genocide culminating in Mullivaikkal, they are confident that they have struck a fatal blow against the Tamils, who they believe are not a major obstacle anymore.”
“Now this project has turned its focus on the second hurdle to achieving the goal of a Sinhala Buddhist ethnocracy, which is the Muslims.”
Given this reality it is every Tamils duty to look upon the events targeting the Muslims as affecting our own kind. We will stand as one with the Muslims to resist this project to the hilt.”
The Global Tamil Forum (GTF), expressing condemnation against the violence in a statement released on Tuesday, endorsed a statement made by the UN High Commissioner for Human Rights, Navi Pillay, the day before.
“President Rajapaksa’s assurances that there will be a formal inquiry into what has happened will be of little comfort to those affected, given the culture of impunity that exists in Sri Lanka and the failure of his government to investigate credibly other cases of serious human rights abuses including the allegations of war crimes and crimes against humanity committed during the end of the country’s armed conflict in 2009.
In addition, GTF has consistently expressed concerns at the on-going attacks upon non-Buddhist religious communities in Sri Lanka and this latest tragic outbreak of violence highlights the fact that the country is a long way from a sustainable and just peace.”
See full statement here.
Joining the international community’s condemnation of the violence, the British Tamils Forum (BTF) called for “effective accountability and punishment for the perpetrators and instigators of the this violence”.
“The root cause of this violence is the ‘Sinhala only’ mind-set of the Sri Lankan state, which sees every other nationality and religious group as outsiders that must be eliminated or chased away from the island.”
“British Tamils Forum shares the pain of the affected families and stands in solidarity with the Muslim community.”
“We call on those Islamic countries that support the Buddhist-extremist state of Sri Lanka to reconsider their support. The world must unite to condemn and exert targeted, effective pressure on this state to cease its violence.”
See full statement here.
The US Tamil Political Action Council (USTPAC) said it “strongly condemns” the attacks against Muslims, calling on the international community “to address the rampant impunity on the island” and “to take meaningful action to ensure the safety of the Muslims and other ethnic and religious groups in Sri Lanka”.
“These attacks are often done with the complicity of the Sri Lankan government. The perpetrators are never prosecuted,” USTPAC President Dr. Karunyan Arulanantham said.
“Tamils have long been the victims of this state violence and the pervading impunity, and we join hands with our Muslim brethren to end the destructive prejudice that prevents all ethnicities and religions from living peacefully and with mutual respect on the island,” he added.
Pointing to the pride of place given to the protection of Buddhism in the Sri Lankan constitution and the state patronage that turns a blind eye to actions of Buddhist extremists, he went on to say:
“Until this structural strangulation that fosters religious superiority and ethnic majoritarianism is done away with and meaningful devolution and power-sharing is instituted, it is hard to break the cycle of violence and convince Tamils and Muslims that they are safe.”
See full statement here.
The Tamil Information Centre (TIC) said it was “deeply disturbed by attacks against the Muslims in Sri Lanka” in a statement made on Monday, and called on other groups to “stand in solidarity with the victims and survivors of the villages of Aluthgama, Beruwala, Dharga Town, Walpitiya and Velipenna” and add their names to a petition urging the government of Sri Lanka to stop the violence.
“These attacks have caused immense human suffering. We share the pain of those families who have become victims of atrocious acts, and we deplore such actions.
We view the targeting of Muslims within the context of growing intolerance against the religious minorities in Sri Lanka and the inaction of the government. The TIC urges the Sri Lankan government to unreservedly condemn the targeting of religious communities and take immediate and concrete steps to bring the perpetrators to justice and protect the Muslim community and other religious minorities in the country.”
Share
Facebook
Twitter
WhatsApp
Pinterest
Email