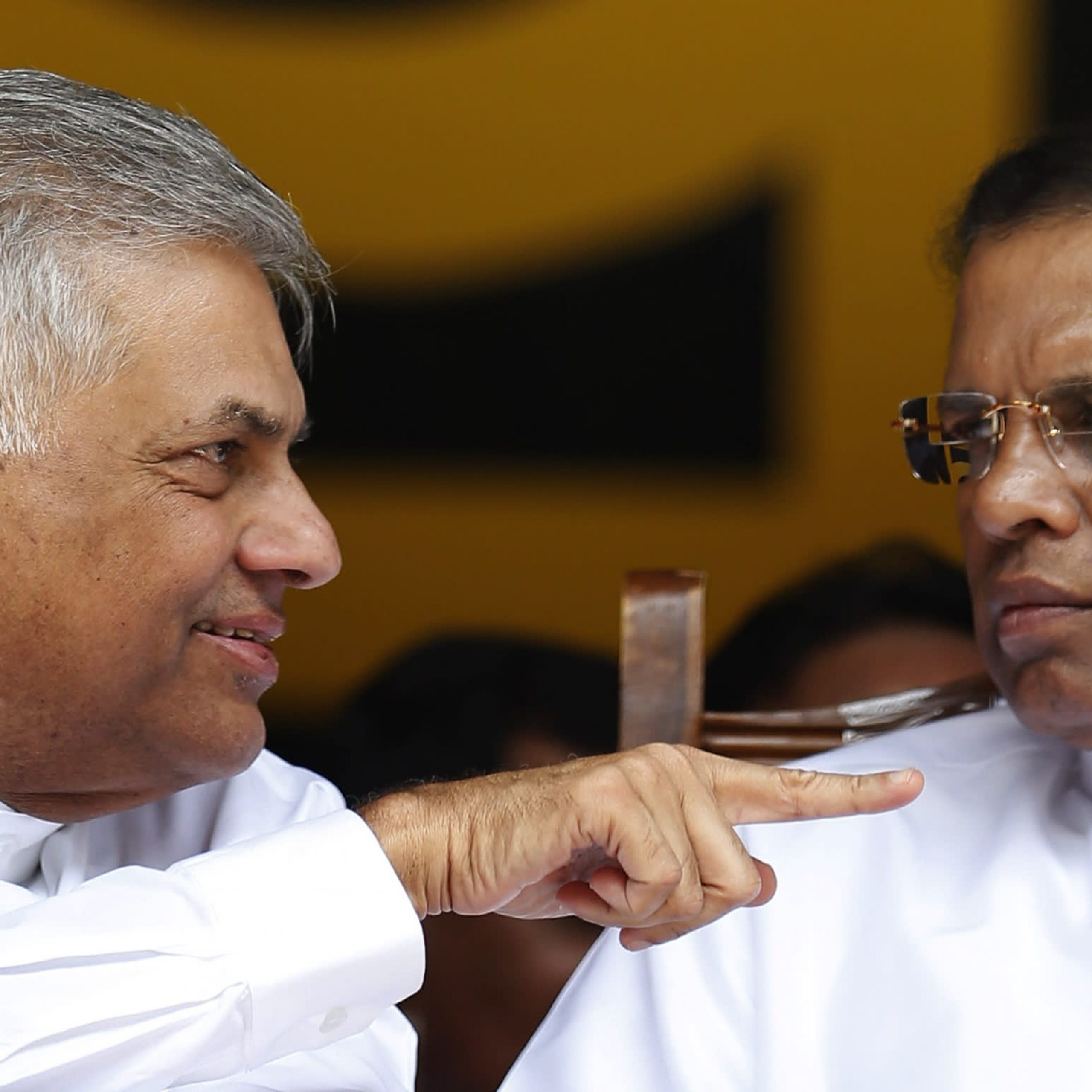 Image: Once allies became enimies — President Maithripala Sirisena, right, with Ranil Wickremesinghe, whom he has sought to oust as prime minister   © Reuters.

Preaching to others while lifting a supercilious finger at inequities patently becoming apparent in the return of the Rajapaksas to seats of power in Sri Lanka, the most recent of which is the government direction that the National Anthem will be sung only in Sinhala at the Independence Day celebrations next year, may serve as a soothing salve of sorts to many in chastened ‘yahapalanaya’ ranks.

Calls of ‘victimisation’ are of little use

That is understandable perhaps as bitter disappointment following the United National Party led coalition’s defeat at last month’s Presidential polls still rankles. The coalition’s contender Sajith Premadasa braved the odds against party seniors who undermined him at every turn even as he failed to properly distance himself from discredited faces on the political stage. That the undermining of the UNP from within will continue in 2020 leaving it crippled to face the forthcoming General Elections is as ‘plain as a pikestaff’, as the popular saying goes.

Absent a surge of ‘peoples power’ to cleanse the party of ‘undesirables,’ including those who protected the Rajapaksas and others indelibly tainted by their association with ‘Bond Scam’ Aloysious, there will be no respite from the party’s woes. But incredibly, the UNP has still not learnt its lessons. Insulting the peoples’ intelligence, some of these very same faces paraded in public this week to complain about the arrest of former Minister Rajitha Senaratne. This second arrest followed like lightning speed after an earlier police arrest of former Minister Champika Ranawaka in relation to a traffic accident four years ago on a ‘direction of the Attorney General.’ The framing of this direction as being ‘superior’ to the writ of a Magistrate was adversely commented on in these column spaces last week.

This time around, the cautious manner in which this arrest was effected was clearly in contrast to the previous arrest. It followed a warrant issued by court over allegations that Senaratne had held a pre-election media briefing on November 10, along with two persons claiming to be involved in ‘White Van’ abductions implicating the previous Rajapaksa regime. The UNP’s complaint was that the former Minister had, if at all, held the briefing in ‘good faith’ As argued, this comprised the dissemination of news on a political platform. If this is to be criminalised, then virtually thousands of other offences would be committed routinely. The matter is now before court and best left there to be decided in due course. However, the point is that, these calls to high heaven of ‘victimisation’ are of little use if the UNP-led alliance does not pull itself together to offer a credible political alternative to the rejuvenated Rajapaksa juggernaut.

Misconceptions regarding the November polls

Absent that critical change, there are few sympathetic ears on offer. Even those who may cursorily listen, will shrug and move on with a passing cynical comment that what we see now are the fruits of legion stupidities committed by the Sirisena-Wickremesinghe alliance right from 2015. The whines of party members that the UNP’s ‘leadership crisis’ will be ‘solved next week, next month, next year…’, meanwhile have become unutterably boring. To put it simply, except for the party faithful, people have just lost interest in the main Opposition party. This does not augur well even if Sri Lanka was poised to have its most democratic Government potentially in power, which is certainly not the case.

Even so, let us leave these jaundiced struggles of an old political ram obstinately clinging on to party positions and power to the great detriment of the party aside. There is a wider question in issue to be addressed, namely misconceptions regarding the country’s November Presidential poll result. Increasingly, domestic and global readings of the election result portray this as an ‘inevitable’ result of the sweep of nationalism in South Asia and beyond. Yet this rendering of that electoral loss is not quite accurate. In 2015, that tide of nationalism was already a global and regional force but Sri Lanka withstood that challenge and voted to eject the Rajapaksas. In 2019, they voted them back into power. To what exent, was this to do with nationalism and the ‘Sinhala-Buddhist wave’? Some myths need to be exploded.

Let us put the march of nationalist ethno-religious supremacy in Sri Lanka in context. This has provided a fertile feeding frenzy for a plethora of research papers and potentially pedestrian doctorates. Undeniably, it is a potent force in its own right as exemplified by the crudities of right wing Buddhist extremists who, despite the disbanding of the Bodu Bala Sena and allied movements like the Ravana Balaya, continue to flourish in various ugly manifestations. Yet this is not the sole and simplistic answer to why and how the poll result in November 2019 went so definitively against the ‘yahapanalaya’ alliance. In fact, its use as a convenient cover for explaining away the ‘yahapalanaya’ defeat disguises a simple and unpalatable fact.

Lessons as to how a ‘victory’ can go wrong

For the seeds of that defeat were sowed by ‘yahapanalaya-ites’ themselves, right from the start. Those who ought to have maintained a vigilant watch on the 2015 Government instead succumbed to the lure of access to corridors of power or accepted lucrative positions for profit. This is a lesson in how an exuberant victory can go terribly wrong. Yet it is not as if we did not experience these lessons before. The 1994 ‘peace mandate’ of the Chandrika Kumaratunga Presidency was betrayed in very much the same manner after all, when vigilant voices became part of the ‘establishment.’ 2015 was therefore deja vu, in the very despairing sense of that term.

As was pointed out at the time, the first Central Bank ‘bond scam’ marked a hideous watershed not only in the fact of its ocurrence but in

the  cover-up that took place thereafter. The second ‘bond scam’ was inevitable, one year later. It was no answer to say these ‘scams’ had also taken place during Rajapaksa times. That was not what was expected from the 2015 change. At each and every turn, from the lack of publicly available procedures followed by the Constitutional Council in making its recommendations regarding appointments to key positions and bodies to the faltering anti-corruption process sabotaged by senior UNP-ers and an exclusively designed constitutional reform and transitional justice process that left the Sinhala as well as the Tamil citizenry in the cold, it was a series of grossly avoidable mistakes.

Thus, at the end of a bare two years of calamitous mishandling, it did not need ‘nationalism’ or ‘Sinhala-Buddhist majoritarianism’ to turn the political ride. The UNP leadership, in particular as it stood, became a toxic brand beyond the rarefied confines of Colombo. Further, the Sinhala electorate took manifest exception to antics of politicians ‘mis-leading’ minority parties in fancying themselves as kingmakers.

In sum, a long and hard look is in order as to why the November poll result came about. This is essential if we are to meet formidable challenges to Sri Lanka’s painfully demoralised democratic ideals as the New Year dawns.