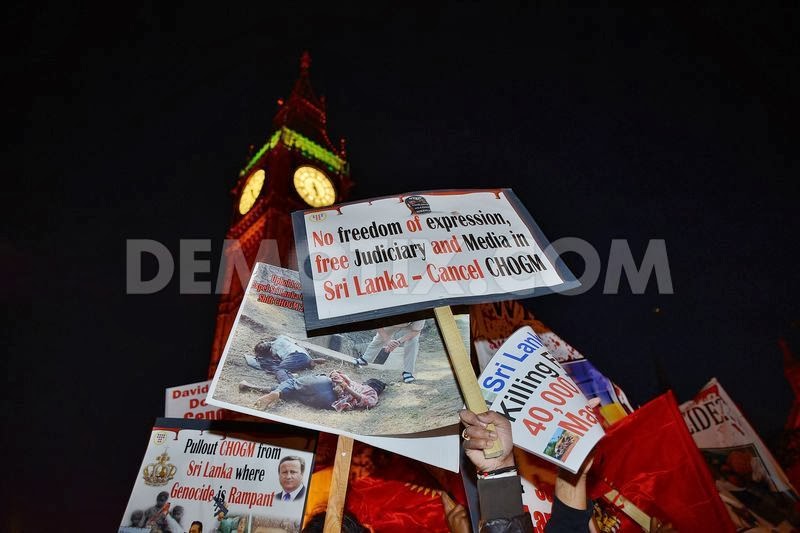 The insubstantial draft resolution on Sri Lanka that was released yesterday at the United Nations Human Rights council (UNHRC) has greatly disappointed and shocked the Tamil people, who are the primary victims of the ongoing conflict in the Island of Sri Lanka. The resolution text effectively calls for more of the same: it requests another update by the Human Rights Commissioner in a year’s time and makes another call on Sri Lanka to launch a credible domestic inquiry – despite the Human Rights Commissioner herself declaring that Sri Lanka has no political will to investigate itself.
Five years on from the terrible massacres of 2009, the Tamil people have been told to put up with another year of lost land, lost people, further curtailment of rights, physical and sexual abuse. A state that is moving in an “increasingly authoritarian direction”, according to the Human Rights High Commissioner, has inexplicably been given yet more time and space.
The resolution acknowledges the culture of “intimidation and retaliation against civil society members including those who met the High Commissioner during her visit”.  However, it fails to recognise that witnesses and evidence that the High Commissioner is yet to see are disappearing every day.  The Sri Lankan state now has even more time to complete its programme of destroying evidence and eliminating witnesses to the crimes committed.  The recently set up commission to inquire into “disappearances” demonstrates what can be expected from a local mechanism: relatives who lodged details of their missing ones were visited by Sri Lankan security forces and threatened with serious consequences if they did not withdraw their claims.
Furthermore, the whole narrative of the resolution takes away the focus from the root cause of the conflict.  As member states must surely be aware, behind diplomatic terms like ‘religious minorities’, ‘accountability’, ‘truth and justice’, ‘Northern Provincial Council powers’, and ‘land disputes commission’ lies an indisputably ethnocratic dimension to this conflict; however this is not explicitly recognised in the draft resolution.
At the end of the war in 2009, Tamil people lost hope in an international community and United Nations that, as the UN Secretary General has himself admitted, woefully failed to protect Tamil lives in Sri Lanka. However, although the two previous resolutions at the UNHRC, in 2012 and 2013, fell far short of the Tamils’ demand for truth and justice, these did rekindle some faith among the Tamil people that the international community would eventually deliver them justice. However, the resolution draft released yesterday has completely shattered this hope.
British Tamils Forum has been consistent and persistent in its call for an International Independent Investigation into war crimes, crimes against humanity and genocide – indeed, this is the collective call of all Tamil organisations across the world.
The UK Prime Minister David Cameron and his government have given us strong reassurances that they will ensure an international independent investigation takes place in Sri Lanka. Several other world statesmen have echoed these calls. In the past week there have been unambiguous calls for an immediate independent international investigation by several prominent NGOs, by the current UN Human Rights Commissioner, Ms Navaneethem Pillay, her predecessor and current President of the International Crisis Group, Ms Louise Arbour and the Christian churches in the North and East of Sri Lanka.
In this context, the draft text released yesterday is a painful slap in the face of all those victims who still await justice and a kick in the back for the weary Tamils of North and East Sri Lanka, who are trying to get on with their everyday lives in the face of escalating colonisation and militarisation of their lands. Furthermore, there is no doubt that such a meaningless resolution would undermine the Tamil people’s belief that engagement with the international community can serve any purpose in their decades-long struggle for peace, freedom and rights on the island of Sri Lanka.
British Tamils Forum, expressing its disappointment at this draft resolution, urges the UK government to heed the repeated requests of the Human Rights High Commissioner and to honour David Cameron’s promise to the British Tamil community – by ensuring that a robust and independent international investigation mechanism is announced in the resolution text ahead of voting on 26 March 2014.