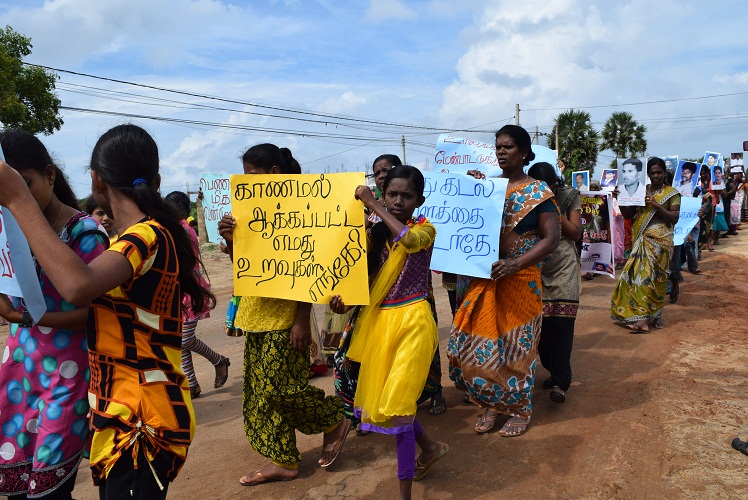 In a letter addressed to Sri Lanka’s Minister of Foreign Affairs, on 19 May the Tamil Civil Society Forum (TCSF) criticised the government’s lack of engagement with victims in setting up an ‘Office for Missing Persons’ (OMP). Stating that the “process to date has been handicapped by inadequate resources and has made very little progress,” the organisations said.. TCSF position is supported by  12 civil society organisations, and 12 individuals including those  from Tamil clergy.

Comments on the draft proposal to establish an OMP

We the undersigned organisations and individuals from the North-East of Sri Lanka submit as follows our view on the draft outline of the proposals put forward by the Prime Minister’s Secretariat and the Ministry of Foreign Affairs on the setting up of an ‘Office for Missing Persons’ (OMP). These proposals were put forward in a briefing held with selected civil society activists on the 9th of May at the Ministry of Foreign Affairs and a leaflet that was circulated by the Ministry on the 13th of May on the same.

Consultation with regard to all Transitional Justice Mechanisms including the OMP were entrusted with the Task Force on Consultations functioning under the SCRM. However in the design of the OMP the perception exists that the Foreign Ministry has taken over the consultation process. The mandate and terms of reference of the Task Force are extremely vague and the process to date has been handicapped by in adequate resources and has made very little progress. In the midst of this, the Foreign Ministry, it appears, is seeking to rush through a tokenistic consultation process on the OMP. The undermining of the Task Force by the Foreign Ministry makes clear the disdainful and instrumental use of the Task Force on Consultation. This runs contrary to the observations made by the Special Rapporteur on the Promotion of Truth, Justice, Reparations and the Guarantee of Non-recurrence following his visit to Sri Lanka in April 2015 wherein he noted that, consultation with those affected by the violations is essential and that they cannot be simply presented with ‘solutions’ in the design of which they were given no role.  In his observations on his second visit to Sri Lanka the Special Rapporteur noted that ‘consulting victims is crucial because it constitutes in itself a mode of recognition and respect – that people whose rights were violated, often in the most brutal ways, will be listened to respectfully and their views taken seriously as to the most effective ways of redressing those violations”.

The Government despite repeated requests has also refused to engage with victims who are abroad in the consultation exercise. (As to how the OMP will engage with these victims is also not clear). The Office of the High Commissioner for Human Rights in its Rule of Law Tools on Consultations raises the need to consult with all victims even those abroad. We are unfortunately forced to conclude that there is no genuine willingness to consult the victims on the part of the Government in the setting up of mechanisms for Transitional Justice.

We categorically state that an OMP that is designed without proper consultation with the victims and their communities would be unacceptable.

We are constrained in our ability to respond in detail to the substantive content of the proposals. The Foreign Ministry’s proposed consultation is being carried out with a two page leaflet that is quite insufficient on the details. A full draft of the proposals on the OMP should be made available for any meaningful consultation.

B.1. Missing Persons or Enforced Disappearances? : Not just about nomenclature

Enforced Disappearances is a recognised crime in international law whereas ‘missing persons’ is a generic term and may cover situations that do not amount to a crime. An example of the category of missing persons not falling under ‘enforced disappearances’ are Sri Lankan Army soldiers who are missing in action. The OMP’s mandate, if it is conceived as being part of the Transitional Justice process, has to be in relation to the crime of an ‘enforced disappearance’, at the the hands of the state, its security forces and non-state actors. The issue of soldiers missing in action is no less important, but should be kept distinct and should not be conflated with the crime of enforced disappearances. In this regard, the terminology of ‘tracing’ in the context of disappearances is problematic because it denies the fact that a crime has been perpetrated which must be investigated so that those responsible may be prosecuted. It is also not clear as to whether the OMP has been mandated to carry out investigations with a view to prosecutions. (It may be argued that this distinction is inconsequential given that the OMP does not deal with prosecutions. We refer to the artificiality of this dichotomisation in B.4)

B.2. Composition of the OMP:

Without international involvement in the OMP it will be extremely difficult for the victims to place faith in the institution. Given that the Sri Lankan Armed Forces are to-date involved in threatening victims and activists in the North-East and the veneration accorded to them by most if not all major political actors in the South, it will very difficult to envisage willingness and imagine the possibility of an OMP made up of exclusively Sri Lankan nationals, undertaking a vigorous process of evidence collection and tracing. For example, it is difficult to conceive how the OMP made exclusively of Sri Lankans, in the current power imbalance, will have the moral and practical courage to enter camps and prisons and properly investigate alleged acts of disappearances. The OMP will be sufficiently empowered to be independent only when qualified foreign individuals known for their integrity, independence and professionalism are included in its composition. We wish to stress that this is the underlying rationale of the hybrid process recommended in the OISL report and the UNHRC Resolution of March 2015 and that it should apply to all aspects of the transitional justice process.

We would recommend that the Government approach the UNWGED and or the OHCHR to recommend suitable names for appointment to the OMP. We also recommend that one half of the membership of the OMP is drawn from such a process. We also wish to emphasise that representatives of the victims and an adequate number of Tamils and Muslims with strong links to the community with lived experience in the North-East should be appointed to the OMP. Gender balance should also be a key consideration in designing the composition of the OMP.

B.3. The Appointment Process:

B.4. Prosecutions and Justice:

The leaflet issued by the Foreign Ministry says that prosecutions relating to enforced disappearance will be dealt with by ‘another mechanism’. For reasons explained below this ‘other mechanism’ we fear refers to the current organisational apparatus for criminal prosecutions – the Police, Attorney General’s Department and the Judiciary who have no credibility or willingness to investigate these serious crimes. No explanation has been provided for such dichotomisation of the tracing and prosecution aspects in addressing enforced disappearances. The International Convention on Enforced Disappearances, which Sri Lanka is signatory to, provides that the state is obliged to investigate acts of enforced disappearance and bring those responsible to justice.

As will be recalled the UNHRC Resolution is most explicit in its calling for foreign participation in the judicial mechanism. It is with regard to this commitment that the Government has been wavering ever since the resolution was passed, with the President suggesting that no foreign judges will be allowed. Given the above, it appears that the Government is keen on postponing the issue of prosecutions, while wanting to appear to be acting on setting up the OMP. This approach of focusing on the OMP first, we fear has been adopted for an instrumental purpose – to give the impression to the UNHRC, which is scheduled to hear an oral report from the OHCHR on the implementation of the March 2015 resolution, that progress is underway. The Government before setting up the OMP must state unambiguously its policy approach on the question of judicial prosecutions and as to whether they intend to honour those commitments laid down in the UNHRC resolution.

We note with concern that the leaflet provides that the OMP will have discretion on the decision to share information received by it with the families of the victims. That this is not mandatory reduces the OMP’s usefulness even as a truth seeking institution. The families of the victims have a right to know and this cannot be compromised. Furthermore the Government is obliged to ensure that victims of enforced disappearance or those directly affected by it have a right to obtain reparation and compensation.

The Assistance to and Protection of Victims of Crimes and Witnesses Act, as was acknowledged in the UNHRC Resolutions, falls far short of providing adequate protection. Those authorities from whom protection is required find representation in the National Authority established under the Act. Out of the twelve members of the authority seven are ex-officio and represent different organs of the state including the Police and the Attorney General’s Department. Given that the relatives of the disappeared are desperate for information it is likely that they will engage with the OMP even without adequate witness protection. But the Government should not take this for granted. It is the Government’s responsibility to put in a proper mechanism for witness and victim protection.