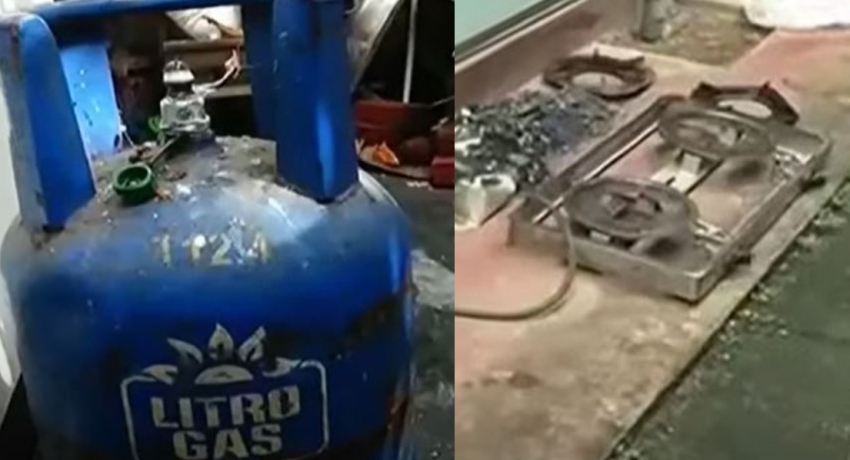 A distressing sight in the village of Waligamuwa in Sri Lanka’s central district of Matale last weekend brought home a sombre truth: that lofty ideals such as accountability are perhaps destined to remain abstract concepts and not much more.

Villagers had gathered to mourn 53-year-old Ashoka Priyangani, a mother of four who’d succumbed to burn injuries from a cooking gas-related explosion in her own kitchen. Her family, friends and neighbours were seen gathered round the coffin, angrily protesting and demanding justice from wherever it might come.

The unsuspecting Priyangani had been going about her morning culinary ritual when an explosion caused her severe burn injuries that would soon prove fatal. Her family had rushed her to Kandy hospital, where she died leaving behind a family of five.

Priyangani’s grieving widower now has but one goal: to take both the government and the gas company to court.

The liquid petroleum (LP) gas explosion that ended Priyangani’s life was no isolated incident. A wave of such explosions, fires and related incidents in the last 48 days has shaken Sri Lankans, a vast majority of whom are already battling worsening crises across multiple fronts.

According to police, nearly 730 incidents have been recorded from November 01 to December 15. Of these, 24 explosions were due to gas leaks directly from the cylinder while the rest were, according to authorities, due to subpar cookers or accessories such as regulators and hoses.

A majority of the incidents were linked to LP gas sold by the state run Litro Gas Lanka Ltd.  Litro maintains a duopoly on cooking gas supply in Sri Lanka with Laugfs Gas (Pvt) Ltd.

“Can’t the government or the Consumer Affairs Authority (CAA) advise the public to stop using gas until they clear this mess up?” news footage showed a relative of Priyangani’s as saying.

Over six weeks after the first explosion, Sri Lanka’s Court of Appeal on Friday (17) ordered the gas companies to recall LP gas cylinders in the market and replace them free of charge with cylinders approved by the Sri Lanka Standards Institute.

The court also ordered that both Litro and Laugfs maintain a mix of 70 percent butane and 30 percent propane in the LP gas cylinders they sell, following unverified speculation that a change in composition was the reason for the explosions.

Experts have hypothesised that increasing the propane content of the cylinder to 50 percent had resulted in high pressure which had led to leaks from the cylinder. However, this has yet to be proven scientifically.

The court orders notwithstanding, no one has yet taken responsibility for the series of reported incidents let alone the death. Authorities have also yet to determine the exact cause of the explosions, and, despite the existential threat posed to millions of Sri Lankans, critics claim, no concrete steps appear to have been taken.

Public confusion over the bizarre explosions is rising and frustration over the apparent lack of accountability appears to be setting in the face of alleged government inaction.

A group of ruling Sri Lanka Podujana Peramuna (SLPP) members were seen praying at the Seenigama Dewalaya earlier this week, seeking divine retribution on the gas companies who had “endangered the lives of consumers”. Short of this, no concrete action appears to have been taken, critics say.

The Consumer Affairs Authority (CAA) has also largely remained mum about the explosions though parliament has seen hearted arguments over the matter, even as explosions continue in various parts of the country.

“Nobody clearly tells about what is really wrong with gas,” SLPP MP Anura Priyadharshana Yapa told the media this week when he was asked to comment. Yapa is now critical of the government.

“If it is in another country, the board of directors (of the gas company) would have been dragged by their ears and arrested. Now they pretend as if they don’t know anything. This will lead the country to anarchy,” he said.

Friday’s Court of Appeal decision saw the gas companies ordered to revert to the earlier 30-percent propane composition and also have the Sri Lanka Standards Institute oversee the quality of gas being distributed in the country.

Critics, however, claim that the damage has already been done.

Already the two gas suppliers have ceased distribution in the market. Many consumers have now switched to kerosene. The demand for kerosene has risen by 100 metric tons in the past two months, the state-run Ceylon Petroleum Corporation (CPC) said.

Asela Sampath, the chief of the All Island Canteen Owners’ Association (AICOA,) said on Friday that more than 80 percent of canteens and hotels will be closed from Saturday (18) onward as a result.

Meanwhile, an LP gas shipment from Bangladesh had been docked in the Colombo port owing to a quality issue. The government later directed Litro not to buy the consignment as it does not meet the standards. However, on Friday, the Secretary to the Ministry of Technology reportedly granted permission o unload gas after he tested a sample aboard the ship.

“We cannot ascribe a monetary value to a life that was lost. We have asked these companies to do justice by them. We will also take part in that,” Consumer Affairs State Minister Lasantha Alagiyawanna told the media this week.

“We are doing our best to solve this matter as quickly as possible.”

Litro, for its part, rejects the government’s allegations. The state-run gas company maintains that it had nothing to do with the recent spate of explosions.

“It’s too early to comment on who will take responsibility for the death as investigations show a completely different result as opposed to a gas explosion. So further investigations are going on,” a Litro official told EconomyNext requesting anonymity as they were not authorized to comment on the matter.

Meanwhile, police confirmed that Priyangani’s death was due to a gas explosion, but noted that investigations are still under way to determine the exact cause of the incident.

“According to hospital reports, the patient had died due to severe burns from the incident. The gas pipe and other [accessories] have been sent to the government analyst for a report,” police said in a statement.

Police also said it was suspected that the end of hose connecting the cylinder to the stove had become loose and a leak had occurred while the stove was already lit. The fire must have gone through the pipe because the gas supply had not been cut off from the regulator, police said.

According to writer and analyst Vinu Wijesekara, Sri Lanka consumes over 440,000 metric tons of LP gas annually. Approximately 42% of the population exclusively uses gas cylinders for domestic purposes while 43% use firewood alongside LP gas and 13-15% of the population exclusively uses firewood, Wijesekara wrote to the privately owned Daily FT in 2018.

Litro controls 80 percent of the market while only other competitor Laughfs controls the rest.

The government has contemplated plans for the CPC to open another state-owned LP gas company, but the plan has been put on hold due to financial constraints of the country, which is facing an increasing risk of sovereign debt defaults.

“This unfortunate death could have been prevented if the authorities had taken necessary and timely action to monitor the quality of gas cylinders & ensure the safety of consumers,” Human Rights lawyer Bhavani Fonseka told EconomyNext.

“Questions must be asked as to why authorities failed to take action that could have prevented the explosions.”

Fonseka, a government critic, also said relevant officials must be held to account and the affected parties should consider making a police complaint so that an investigation takes place that is the first step pertaining to criminal action against those responsible.

“Additionally, affected parties can also explore filing a case in the Supreme Court in terms of violating their fundamental rights. These are some measures that can be taken to obtain redress and justice for the victims.”

Questions must also be asked pertaining to the regulatory framework governing gas cylinders and why authorities were unable to ensure the safety that is required of such products, she said.

“Recent months have also seen officials formerly with the Consumer Affairs Authority commenting on discrepancies with such entities and the need for urgent reforms. Questions should be asked as to whether such reforms have taken place and the impact on the rights of citizens,” she said.

“It is incumbent on the opposition, civil society and media to keep attention on this issue and insist that there is a thorough investigation and accountability. Public pressure is also required to ensure the state and private actors adhere to quality control standards and that the rights and safety of consumers are given priority,” she added. (Colombo/Dec18/2021)