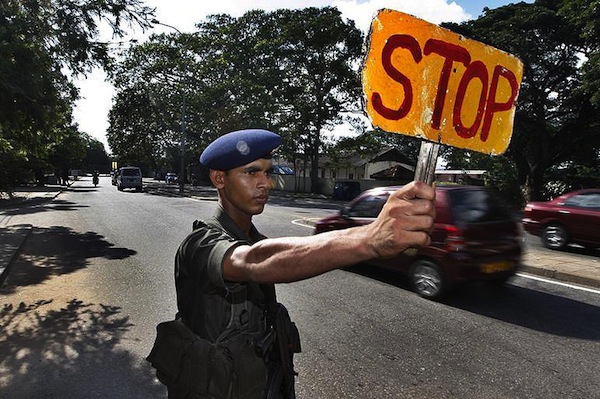 Image: A file photo of a military checkpoint in Colombo.

The proliferation of Sri Lankan military checkpoints, illegal fishing by Sinhala fishermen with the assistance of the navy and the army takeover of a hospital for a COVID quarantine centre are amongst some of the many measures that are impacting on the livelihood of Tamils in the North-East, said Tamil National People’s Front (TNPF) lawmaker Selvarajah Kajendren.

“Only one functioning hospital exists for 12,100 members of 4000 families of Vadamaradchi East, including nearly 3500 students,” he told parliament in a speech last week.

“This sole hospital has been taken over for COVID quarantine purposes and the alternative provided is a 100ft dilapidated building filled with animal waste, which is now functioning as the OPD.”

“This is a deliberate attempt to drive people away from Vadamaradchi East, by depriving them of their medical care. No basic facilities were provided to them and the hospital has been taken over recently citing the lack of resident patients.”

His comments come amidst a second spike of coronavirus infections on the island, which has seen the government deploy the military. The Sri Lankan response has already come under criticism for endangering human rights, with many Tamils protesting against the military takeover of facilities in the North-East to serve as coronavirus detention centres.

The parliamentarian went on to outline how the military’s facilitation of Sinhala fishermen was impacting on livelihoods in the same region.

“Livelihoods of 4000 families of Vadamaradchi East, mostly fishermen, have been systematically destroyed by the government with Southern Sinhala fishermen allowed to engage in illegal fishing, with the assistance of Ministry of Fisheries, the Navy, and Police,” he said.

Earlier this year “villagers of Mandatheevu protested and foiled an attempt by the Navy to appropriate private land belonging to 3 persons in Mandatheevu,” he added. “To-date the land has not been returned to the owners.”

Kajendren also commented on the proliferation of military checkpoints across the Tamil homeland. “On a 88 km stretch of road from Paranthan – Kokkilaai, the military has set up 9 check points, harassing travellers, even stopping ambulances and school children,” he said. “These checkpoints should be removed immediately.”
TG