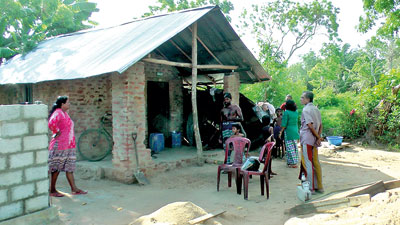 This week, a small child died of malnutrition in Tissamaharama at the same time that Sri Lanka’s Parliament debated the passing of millions of public funds to purchase luxury vehicles for Ministers as well as former President and current Opposition Leader, Mahinda Rajapaksa. Laid out in her white coffin, dark and pitifully small, her mother and father could only weep that they tried to provide for their family as best they could. Another child, when asked what he had for food that day, said ‘boiled rice,’ smiling all the while in contrast to the agony of his spoken words.

Sri Lanka resembles this wretched child, cut down scarcely before the country was able to grow to full strength from its immediate post-independence promise. Make no mistake about this. The skeletal remains of our so-called two thousand five hundred year old civilization are already being laid out in the coffin. Bereft of enlightened political and religious leadership, menacingly dark tides of venom and hatred are being indulged to the point of insanity as its poor is pushed to the edge of existence.

The skeletal remains of our nation

There is a palpable irony at play. Those who were killed in the Easter attacks by jihadists in April this year were predominantly Catholic and Christian. To their credit and despite other misjudgements, (political or otherwise as the case may be), the head of the Catholic Church and his priests moved swiftly to console their flock, urging calmness and restraint. A few days ago, Cardinal Malcom Ranjith, addressing the media in Rome, faltered as he spoke of Sri Lanka’s ‘empty houses’ of death in Katuwapitiya and elsewhere. But are the dead not being mocked now as senior Buddhist priests act in supreme defiance of the compassionate teachings of the Gautama Buddha, quite apart from politicians quarrelling as to who will next steal from the public purse?

Perhaps the Cardinal, even as he acknowledges that this is a Sinhala-Buddhist country, may bestir himself to also underscore the fact that men of religion must not make shockingly communal statements. It was bad enough that a ranking high member of the Buddhist clergy once called upon a Hitler to rule the land. But what we hear now is infinitely worse, indicating that overtly racist sentiments are not confined to the ‘lunatic fringe’ of the clergy, as some mistakenly believed. If the Easter bomb blasts killed people and destroyed families, this disunity is killing the nation itself. All right thinking Buddhists should surely deplore this fact.

In part, much of this is to do with the fact that there is a perceptible vacuum in Government. The ‘yahapalanaya’ coalition, led by miserably petty men, has not only spectacularly failed in its 2015 promise but also paved the way for instability that is infinitely worse than what we had previously encountered. While the Sri Lanka Freedom Party seems non-salvageable, at least the United National Party has a good second tier of capable men and women. Democratic inner-party governance must be allowed, the party leader and his inner circle of favorites must relinquish their tight grip on power at least now. Indeed, their uncritical civil society backers who enabled much of the 2001-2003 mistakes of the United National Front administration to be repeated, must turn the searchlight inwards. It is not enough to apologize, as one civil society pundit did recently for bringing the ‘yahapalanaya’ regime into power. Naivete and stupidy are costly mistakes to make when a nation’s fate is at stake. Neither has the Rajapaksa camp shown any signs of redemption. On the contrary, cacophonous racial cries of its flag bearers whip up even more tensions. Are these the next rapacious and communal ‘guardians’ of this land?

The East is a power keg, waiting to blow

As the focus turns elsewhere, the actual focus of accountability for the Easter Sunday attacks is obscured. This Tuesday, the former OIC of the Kattankudy Police Station testified before the Parliamentary Select Committee looking into the April terrorist attacks that the bomb blasts were like ‘a tsunami’ where mistakes were made clear only after the event. Both he and his successor confessed, unbelievably, that the terrorist character of the man who carried that attack out was not evidenced to them. This is all of a piece with the earlier statement by their boss, the former Inspector General of Police (IGP) that gross negligence of the police and political command was a ‘system failure.’ However the truth is far from it. This tragedy occurred because senior policemen and politicians were too tempted by riches being waved in their faces to care about the palpable growth of jihadist cells right under their feet.

This is the only explanation as to why the two police officers could only stammer and stutter when questioned by the Select Committee on evident dereliction of their duties. Incredulously we were told that Kattankudy was, to all accounts, a most peaceful place though the evident Arabization of the town and environs were admitted, albeit with some reluctance. But as former Army Commander Sarath Fonseka’s questions (often the most sensible in the Committee) revealed, there was no point in asking suspects out on bail, to report weekly to the police station if the police did not monitor them beyond that nominal reporting.

And though politicians are now breathing fire and brimstone re Former Easter Province Governor M.L.A.M. Hizbullah’s so-called ‘Shariah University’ in the East, the question remains as to how such stupendous amounts of money were brought into the country from dubious ‘foundations’ and the like in Saudi Arabia in the first place? It is still doubtful if the money was a gift or a loan. How were procedures in regard to vetting the commencement of this ‘educational institution’ and the acquisition of land for that purpose brushed aside so easily? Taking the institution over by the Government will not suffice. Clearly, powerful men with vested interests were allowed to run riot in the East as both Sinhala and Tamil politicians looked the other way. It is little wonder therefore that some parliamentarians were chased from peoples’ protests asking for a separate and upgraded Divisional Secretariat for Kalmunai North on Thursday to administer to Tamil inhabitants of the area who, they say, are being discriminated against in relation to their Muslim neighbours. For years, these protestors had been asking for their grievances to be listened to, with little success. Consequently, the East is a power keg, waiting to blow.

No public confidence in the system of law

Meanwhile, selective enforcement of the law continues. Writers who critical assess Buddhist practices that are violative of the Buddhist doctrine itself are arrested and harassed. However, Buddhist priests who engage in hate speech are left unscathed. This is why a contemplated new hate speech law must be resisted at all costs. Social media and online websites mayallow free rein for idiots, zenophobes and communalists to run riot and mainstream media may engage in rampaging hate speech. But as long as the implementation of law is discriminatory, fundamentally violating the Constitution, new laws will be useless.

We are abandoning even the slim pretence that this country respects the Rule of Law. Very soon, all will be swept along in this dark tide that threatens to engulf us, carrying with it the sad detritus of the promise of a new beginning in 2015. Will this foul current stop flowing only when Sri Lanka is reduced to a pariah state, when our economy, our systems and our institutions are reduced to nothingness after the best leave the island’s shores and when we have just our dark hate left to us?