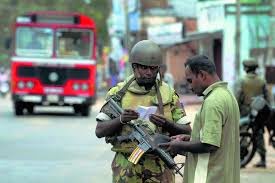 Meera Srinivasan
Northern Province CM says the ‘story’ of LTTE re-emergence is being floated to justify the heavy military presence. The Sri Lankan army has heightened security in the country’s Northern Province through a host of measures, including vehicle checks, it is learnt. Jaffna Security Forces Commander Udaya Perera said the move was aimed at preventing a possible regrouping of LTTE sympathisers. “We hear that sections of the diaspora are funding some of those elements here,” he said. The “precaution,” he said, was also necessary to nab a suspect still at large, after a recent incident in Kilinochchi where he reportedly opened fire on a policeman.
The army has maintained that the suspect, Gobi, and an associate, Appan, had links with sections of the Tamil diaspora reportedly working on reviving the LTTE, the Tamil militant outfit defeated in Sri Lanka’s brutal war that spanned nearly three decades. “There is no popular support for such regrouping, but such forces may exploit vulnerable communities in the north. We will not allow that,” Mr. Perera told The Hindu on Monday.
Northern Province Chief Minister C.V. Wigneswaran said the story [of the LTTE re-emerging] was being floated in order to justify the heavy military presence in the north. Observing that the story was “very weak”, he said many unanswered questions remained about the suspect Gobi, the policeman said to have been injured when he reportedly opened fire, and the delay in nabbing him.
“We have been repeatedly asking the government to confine the military in the north to the barracks, but the government does not want to demilitarise the north. This story is only to justify that,” Mr. Wigneswaran told The Hindu.
Meanwhile, Sri Lankan police have announced a reward of LKR one million for anyone providing information leading to the arrest of the two, said the state-run Daily News here on Monday.
According to reliable sources in Jaffna and the Vanni, the heightened surveillance — coupled with an emerging refrain about a possible regrouping of the LTTE — has made people nervous.
It all began on March 13, when police arrested Balendra Jeyakumari, a resident of Tharmapuram at Kilinochchi, and her 13-year-old daughter Vidushika, on charges of sheltering Gobi. The mother and daughter were regular participants in rallies on disappearances, highlighting the case of Jeyakumari’s son who reportedly went missing in 2009. She still remains in custody while the daughter was put under probationary care.
On March 16, police arrested prominent human rights activist Ruki Fernando and Fr. Praveen, a catholic priest working the area, under the Prevention of Terrorism Act (PTA).
They were released in a couple of days, following pressure from several international rights watchdogs. Coming on top of the arrests, the heightened security has created fear and panic among many in the north, according to an activist, working with women’s groups in the region.