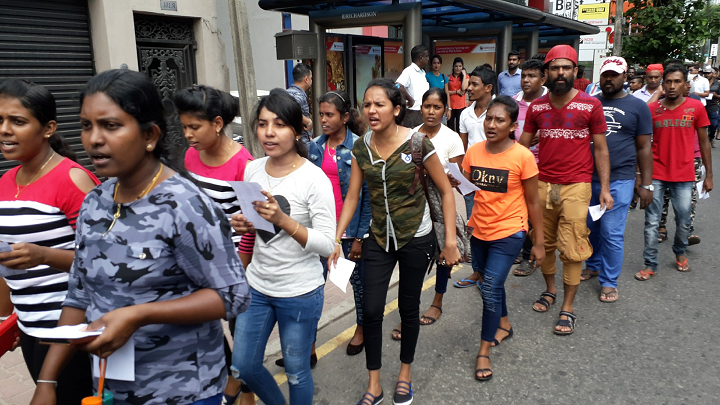 File photo: ATG workers marched towards PM’s office to hand over a memorandum (2019).
On the 20th of August, 2021, ATG-Wathupitiwala, unfairly dismissed 16 workers for forming a Union with the Commercial and Industrial Workers Union.
It has been almost one month, and the Company has refused to take back workers and continue to act illegally despite the Labour Commissioner directing ATG-Wathupitiwala that the Company cannot dismiss workers under the law in this manner. The 16 workers to date remain without an income whilst the ATG-Wathupitiwala continues production unaffected despite continuing to act illegally by not reinstating the 16 workers.

Yesterday 23 Trade Unions wrote to the Minister urging him to intervene and ensure that the 16 workers are reinstated in to their jobs.
In the year 2017, there was a similar Union busting Incident which was reported in ATG-Katunayake. Despite cases for Unfair Labour practise being filed in the Magistrates Court by the Labour Department, the cases are yet to conclude.
Read here: Sri Lanka: Workers at glove factory strike over alleged union-busting by management
Despite the Industrial Disputes Act making ‘Union Busting’ a punishable offence, to date very few cases have been filed by the Labour Department on Union busting in the Magistrates Court. In my opinion Union busting and the threat of losing their jobs if Workers join Unions remain the single most reason why workers do not Unionise within Factories in the Free Trade Zones.
Freedom Association is suppressed by Factories in the Free Trade Zones through Union busting activities which is rarely checked by the State.
Share
Facebook
Twitter
WhatsApp
Pinterest
Email