SRI LANKA: Yet another man is killed by the police

The Asian Human Rights Commission (AHRC) has received information that on 20 May 2012, M.D. Kalum Priyanath, a disabled labourer, went to a local temple to help a monk run an errand. At 12pm, as he was returning home, Mr. Priyanath was arrested by the police and taken to Welikanda Police Station. According to police officers, Mr. Priyanath was in possession of marijuana, and was found dead in his jail cell at 1pm as the result of a head injury caused by a fall. Mr. Priyanath’s relatives believe that Mr. Priyanath was severely tortured and killed by the police. Indeed, the report of a Judicial Medical Officer state that Mr. Priyanath’s body sustained bruises, swelling and severe bleeding to the back of his head. Despite the fact that the family has filed complaints with the Human Rights Commission of Sri Lanka (HRCSL), the Inspector General of Police (IGP), Senior Superintendent of Police (SSP), Assistanct Superintendent of Police (ASP) of the Polonnaruwa and to the National Police Commission (NPC,) each of these organizations have failed to initiate credible, impartial investigations into Mr. Priyanath’s death. This case is yet another illustration of the exceptional collapse of the rule of law in Sri Lanka.
CASE NARRATIVE:

According to information that the Asian Human Rights Commission (AHRC) has received, Mr. M.D. Kalum Priyanath or Thushara (31) of No: 76, Meethrigama, Aselapura, Welikanda in Polonnaruwa District was illegally arrested, detained and extrajudicially killed by police officers attached to the Walikanda Police Station on 20 May 2012. His relatives have stated that Officer Nimal and Officer Borawewa who are attached to Welikanda Police Station have played a part in this grievous crime. Mr. Priyanath was married with two children. He was physically disabled, but held a job as a labourer. 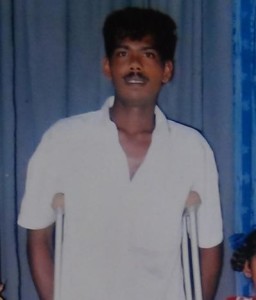 ADDITIONAL COMMENTS:
The Asian Human Rights Commission has reported innumerable cases of arbitrary arrest, detention, torture and extra judicial killings cases of citizens at the hands of the police, at different police stations across the country. This practice is illegal under local and international law. The Asian Human Rights Commission has observed that the Sri Lankan police have used torture as an instrument to terrorize innocent people and harass the public for their own personal and professional gain. Moreover, Sri Lanka’s police are implementing a policy handling crime in which they arrest and kill suspected criminals, rather than producing them before a court of law.

The Constitution of Sri Lanka has guaranteed the right to freedom from torture to every citizen of the country. According to Article 11 of the Constitution, “No person shall be subjected to torture or to cruel, inhuman or degrading treatment or punishment.” Furthermore, Article 13(4) “No person shall be punished with death or imprisonment except by order of a competent court, made in accordance with procedure established by law. The arrest, holding in custody, detention or other deprivation of personal liberty of a person, pending investigation or trial, shall not constitute punishment.” Article 13 (5) guarantees the right of presumption of innocence until being proven guilty. Each of these provisions have been violated in this case.

Sri Lanka has signed and ratified the International Covenant on Civil and Political Rights (ICCPR). Nevertheless, the lack of protection offered to those who are willing to take cases against abusive police officers and the state authorities, means that the law is under-used, and continues to be employed as a tool by the police to harass people. Not only does this take a long-term toll on the victim and his or her family, but on society as a whole. The state’s lack of protection of those who are working to make the provisions enshrined in Sri Lanka’s constitution a reality undermines civilian respect for the law and encourages impunity.