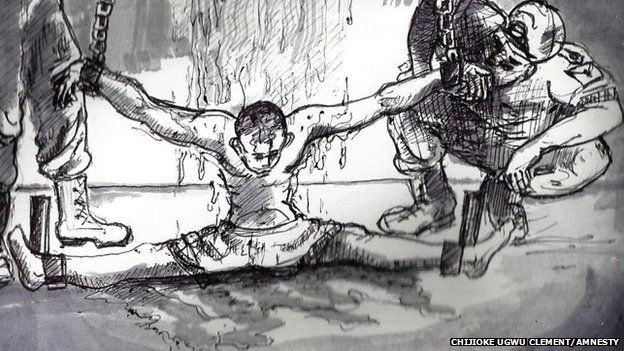 The Committee had come to the conclusion that torture is “a common practice carried out in relation to regular criminal investigations in a large majority of cases by the Criminal Investigations Department of the police”, regardless of the nature of suspected offences.

The Committee has made the following recommendations regarding arrest and detention of suspects:

“…Make the necessary legislative amendments requiring the police to
obtain an arrest warrant issued by a judicial authority in order to conduct an arrest, except in cases of flagrante delicto;
Ensure that detained persons are promptly brought before a judge
within the time limit established by law, which should not go beyond 48 hours;
Ensure that arresting officers register the exact date, time, ground for
the detention and place of arrest of all detained persons. The State party should ensure that compliance with the detention registration system is closely monitored and penalize any officers who fail to adhere to it or to ensure that their subordinates do so;
Establish effective prosecutorial oversight over the police’ actions during
investigation and improve criminal investigation methods to end practices whereby statements obtained during police interrogation are relied on as the central element of proof in criminal prosecutions;
Remind judges of their duty, whenever they have a reason to believe that
a person appearing before them may have been subjected to torture or duress, to actively ask the detainees about their treatment during detention and request a forensic examination. The competent authorities should hold responsible those persons whose duty is to apply the law, including judges who fail to respond appropriately to allegations of torture raised during judicial proceedings;
Install video surveillance in all places of custody where detainees may be
present, except in cases where detainees’ right to privacy or to confidential communication with their lawyer or doctor may be violated. Such recordings should be kept in secure facilities and be made available to investigators, detainees and lawyers;
Encourage the application of non-custodial measures as an alternative to
pre-trial detention. …”

The Committee has urged Sri Lanka to ensure that all allegations of unlawful detention, torture, and sexual violence by security officers are promptly, impartially, and effectively investigated by an independent body. The Committee urged Sri Lanka to publish a full list of all Gazetted Detention Centers, close down any unofficial ones still in existence, and ensure that no one is detained in unofficial detention facilities as this practice is per se a breach of convention.

This recommendation of the Committee, on establishment of an independent body to investigate allegations of unlawful detention, torture, and sexual violence, is of great importance in the context of Sri Lanka. The situation that prevails at the moment is that most of the complaints of such violations are not being investigated. Often, it is the Assistant Superintendents of the Police (ASPs) who receives the complaints because at the local police stations where such acts are committed, it is almost impossible to register a complaint. The Assistant Superintendents of Police, in most of the instances, attempt to bring about compromises with the final aim of exonerating the officers against whom such complaints are made. In the light of the CAT Act No. 22 of 1984, acts of torture constitute a grave offence in Sri Lanka. However, this grave offence is not investigated as a crime in most instances. The senior police officers treat allegations against their subordinates as a nuisance. The unwritten rule that is almost universally practiced in Sri Lanka is that no criminal investigation can be conducted without torture and ill-treatment.

Therefore, the ASPs, and even those who are of higher ranks, are fully aware that torture takes place routinely and they treat it most of the time as a necessary institutional practice. When the pressures are brought on such high-ranking police officers to investigate torture, what they often do is to create a show of taking some action by such acts as transfer of some policemen temporarily, but virtually transform the entire investigation into a farce. The problem that needs to be dealt with, in ensuring a proper investigation, is to take such investigations out of the hands of such high-ranking police officers. This could be done only if an independent investigating body is available. However, all the governments in the recent past, including the present government, have been determined not to allow the creation of an independent body for the investigation against the police or other security officers. Thus, there will be a great conflict between the Committee’s recommendation for the creation of an independent body for investigations and the government’s determination not to create such an independent body.

If the CAT Committee recommendations are to yield any positive result it will depend primarily on the appointment of an independent body to investigate torture and ill-treatment and also issues like unlawful detention and sexual abuse. On the other hand, this will most likely not happen. How are we to resolve this conflict between a dire need for investigations into illegal acts committed by the police and the non-availability of an independent and credible investigating authority to investigate such acts? This will mostly depend on how much effort can be generated by the civil society to pressurize the government to appoint such an independent investigative authority.

However, the problem is that even the civil society organizations have not yet taken the issue of prosecuting offences relating to torture and other abuses of human rights seriously. It is only a few organizations and individuals who have dedicated themselves earnestly to document the acts of torture and the failures of the State to prosecute such offences. If there is to be a successful outcome, all major civil society organizations, such as the Organization for a fair society – “Sadharana Samjayak Sandhaha Vyaparaya” and all other such organizations should begin to highlight the need for such an independent authority. Much will depend also on the kind of media interest that can be generated in pursuing the implementation of recommendations made by the CAT Committee.

The Committee has also made some serious observations on the participation of Mr. Sisira Mendis, the Deputy Inspector General of the Criminal Investigations Department, as a member of the Sri Lankan delegation that participated at the 5th Session of the CAT Committee on Sri Lanka.

The Committee has observed as follows:

“… Bearing in mind the findings of the OISL that the Sri Lankan security forces committed widespread or systematic torture, enforced disappearances, and other serious human rights violations during and in the aftermath of the internal conflict, the Committee is seriously concerned at the failure of the State party to carry out an institutional reform of the security sector. In this regard, the Committee was alarmed by the presence of the Chief of National Intelligence, Sisira Mendis, as part of the Sri Lankan delegation, since he was the Deputy Inspector General of the Criminal Investigations Department (CID) from March 2008 to June 2009. The Committee observed that Mr. Mendis is named in the OISL Report, which notes that the CID’s “4th Floor” facility at police headquarters in Colombo was known as a notorious site of torture. The OISL report also recounts allegations of widespread torture, including sexual violence, perpetrated against individuals detained at Manik Farm camp and elsewhere in the aftermath of the conflict by personnel of the CID and the Terrorism Investigation Department (TID) over which Mr. Mendis also allegedly exercised supervisory authority until June 2009. In this connection, the Committee deeply regrets that neither Mr. Mendis nor any other member of the delegation provided information in response to the many specific questions raised by the Committee on this subject during the dialogue with the State party and in its written additional information provided to the Committee….”