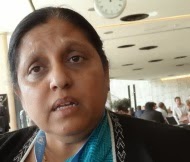 Complaint made to the HRC-SL and IGP by Dr. Nimalka Fernando

The radio programme titled Rata Yana Atha (The way country is forging ahead) broadcasted in the Commercial Channel of the Sri Lanka Broadcasting Corporation on 4th November 2013 was based on a voice cut given by me to the Hiru TV to be relayed in the HARD TALK segment during the daily news bulletin. I had listened to the original version of the HARD TALK relayed on Sunday 3rd of November by HIRU TV.

On 4th November morning I received several telephone calls from friends and relatives stating that a statement made by me to HIRU TV is being used in a radio programme of the SLBC in an improper manner including causing threat to my life. According to them what was said in this programme was going to cause a real danger to my life.

Since the telephone calls received were of serious nature taking note of their concerns I decided to switch on the radio to listen to this particular programme around 9.00am on the 4th. I listened to the programme for about 30 minutes. What I heard was so violent , defamatory and stressfulI and I had no mental strength to continue to listen any further. The synopsis of what I heard is given below:

The main title of the Programme was `Stoning the Sinner Woman’

Broadcast: Sections of what I said in the Hard Talk interview

`See what she has done’

Then calls were taken. I am writing only what I remember though much more abusive and defaming statements were made by the callers , Mr Hudson Samarasinghe and a person called Gayan who was present in the studio as the compeer of the programme:

Call 1: “ We can not allow persons like Nimalka Fernando to live in this society”

Call 2: “ We use insecticides to eliminate the spread of mosquitoes. Some mosquitoes
develop a resistance to such spray. These people are like that. We have to find a method to destroy them.”

Call 3: “If we do something to them the government will be blamed by the human rights people. We should use a lorry and cause an accident.”

Call 4: “ There is something call cleaning in the army. Mr Gotabaya knows this. We should hand her over to the cleaning system.”

Call 5: “Chairperson, today you have started a good activity. Continue this upto March 2014 and begin to deal with the NGO clan one by one.”

While callers were making such statements Mr Hudson Samarasinghe was actively involved in supporting the ideas expressed to eliminate me. The words he used welcomed such ideas as well as endorsed them. The person called Gayan too (present in the studio) joined him agreeing to the ideas and facilitated the calls.

Most of the callers were men. During the 30 minutes at least 3 of them identified themselves as those who had served the armed forces and retired. Another caller said that he has a friend who was injured during the war.

Some callers also mentioned names of Vickramabahu and Lal Kantha who are political leaders in Sri Lanka who have expressed fearlessly their positions publicly. They were of the view that `the society has not taken action against them’.

Mr Hudson Samarasinghe who is the Chairman of the Sri Lanka Broadcasting Corporation did not stop the callers from making offensive and derogatory statement nor spreading such violent ideas against me. He did not disassociated himself from these comments which called for my annihilation. I heard a caller referring to me as a prostitute. The Chairperson of the SLBC encouraged all these comments and further encouraged openly defamation and my annihilation.

The totality of this programme is the creation of a dialogue through a government media to destroy my life.