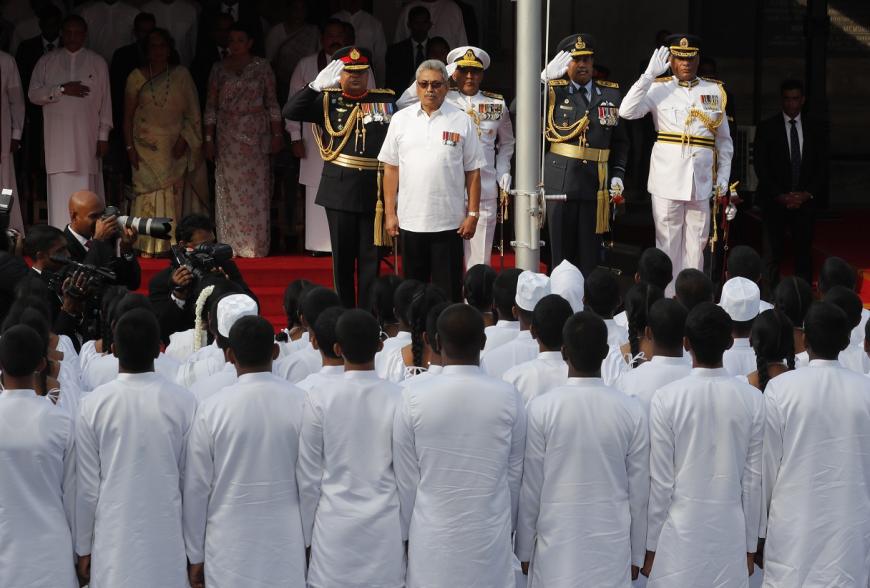 As the Sri Lanka Podujana Peramuna (SLPP) is reaching its first year of governance, which some may call non governance, the question that may be in the minds of many is where is it going? That is a question relevant not only for the SLPP but for the people of the entire country.

It is easy to answer where the SLPP is not going. It is certainly not going towards democracy, the rule of law or respect for human rights. That is obvious.

Thus, the Government and the State are in serious conflict. The Government claims, judging by its actions, that it must be free to abandon the State structure in order to be able to govern. The crux of the political situation is in this position, which has within the last year found a much more quintessential expression than ever before.

It would not be fair to say that this Government is the inventor of the idea of the Government liberating itself from the structure of the State. That was the process which unfortunately started from the 1972 Constitution and that came to a climax through the 1978 Constitution, and we have since had almost 40 years of experience in travelling on that path. When the paths diverge, there comes a point at which one path is completely forgotten and all that the traveler would know is the path that the traveler has already taken. Thus, the only path that the Government now knows is to distance itself as much as possible from the structure of the State and to form a Government which is of its own choosing.

And the climax of that is what the many critics point to of a Government that is being entirely controlled by a family. This is not an accident. It is a very logical conclusion of a process where the structure of the State is abandoned in favor of the kind of rule that the ruler or the rulers choose to follow.

Within this, the problem about democracy, the rule of law, and human rights is not that they are violated. Always, even within the best of the State structures, there are violations of institutions and sometimes of individuals who represent such institutions. However, in those circumstances, there are corrective mechanisms through which it is possible to work towards a return to the normative framework within which the machine of the State could run the same way as a train runs on a railway track. It is however very different when the very structure of the State is regarded as irrelevant and even burdensome. The Government as it departs from the path it has to travel within the State structure and its rules constantly finds itself in conflict with the previously existing laws, regulations, and practices. These may be about financial management, corruption, and in terms of the extent to which the State is allowed to use force. All these notions remain valid only to the extent that the normative framework of the State is accepted as the ground that the Government situates itself on.

That is that if the State structure must adjust to whatever the Government would like it to be, then there is no possibility for the State to survive.
This situation is not merely dangerous to the people but it is also dangerous for the Government itself. Once the laws, rules and regulations, and the institutional frameworks are abandoned, it would no longer be under the control of the Government itself to run the way it thinks that things should be run because once horses are let loose, they need not always obey the master anymore. They begin to run in every possible direction and the master may be at a loss even to have any control about whatever he/she wants to control.

Today, in the areas of finance, economic policies, contracts both in terms of business contracts as well as employment and service contracts and every other aspect of life the Government, though it pretends to be under control, is unable to keep itself under control. One very clear example of such a loss of control is the policing system. One time, due to the colonial training and directions, this system was established with great hardship over a period of nearly 150 years.

The strenuous effort that the colonial power put into the development of various aspects of institutions such as the recruitment of persons, the training of persons, the control of internal discipline and the running of the institutions within a framework where on the one hand, the law is protected, and on the other, the citizens rights are safeguarded, was not an easy task.

Scholars have given us great details about how these efforts were taken particularly during the 19th century. Thus Sri Lanka had, not a perfect, but reliable policing institution that could have developed into a position whereby through the proper protection of the law, it could have also protected every aspect of organized life.

However, today, the institution is in a pathetic state. Everybody knows the extent of corruption that is spread and the absence of discipline. Even the basic rules like not keeping women at police stations in the night are being ignored and there are many complaints about the abuse suffered by women and children at police stations.

The entire Magistrate’s Courts system depends upon a proper and faithful functioning of duties by the police. If the police fail to carry out the investigations or produce people on fabricated charges and also as it often happens, torture and sometimes even kill persons in their custody, the Magistrate’s Courts system goes into a very serious crisis. And this crisis is reported by everyone who has to go before the courts and have to face a very saddening experience for which they could find no solution.

Thus, while the United Nations human rights mechanisms and also the local human rights systems such as the national Human Rights Commission and other international agencies and civil society organizations demand respect for human rights and the conduct of investigations into serious abuses such as the large scale commission of enforced disappearances, none of these things could happen under these circumstances.

This should be an eye opener to all those who are really concerned about democracy, human rights and the rule of law and who do not confine these concerns to occasional protests and some criticisms they have from time to time. What they simply cannot any longer ignore is the fact that the system within which they could expect human rights and the rule of law to be respected is no longer in a healthy working condition.

The only factor that makes it also a waste of time in otherwise the worst of the times is the fact that the people of the country seem to be much more aware of the crisis they are in than ever before. People do want a responsible State. Mere change of Government on periodic elections is no solution to the kind of problems the country is faced with now. Much larger issue of reconstruction and development of the State is the only alternative left if democracy, the rule of law and human rights is to be protected in Sri Lanka. That lies more with the thinking people of the country who want a future for themselves than on a Government that wants less of a State and more of its arbitrary power.

Killing the State structure purely for the benefit of a family is the single most important threat that the nation and the family unit are faced with.