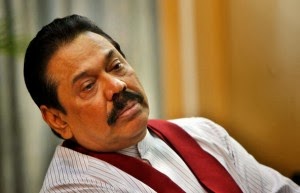 From  The Sunday Times political column
Meanwhile, among the preparations that have got under way for the UNHRC sessions are moves to implement more recommendations of the Lessons Learnt and Reconciliation Commission (LLRC). One such widely publicised measure is to conduct a census on deaths/injuries to persons and property damages due to the “conflict in the past more than 30 years.” It is being carried out jointly by the Ministry of Public Administration and the Department of Census and Statistics. A statement from them said, “it is essential to ensure that while all the families/persons directly or indirectly affected by the conflict are counted, they are not counted twice.”

However, D.C.A. Gunawardena, Director General of the Department of Census and Statistics, said that in respect of families of those who were killed or reported missing during the final stages of the separatist war in May 2009, “evidence forwarded by third parties or relatives will not be accepted. Any information would have to come from the immediate family members.” He said, “We know that Prabhakaran and his family have been killed, but will not include that in the census as none of his family members is here to give the information. We will also call for Death Certificates or Police certificates to establish a death. Even in cases of disappearances, it will be the same.” Gunawardena said that the census now under way would end on December 20 and the final report would be ready in three months. His remarks made clear it will be available ahead of the UNHRC sessions in March next year. The LLRC noted in its report that many persons who made representations impressed upon it that “definitive action against alleged cases of disappearances as well as preventive measures would have a significant impact on the reconciliation process.”

In addition to the well-publicised census, a number of other measures based on recommendations of the LLRC are now on the way. The cabinet of ministers has asked the National Education Commission (NEC) to study and report within two weeks about the setting up of ethnically mixed schools “to encourage greater interaction” between students of different communities. The NEC is tasked to “deliberate on National Education Policy and make recommendations ensuring continuity in all segments of the education system in the context of changing needs of Sri Lanka.” The proposal, based on a recommendation of the LLRC, has been made by Education Minister Bandula Gunawardena. The Commission said “the Government should have a proactive policy to encourage mixed schools serving children from different ethnic and religious backgrounds.”

The NEC has agreed with the Education Minister’s proposal. It has held the view that the Principal and Vice Principal of mixed schools should not be from the same ethnic group. Recommending that two schools in each province be selected on a pilot project basis, the NEC has also said that pupils should be mixed in classes as much as possible, particularly, in English and bi-lingual lessons. During religious and cultural activities the pupils are to be taught to respect the diversity within the school, it has said.

Another significant LLRC recommendation relates to the settlement of land issues. The Commission noted: “Displacement of persons as well as loss of land and homes were major conflict related outcomes, and affected all communities throughout the period. In the last phase, particularly in the Wanni, an estimated 284,000 persons were displaced. Problems concerning land were a key issue that was brought to the Commission’s attention by a large number of persons of all communities who appeared before it; particularly during the Commission’s visit to the affected areas in the North and East. The Commission believes that measures and policies ensuring legitimate land rights, especially among the returning IDPs, would contribute significantly to restoring normalcy and promoting reconciliation.”

A proposal to resolve land issues was made to the Cabinet of ministers by the Lands and Land Development Minister Janaka Bandara Tennekoon. The matter was referred to a detailed study by a Cabinet Sub Committee. Some of the findings that emerged before the Sub Committee:

= There are around 250,000 land issues in the Northern and Eastern Provinces requiring expeditious resolution.
= Officers currently serving in the North and East find it difficult to engage in the task of resolving issues in view of their regular administrative functions.
= There is an acute need for officers with a good knowledge of Tamil to carry out work related to land issues and complete them within a time frame.

Now the ministers are to decide on recruitment of personnel approved by the Department of Management Services. Even retired officers over 67 years of age but agile are to be made eligible for engagement initially for a year. They are to receive an all-inclusive allowance and provided transport for official duties. They are to be told to formulate plans to resolve land issues within two years.

The Government wants to be in a position to highlight at the UNHRC sessions that it was implementing recommendations of the LLRC. Thus, it is to say that some of the issues raised in two successive US-backed resolutions were met or were being met.

Still, a few issues of non-implementation are likely to be raised. British Prime Minister David Cameron issued a strong ultimatum to the Government that if a domestic inquiry over alleged war crimes was not carried out by March, next year, his Government would push for an “international probe.” His Foreign Secretary William Hague also indicated that there may be another resolution against Sri Lanka at the UNHRC in Geneva.

However, in a signed article in last Tuesday’s (November 26) issue of the London based Asianlite newspaper, Premier Cameron has backtracked from his original position. Here are the relevant excerpts: “The end of the civil war in Sri Lanka is a massive opportunity but the issues now need to be grasped. This isn’t about imposing a Westminster view of the world. It’s about standing up for the values that all Commonwealth countries have signed up to. In turn, the rest of the world should recognise political leaders when they get things right.

“So what needs to happen? First of all, there should be a transparent, credible investigation into alleged war crimes. No one wants to go back to the days of the Tamil Tigers, a brutal terrorist organisation. But equally, the Sri Lankan government cannot look the other way. When I met President Rajapaska I pressed for an investigation to take place — and I made clear that if those investigations were not begun properly by next March, we would call for an international inquiry through the United Nations.

“Second, there needs to be greater progress on human rights across the board in Sri Lanka: genuine freedom of expression and a free media, an end to the intimidation of journalists and human rights defenders and action to stamp out torture. Finally, there needs to be a genuine reconciliation between communities. Sri Lanka is a beautiful country with enormous potential in the years ahead. But for too long it has been blighted by conflict. If Sri Lanka takes the opportunity to heal these old wounds then there is the prospect of a much brighter future for all its people.”

Whilst in Colombo, Premier Cameron declared that he would push for an international inquiry into allegations of war crimes “if Sri Lanka does not conclude an independent investigation by March.” He now says “that if those investigations were not begun properly by next March,” he would move for an international probe. Since it is a piece written by him, one cannot say it is a mistake. There is a significant shift. He is now asking the Government of Sri Lanka to start its own probe “properly” by March next year. He had earlier wanted the probe ended by March 2014.

This development comes as a delegation from South Africa, due in Colombo early this month, has indefinitely put off its visit. It was to be headed by Ibrahim Ibrahim, the Deputy Minister of International Relations. As exclusively revealed in the Sunday Times of November 17, South Africa’s President Jacob Zuma proposed to President Mahinda Rajapaksa the setting up of a Truth and Reconciliation Commission to assist in Sri Lanka’s reconciliation process.

He conveyed the same proposal to the Tamil National Alliance during a meeting. Some officials at South Africa’s International Relations Ministry claim the delay had been caused by what is perceived as a “misleading” news release put out by the Presidential Secretariat in Colombo after the Zuma-Rajapaksa talks. However, other sources said it was because Deputy Minister Ibrahim’s diary for the coming weeks was full. Pretoria has also invited a delegation from the TNA to visit South Africa with its own comprehensive proposals in response to the South African offer. South Africa has said that a TNA delegation could even be received in the coming weeks. Soon after the talks with President Zuma, TNA said it would have to respond after consulting India, which it said had assisted throughout in the reconciliation process
ST