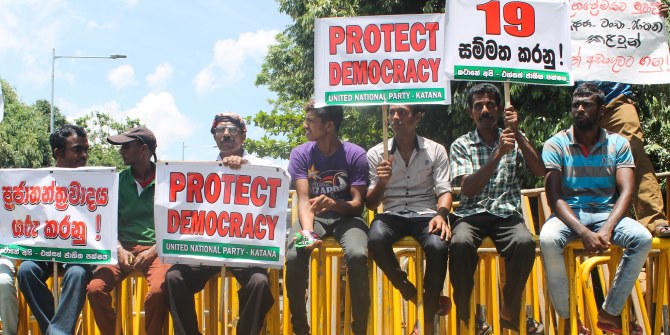 Image: The 19A was thus, achieved by the resilient advocacy of academics, politicians, civil society groups, erudite clergy and many more agitated citizens of the country who were frustrated by the constitutional chaos and abuse of democracy caused by the 18A.

Just before the dawn of the New Year, two constitutional amendment Bills were presented as private member bills by parliamentarian Wijedasa Rajapakshe. These Bills; if enacted, would impact some of the progressive and pro-democratic provisions realised by the 19th amendment (19A) in order to strengthen democratic practice and good governance.

The 19A was materialized as a promise expressed in the election campaign of presidential election 2015, in which the former President severely criticized the ‘autocratic executive presidential system’. With reference to constitutionally changing the executive presidential system, he stated in his election manifesto that “Our inability to achieve that objective was a great failure on our part. It cannot be delayed any longer.” The 19A was thus, achieved by the resilient advocacy of academics, politicians, civil society groups, erudite clergy and many more agitated citizens of the country who were frustrated by the constitutional chaos and abuse of democracy caused by the 18A.

The 18A Bill received widespread criticism from civil society groups and concerned citizens, for the process adopted to enact it into law and for the substance it contained. The Bill was put forward as being “urgent in the national interest”and after the Cabinet certified and approved it, was then referred to the Supreme Court, for its opinion as to whether the amendment required the approval of the People at a Referendum in addition to a 2/3rd majority in Parliament.The Supreme Court determined that a two thirds majority vote in parliament was sufficient to pass the amendment.The main opposition party UNP at that time boycotted the debate on the 18A in parliament and abandoned its legislative duties as the main opposition by failing to raise its voice on a paramount constitutional change that would pose dire consequences on the prevalence of democracy and rule of law. Any meaningful opposition towards the 18A Bill was expressed mainly by the JVP and the TNA. M.A Sumanthiran stressed on Article 154 G (2) and (3) of the constitution, which calls for the referral of a Bill to the provincial councils, when it impacts the powers devolved to the above. By September 8, seven members of parliament had crossed over to the government and seven others had voted in favor of the amendment while remaining in the opposition. Political clientele (allure of ministerial portfolios) and cross overs coupled with the internal instability and inactivity of the main opposition party, had thus contributed to the securing of the required 2/3rd majority by the government.

When an important constitutional amendment is presented as an urgent bill, the normal procedure that involves bringing the bill to the notice of the public is discontinued and the opportunity for public discourse is lost.The call for the abolition of the executive presidency post the 1978 constitution had been strong within the public who were aggrieved by the anti-democratic excesses of the JR Jayawardena regime. Since 1994, Successive presidential candidates have been making promises to reduce presidential powers in attempts to gain power. The hasty process adopted to bring about significant constitutional change, and failing to provide for public discourse and debate, reveal an appalling disregard for vital, internationally practised customs of constitution making. While the hasty procedure used to enact the 18A was outrageous, what was more shocking were its provisions and substance. The presidential term limit (imposed in all civilized democracies) is absolutely essential for a functional democracy which will prevent autocratic rule, reduce corruption, and facilitate increased public accountability. The 18A by doing away with the two-term limit on presidency, and allowing the incumbent to be elected repeatedly, paved the way for authoritarianism. The presidential immunity clause (Article 35 of the constitution) coupled with the removal of presidential term limit was a recipe for authoritarian and despotic rule. The amendment also did away with the constitutional Council which was a substantial check on the powers of the executive. The constitutional council which exercised a powerful check on possible abuse of power by the executive when appointing members to independent commissions, was replaced by a weaker parliamentary council which could only offer its observations in relation to above appointments. The President could also at his sole discretion appoint the Attorney General, the judges of the Supreme Court and the Judges of the Court of Appeal, which severely undermined the independence of the judiciary. Under the amendment, the President was also vested with unfettered powers to appoint members to the public service commission and the cabinet was vested with powers to determine all mattes of policy relating to public officers thus undermining the independence of the commission. Powers of other key institutions such as the Elections Commission and the national police commission were also substantially restricted. The significant consolidation of power in the executive was a strong blow to the first principles of democracy and constitution practice and resulted in the subversion of the rule of Law in the country.

It is no surprise then that the executive, strengthened by the most outrageous constitutional amendment of the country’s history, demonstrated authoritarian excesses.The anti-democratic practices that were carried out strengthened by the  provisions of the 18A such as dynastic politics, violation of the independence of the judiciary, corruption, and repression of the freedom of press and media personnel, contributed to the incumbent being viewed in a negative light by the general public. It was this unpopularity that contributed to the election of a lesser known politician as Maithripala Sirisena, in place of the incumbent who had during the previous election,easily amassed a majority vote with large numbers in districts with predominantly Sinhalese population.The citizens of Sri Lanka, irrespective of ethnic differences and aspirations,agitated for a regime change and for the repealing of the 18A and the enactment of the 19A to rectify the consolidation of powers in the President with aims of strengthening democracy and good governance. The 19A significantly reduced the unrestricted powers of the President, and imposed strong checks on the executive. The two term presidential limit was reintroduced,presidential term of office was shortened to five years and the powers of the President in terms of making appointments to key public office were significantly curbed. The independent commissions were re-established and a constitutional council was established to make recommendations with regards to the appointment of members and chairmen. The above progressive provisions were included to facilitate better observation of the separation of powers and the strengthening of good governance.

The 21st and 22nd Amendment Bills contain provisions that attempt to reverse the pro-democratic flow that was achieved by the 19A. The 22A aims at re-strengthening the powers of the executive president which will pose a threat to the democratic process and will undermine the rule of law and the observation of the separation of powers. According to the present constitution, the Chief Justice and the Judges of the Supreme Court, the President and the Judges of the Court of Appeal and the members of the Judicial Service Commission can be appointed by the President only after the nominees have been approved by the constitutional council. The President according to the 22A Bill, can make above appointments simply by ascertaining the views of the Judicial service Commission. With respect to other key public service appointments such as the Attorney-General, the Auditor-General, the Inspector-General of Police, the Ombudsman and the Secretary-General of Parliament,which are also made only after the President’s nominees have been approved by the constitutional council, the bill allows the President to make appointments by ascertaining the views of the Prime Minister. The President once again will be strengthened with unfettered powers to make appointments to the above posts which are key judicial and public service positions in a democracy.

This will repeal an important check on the executive and will mark a slow but steady shift towards the regressive policies of the 18A. The 21A aims to increase the percentage of votes required to select a candidate from an electoral district, from 5% to 12.5% of the total votes. The implications of this amendment will be to drastically limit representation of minority parties in parliament, and thereby undermine the ability of minority parties to influence government policy. As Sir W. Arthur Lewis elucidates on the concept of democracy, “Its primary meaning is that all who are affected by a decision should have the chance to participate in making that decision, either directly or through chosen representatives.”(1965) Creating opportunity for minority representation does not amount to creating opportunity for manipulation of major parties by the minor parties.

On the contrary it facilitates the democratic process by allowing minorities to impact the decisions that affect them. It is then the responsibility of the opposition to fulfill its legislative duty by highlighting the above provisions during the parliamentary debate in order to prevent a return towards the regressive policies of the 18th amendment and to uphold the separation of powers and the rule of law of the country.