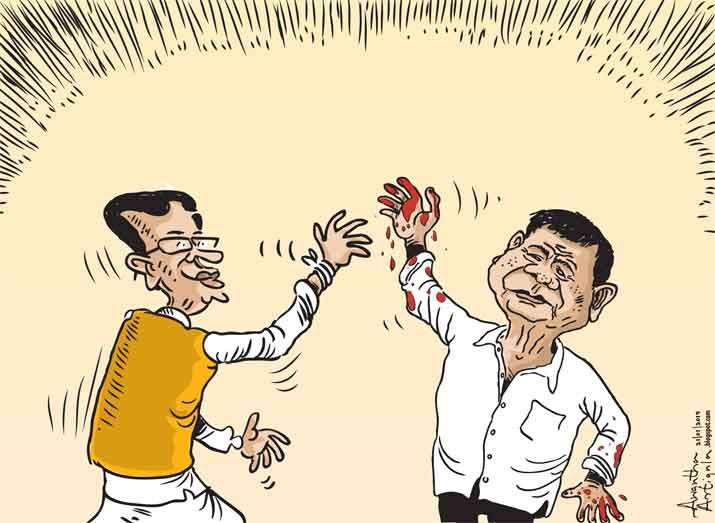 Speaking at the parliament on 06th Feb. President Sirisena criticised the independent Human Rights Council of Sri Lanka and Constitutional Council. Further he indirectly threatened the human rights organitions not to critise his decision to implement death penalty.

“I request Human Rights Organizations not to object to the move to implement the death penalty as it is done to control the drug menace and underworld activities in Sri Lanka. The country is now proliferated with various drugs including marijuana, cocaine, heroin and Ice. Come what may I would put into practice the decision I took to implement the death penalty within next two-three months” he has insisted.

The death penalty will be implemented within another two-three months despite objections, he has further said.

The Human Rights Commission of Sri Lanka (HRCSL) questioning the deployment of STF at the Angunakolapelessa Prison came under criticism of President  Sirisena in the same speech.

The President expressed his dismay that the HRCSL Chief had sent a series of questions.

“We transferred serious criminals to Angunakolapelessa and deployed the Special Task Force to ensure security. The HRCSL Chief had asked as to why and under whose instructions it was done. It has sent a lengthy question paper. The STF renders a yeoman service. It should be praised. That is why I gave a service extension to its Commandant and it was unanimously approved at the Cabinet. I call on the human rights groups not to hinder me when I try to build this nation and ensure that our future generations would be saved from the drug menace,” the President said.

The President also criticised the HRCSL over its calls for thoroughly screening military personnel before sending to the UN Peacekeeping mission as well as for various foreign training, adding that this had led to an unnecessary delay.

He even blamed the HRCSL for death of  two Sri Lankan Army personnel who were recently killed while engaged in the peacekeeping operation in Mali. according to Sirisena they would not have suffered that fate had not the HRCSL delayed the process.

“Those two soldiers were due to return to the country six months ago. The vexing of the HRCSL delayed the deployment of new batch,”  he has said.

Sirisena expressed his dissatisfaction over the Constitutional Council (CC) for not informing him reasons for turning down 12 names suggested by him to be appointed as judges.

It would be a tragedy if the judges are not given promotions on the basis of judgements they had given in the past. If anyone is not qualified then that should be conveyed to me and the Chief Justice. Those who get their names rejected think that I did it.

This is a matter that should be cleared,” Sirisena further said.

President Sirisena also questioned about the availability of regulations and guidelines for the Constitutional Council to follow when assessing the skills and abilities of persons if they are not assessed on their seniority.

With the inputs from Daily News.