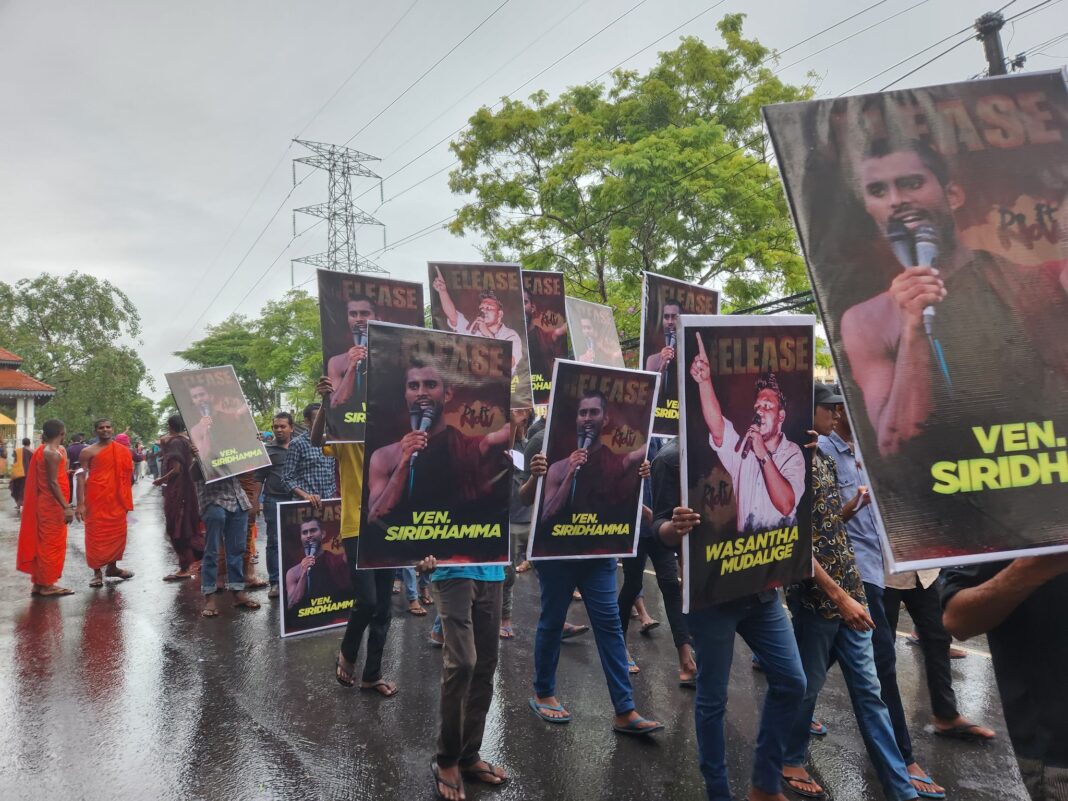 As the Inter-University Students’ Federation (IUSF) activists’ planned march towards Colombo from near the University of Kelaniya – against President Ranil Wickremesinghe, the Government, and the Government’s programme of suppressing the “aragalaya” – was blocked by a large group of police officers on the Colombo-Kandy Main Road yesterday (18), the IUSF instead staged the protest in front of the University of Kelaniya.

The IUSF had organised a protest yesterday to make several demands, including the release of all activists arrested for engaging in the “aragalaya”, including the IUSF Convenor Wasantha Mudalige and Inter-University Bhikkhu’ Federation (IUBF) Convenor Ven. Galwewa Siridhamma Thera, both of whom are currently being detained by the Criminal Investigations Department (CID) under the Prevention of Terrorism (Temporary Provisions) Act (PTA).

Organised to commemorate the completion of two months since the detention of Mudalige and Ven. Siridhamma Thera, the protest started at around 12 noon yesterday near the University of Kelaniya. It was seen that more than 500 police officers had been deployed around the area where the protest started with the participation of a large number of university students and activists of the “aragalaya”.

The IUSF had planned to proceed towards Colombo from the Kelaniya University, but were unable to do so, as a large number of police officers had been deployed, completely blocking the Colombo-Kandy Main Road. The officers on the road faced strong opposition from the protestors, who accused them of blocking the road in such a way that vehicles could not use the road.

Meanwhile, an officer announced via loudspeaker that the protestors had violated the provisions of the National Thoroughfares Act, No. 40 of 2008 by engaging in a protest blocking the Colombo-Kandy Main Road. Therefore, the Police announced, the protestors were required to act in a manner that did not block the movement of vehicles and people using the road, and that if the protestors failed to do so, the Police would act to disperse the protest under the relevant sections of the Criminal Procedure Code.

Meanwhile, video footage of the incident showed several water-cannon vehicles arriving at the scene, and some police officers taking away two persons, who are believed to be university students and a Buddhist monk. One student who was being taken away by the police officers was seen saying: “Please let me go, I am a first-year student. I didn’t do anything wrong. So let me go.”

The protestors continued to chant slogans on the Colombo-Kandy Main Road and protested against the Government and President Wickremesinghe. They alleged that the Government led by Wickremesinghe has been continuously misusing the provisions of the PTA and repressing activists involved in the “aragalaya”. They also claimed that police officers are cracking down on the activists at the behest of the President and the Government in expectation of promotions and other perks.

The protestors chanted slogans such as: “repeal repressive laws including the PTA immediately”, “let’s get rid of the Wickremesinghe-Rajapaksa (a reference to former President Gotabaya Rajapaksa) ‘junta’ and fight for the people’s rights”, “stop abductions and imprisonments immediately – release activists”, and “let us live – lower the tax burden”. However, they were not allowed to move towards Colombo as the police prevented them from marching onwards.

The IUSF activists then staged the protest at Sarasavi Mawatha, which runs from the Colombo-Kandy Main Road to the Kelaniya University. At that time, police officers, who approached the University students on Sarasavi Mawatha and saw strong opposition from protestors, were observed standing along the centre line of the Main Road. Later, vehicular flow, which had been disrupted for several hours, was restored to some extent.

In a Twitter message, the UN Special Rapporteur on the Freedom of Expression stated: “Ahead of the protests planned by the IUSF, I urge the Sri Lankan authorities to respect the right of assembly. Law enforcement has an obligation to protect protestors and must create a safe enabling environment for all to express their views. I will be following the situation closely.”

A Twitter message issued by the UN Special Rapporteur on Human Rights Defenders read: “I will be following student-led demonstrations in Sri Lanka. Observers, protest organisers, and other human rights defenders must be allowed to carry out their peaceful assembly without retaliation.”

The IUSF had organised a massive protest in Colombo on 18 August against President Wickremesinghe and the Government. A total of 16 university students who were arrested during that protest were released on bail after being produced before the Colombo Magistrate’s Court on 19 August, while IUSF Convenor Mudalige, Ven. Siridhamma Thera, and IUSF member Hashan Jeewantha were placed under detention by the CID.

Jeewantha was later released on bail after being produced before the relevant magistrate; however, Mudalige and Ven. Siridhamma Thera are still being interrogated by the CID on a 90-day detention order signed by Wickremesinghe in his capacity as the Minister of Defence.

The PTA is a law in Sri Lanka that gives the Police broad powers to search, arrest, and detain suspects. It was first enacted as a temporary law in 1979 under the J. R. Jayewardene Presidency, and then made permanent in 1982. Under the PTA, a person can be detained for periods of up to 18 months (renewable by order every three months) if the Defence Minister has reason to believe or suspect that any person is connected with or concerned in any unlawful activity.

With the detention of several activists of the people’s struggle which demanded the resignation of former President Gotabaya Rajapaksa under the PTA, many parties including the Opposition’s Samagi Jana Balawegaya have been insisting that the Government repeal the PTA, a demand that has been made by several parties including the Tamil National Alliance (TNA) and the Sri Lanka Muslim Congress for a considerable time.