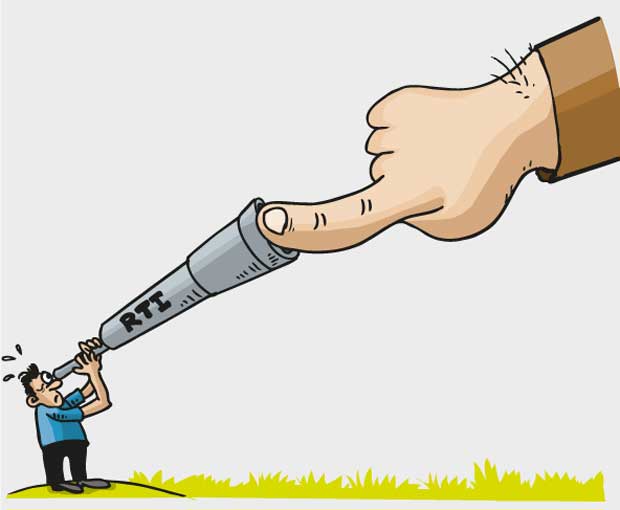 The Right to Information that has been much hyped by the leaders of the Yahapalanaya government in the recent past seems to be one of the main issues not or less understood by the same leaders and the officials under them. Some bigwigs arrogantly scorn at and ridicule the media men in public when the latter question them about important matters involving public interest. They justify the recent assault on a journalist by the Navy Commander citing ethical and legal grounds. Now the Inspector General of Police (IGP) Pujith Jayasundera has imposed some sort of ban on the private media.

The police had announced that the police news would not be sent daily to private media institutions through emails with effect from December 21. The Police Chief had also instructed his officers not to invite private media representatives to any function held at the Police Headquarters in the future. The decision has ludicrously taken after the uproar in the country that followed a telephone conversation between the IGP and a “sir” during a recent public meeting in Ratnapura. The conversation with visual was telecast on a private media channel raising many questions on government’s much hyped anti-corruption drive and the independence of the police.

To explain the Police Chief’s decision through an example involving the police themselves, it amounts to a gambler scolding a policeman for arresting him. In his opinion it was the media which caught him on camera answering a telephone call before a microphone in an apparently submissive tone that had faulted. It is unfortunate that he cannot realize that it was his action and not that of the media that created the controversy over the manner in which “good governance” is
at work.

Firstly, one should not answer telephone calls before a microphone as it might involve personal matters of the person at the other end or others and create ethical issues. Besides, it is an insult to the audience behind the microphone. Secondly, as an independent officer he should not have given assurances to anybody that somebody would be or would not be arrested. What media reported was just the fact that involved public interest.

Besides, showing the true face of Yahapalanaya, the controversy is almost swept under the carpet now. The statements made by leaders that the matter would be investigated seem to have gone into thin air. It is the IGP who now seems to want to rejuvenate it by imposing a ban on private media, which is, in a way, good.

The Police Chief has no right to deprive the people of their right to information which is implemented by both the state as well as the private media. Even National Police Commission (NPC) Secretary Ariyadasa Cooray had told that police should provide news to private media institutions when the Right to Information (RTI) Act was in force.

The country must know whether the IGP’s decision to officially dissociate the private media has been sanctioned by the political leadership of the country. The leaders of the government including those who scorn at the media men in public must remember that they would not have come to power had there not been the private media during the last Presidential election. For instance, it must be remembered that it was the private media that exposed the attack on them by the provincial leaders of the last regime at the Mattala airport. It must also be remembered that the journalists covered that incident without permission as they did during the recent Hambantota Port strike. They wanted to bring in a Right to Information Act then keeping in mind especially the private media and not the state media or the general public, as they professed.

Now the pendulum seems to have turned. It is time for the UNP which was advocating media rights when it was in the Opposition to talk about media ethics and find fault with media and for the UPFA led by the leaders of the former regime who had hitherto been accused of suppression of media to be champions of media freedom. However, media would brave all the odds including bans so long as the masses are thirsty for information.