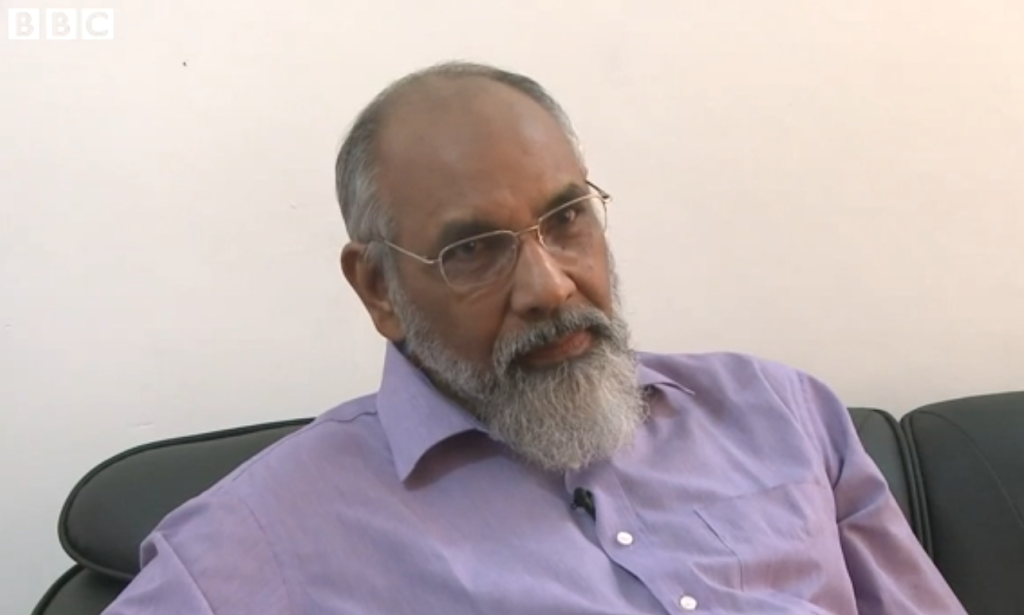 The Chief Minister of the Northern Province C V Wigneswaran today slammed the Government and President Mahinda Rajapaksa, saying they are showing no interest is solving the National issue.
Wigneswaran said that there seems to be no attempts made by the Executive to work towards a lasting political solution except to blame the TNA for not coming forward to participate in the Parliamentary Select Committee process.
Speaking at the Bernard Soysa Centenary Commemoration meeting in Colombo this evening, Wigneswaran said the only interest of the Government is in a unilateral solution facilitated by the military and the “extra quick forcible colonisation” of areas with people from the South with the help of the Army in Vavuniya,  Mullaitivu and Mannar areas is a step in that direction.
“I was given copies of Notices pasted in many parts of the South calling for Sinhalese to apply for lands in the Vanni to be given free of charge. In fact my friends in Vavuniya know the identities of some who have managed to get such free land. So the lasting political solution mentioned by the President seems to mean one brought about by cannibalisation of the Northern and Eastern Provinces,” he added.
Wigneswaran also said that the Government seems keen to blame the TNA for not coming forward to participate in the Parliamentary Select Committee process.
“Not to lay down in advance the basics of the Parliamentary Select Committee deliberations would lead the Committee towards the same abortive end the earlier deliberations faced. If we lay down on the table the Reports and Recommendations of various Committees which had gone into these matters earlier, especially those during the time of Madame Chandrika Bandaranaike as well as those during the stewardship of the present President and instruct the Parliamentary Select Committee to take forward their deliberations from where the earlier Committees have left, I see no reason for the TNA to keep out of the Parliamentary Select Committee deliberations,” Wigneswaran said.
He also refuted claims that the LTTE is regrouping in the North adding that the claim is now being used for a “witch hunt” for political reasons. Wigneswaran said that even the newly appointed army Commander in the North is being forced to peddle the Tiger regrouping story.
“People in large numbers are now being taken into custody consequent to an unfortunate witch hunting which was started for political reasons. No one believes that there is any such Tiger re grouping. What is worse is that the people oriented useful steps that were taken by the energetic Commander of the Northern Province since he took over recently, have now come to naught. Under the pretext of making out that the Tigers have started regrouping in the North of Sri Lanka at a time when our case was before the Human Rights’ Council in Geneva, we have begun to re-enact what was done earlier to our people to bring them under the draconian Prevention of Terrorism Act,” he said. (Colombo Gazette)
CG
Share
Facebook
Twitter
WhatsApp
Pinterest
Email