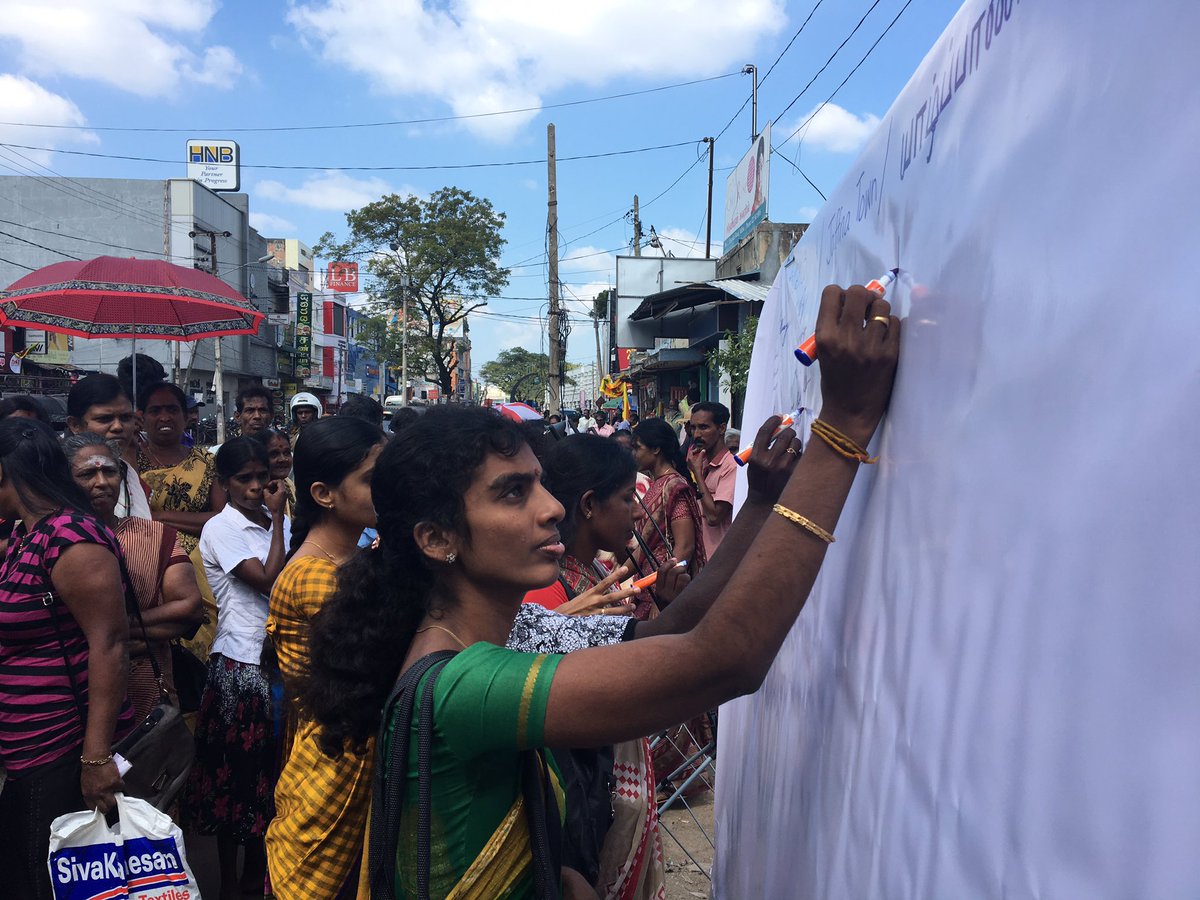 We, a collective of Sri Lankan individuals and organisations working for the advancement of the human rights of women, are unanimous in our concern about the disturbing news that certain provisions in the National Human Rights Action Plan, critical to women’s rights and gender equality, are at risk of being dropped.

Reports in the mainstream media referred to calls from a few members of the Cabinet to drop selected clauses in the Women’s Rights chapter which recommend the repeal of discriminatory legislation. Repealing discriminatory laws is imperative to ensuring that all Sri Lankan citizens are guaranteed their full human rights, regardless of sexual orientation and gender identity, the work they choose to engage in, or in relation to the exercise of the right to freedom of movement.

Changes to the Economic, Social and Cultural Rights chapter have also been reported [1]; this is especially alarming, as it seems the objections raised are in relation a clause to ensure that all persons have free and fair access to public healthcare, a basic human right, regardless of their chosen line of work, sexual orientation and gender identity.

The chapter on Women’s Rights was clear in its request that all discriminatory practices and legislation must be abandoned, with explicit mention that all individuals should be guaranteed equality, regardless of sexual orientation and gender identity, and chosen line of work. Women’s organizations’ submissions to the Public Representations Committee on constitutional reform also stressed the importance of addressing the history and reality of systemic marginalisation faced by women (including sex-workers) and persons of diverse sexual orientations and gender identities in Sri Lanka, despite the equality clause in the present constitution. Many of these concerns were echoed in the report of the PRC, published last year.

Clear and wilful affirmative action must therefore be taken by the State to end discrimination, in practice as well as legislation. The State has a responsibility to deliver on its commitment to grant all citizens equality and dignity.

The National Human Rights Action Plan was drafted collaboratively by members of government and civil society. Unfortunately, though wider public consultation was sought prior to drafting the NHRAP, a finalised draft was not circulated for wider comment. However, the drafting benefited from the expertise and experience of the government and non-governmental sectors. The drafting process, and the plan which resulted from it, can be seen as a culmination of efforts to realise a truly equal, just and united Sri Lanka, where all persons can be empowered and valued.

We therefore call on the President, Prime Minister and/or any member of cabinet to consult directly with representatives of the affected groups without unilaterally contravening that process. We urge you to increase transparency around the current process, and seek collaboration, so that the National Human Rights Action Plan the government finally adopts will be fair and democratic.

We are furthermore dismayed at the statement made by the Minister of Justice naming homosexuality as a mental illness. It is unfortunate that a person with education and experience, holding such a high office, and the power to influence many, made such an erroneous statement, publicly. Homosexuality was declassified by psychologists in 1973 and the World Health Organization removed references to homosexuality as a mental disorder in 1990.

The Vagrant’s Ordinance is used to harass, arrest and detain sex-workers, and is also used to criminalize the poor, mentally ill, disabled and other vulnerable persons. Articles 365 and 365A of the Penal Code, which are widely considered to criminalise homosexuality, are used to arrest, detain, harass, intimidate, blackmail and shame persons of diverse sexual orientations and gender identities.

As long as outdated colonial laws such as these exist, countless women (and others) across Sri Lanka are forced to live a life of fear, abuse, rejection and discrimination, at the hands of state actors, communities and families. In addition to being vulnerable to violence and harassment, these laws create negative social attitudes towards specific groups of people, and contribute to a regressive culture.

We acknowledge that initial steps have been taken to begin the eradication of discriminatory practices within state institutions such as the police, as well as in the private and public health sectors, through training and sensitization efforts. This is valued. We urge the state to maintain a strong and consistent effort to continue this important work.

Finally, the repeal of discriminatory laws and the guarantee of equal rights for all human beings is essential to the realisation of a full and lasting peace, and to the building of a sustainable, meaningful democracy. We call on the President and the Cabinet of Ministers to ensure the adoption of a National Human Rights Action Plan which protects, respects, promotes and fulfils the human rights of everyone.