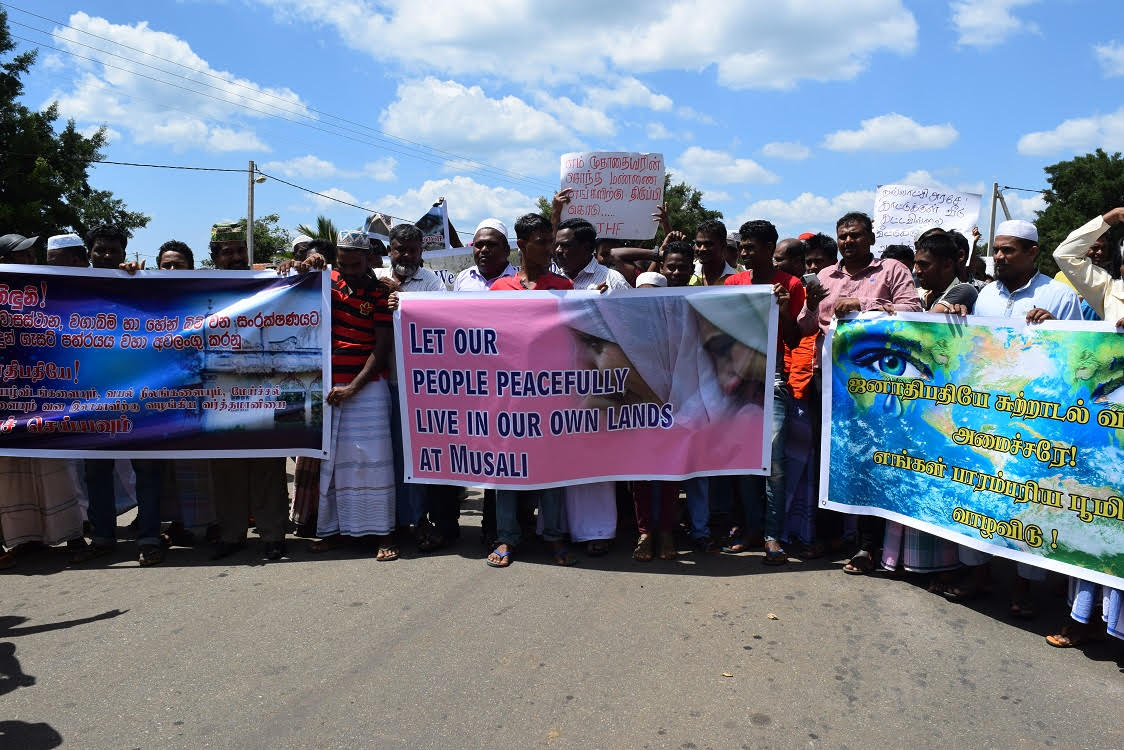 The people of the North and East came to the street protesting and urging the release of their lands that were taken by the military.

Their daring protests have been ‘heard’ and several lands occupied by the security forces are being released gradually paving the way for Tamils to resettle. However, in the Mannar District there lies confusion over the releasing of lands to the people, especially in the Wilpattu border and the voice of the protesters seems to have fallen on deaf ears.

The Muslims, who agitated over the government’s step-motherly treatment regarding the resettlement programme, are now protesting over the Gazette Notification on 24 March 2017 declaring four forest areas north of the Wilpattu sanctuary as reserves, thereby preventing Muslim Internally Displaced Persons (IDPs) from returning to their homes in Mannar. Their protest is not as vociferous when compared to the protests in the North.

The 28-kilometre stretch of land starting from the border of Wilpattu, Upparu to Silabaththurai Town (Musali Division) is the area that is in question but the authorities and environmentalists say they are not targeting the original villages but the outskirts that have been encroached. The Muslims are urging the government to allow them to get back to their lands.

President Sirisena’s decision to sign the controversial Gazette on Wilpattu in haste, supposedly inked at the Sri Lankan Embassy in Moscow during his recent tour there, brought unpleasantness among Muslims who felt they have been betrayed on racial borders.

Mannar MP and Minister of Trade and Commerce, Rishad Bathiudeen, and a one-time close confidant of the Rajapaksas crossed over to the present government due to shoddy treatment he claimed the Rajapaksas had on his community, especially for not probing the Aluthgama violence, and today he is again fighting tooth and nail with this government on behalf of his people.

The Muslims fled the villages in Mannar in the 90s and found refuge in Puttalam, Anuradhapura and in many other parts of the island. But when they returned in 2009 once the war ended, the areas where they lived earlier had turned into a forest. Also, the issue was the population that left the area returned in three folds after 22 years.

It was their MP Bathiudeen who then attempted to clear the land for them with the help of the then Minister of Economic Development Basil Rajapaksa who permitted the ‘de-foresting’ of the areas where the people had lived.

Basil Rajapaksa told Ceylon Today at that time that the Forest Department followed the demarcation using the Google satellite image.

When the writer confronted Minister Rajapaksa then, he said the lands belonged to the Muslims and there is no point in dragging them to the Courts while they were suffering from poverty. ‘I know that these are places where they lived for many years and asking them to get permission from the GS and the AG to fell the overgrown trees in their gardens sounded silly’ and he admitted that with the STF support he helped clear those lands.

However, the ‘deforestation’ drew much attention and environmentalists claimed that this land was part of the Wilpattu National Park adding that the move was politically motivated. The entire issue continued till the current government declared the adjoining villages of Wilpattu as a forest area.

The respondents submitted further that the petitioner by making reference to the same is taking advantage of the extensive media coverage of alleged forest clearing in Wilpattu in the last one year or so, aimed at distorting a lawful resettlement activity into an illicit and wanton destruction of a national treasure. The Muslims denied destruction of valuable forests and stated further that all the clearing activity was done with proper sanctions.

The petitioners, including Sajeewa Chamikara of the Movement of Land and Agricultural Reform and Centre of Environmental Justice claimed that the people of Mannar had encroached on the forest reserve and that MP Bathiudeen was claiming otherwise.

“We are not talking about the five demarcated Grama Niladhari Divisions that are Marichchikaddy, Karadikuli, Mavillu, Veppal and Vilathikulam. It is the outskirts of these villages that are being cleared for encroachment,” Chamikara told Ceylon Today. He said another 4,000 acres that were deforested was actually a part of the forest land.

He said that MP Bathiudeen is diverting the attention by claiming that the villages were earlier occupied by his voters and including the other lands.

The government has already distributed about 600 acres of land to the Muslims giving half an acre for each IDP family. According to Chamikara, even those lands are part of the forest and that the government should declare them as forest land at the very earliest.

He added that in 1940 these areas were forest reserves including the coastal belt and the Villu Wetland. The same was declared later in 2012, he noted.

“Our main concern is the 4,000 acres of land situated in the outskirts of the Muslim villages that have been deforested and encroached, and this is what MP Bathiudeen does not want to accept.”

The government’s approach to resettle all the war victims is in fact gradually taking place but with the Mannar IDPs it is a different issue. Several members of the International Community that visited Sri Lanka have stressed that there is much to be done in addressing the country’s long-term peace process adding that the Mannar IDPs also need serious attention.

Forest Conservation Department Manager of Environment Division, Mahinda Seneviratne, speaking to Ceylon Today said the government has not grabbed the land of the IDPs. He added that the Gazette notification demarcated the forest reserves and the lands belonging to the people.
We have only declared the State land between the Wilpattu border and Silabaththurai area (Musali Division). If there are persons with proper deeds they can still approach us and we will release the lands they are legally entitled to.
On 26 April 2017 Seneviratne will be meeting IDPs of Mannar.

Attorney Habeeb Rushdie based in Colombo claims there are many issues related to all these claims.

He says around 3,000 acres are occupied by the military and if that is released some of the issues could be solved. It is ridiculous when private lands are occupied and the government goes about claiming other lands as forest land. He pointed out one person has 17 acres of land inside the Mullikulam Military Camp and that is more than enough for him and his generation to return.

He claims that on examining the deeds and documents of some IDPs, there are people who have lands inside the areas which the government has declared to be Forest Land.

Lawyer Rushdie who has been listening to the pleas of the Mannar people has helped to frame complaints that have been forwarded to the Human Rights Commissioner.

“What the people are urging is to de-gazette the notification that was endorsed last month by the President and study the matter further.

Rushdie said people from eight areas of the Musali Division have been chased out and government has not spoken a word on the security forces occupying private lands in Mannar.

The protesters in Musali have received the assistance from a group of Law College Muslim Majilis (student body) that visited the area recently. They have helped the IDPs file complaints to the HRC.

According to them nearly 30,000 original settlers are there, out of which nearly 600 families have received half an acre of alternative land by the government.