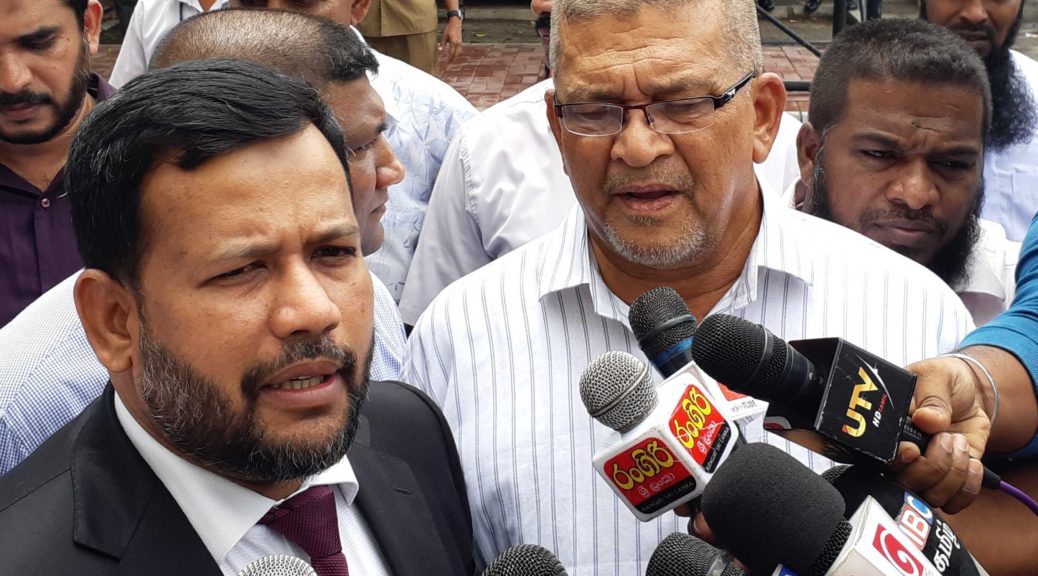 They will shortly be meeting the United Nations (UN) Resident Representative in Sri Lanka and also the powerful Organisation of Islamic Cooperation (OIC)–world’s second largest inter-governmental organization after the UN.

“We decided to take several collective actions in the next few days…To meet  members of diplomatic community in Sri Lanka, to meet the UN Resident Representative in Sri Lanka, and we will even go and meet Organisation of Islamic Cooperation (OIC)–world’s second largest inter-governmental organization after the UN” said the Leader of ACMC Rishad Bathiudeen MP on 7 June in Colombo. Bathiudeen MP, accompanied by MPs and members of All Ceylon Muslim Congress, was addressing the press on 7 June after he visited the Police HQ in Colombo to lodge his complaints with the IGP.

The Organisation of Islamic Cooperation is the collective voice of the Muslim world. OIC has membership of 57 countries in four continents and safeguards to protect the interests of Muslims across the world.

“Hon MP Wimal Weerawansa has been irresponsibly and falsely accusing me and is creating an inter-ethnic issue by his actions. His conspiratorial accusations are divisive and creating ethnic hatred by their very nature” said Bathiudeen MP, and added: “Today I complained to the IGP against this, calling for an immediate inquiry and legal action by Police. We do not have any dealings with terrorist Zahran. I never met Zahran nor seen him either. Therefore MP Weerawansa’s allegations that Zahran used vehicles belonging to SATHOSA that was under me, for his terrorist activities, is totally false. It is also irresponsible. Also SB Dissanayake MP is exacting political revenge from me now since I did not extend my support to them during the 52-day anti-democratic coup in October 2018. Today we also filed a complaint against Dissanayake MP for the false accusations he is making against me and his malicious propaganda. WE Muslim MPs always cohabited with all other ethnic groups of Sri Lanka and we never supported ISIS or any form of terrorism. Therefore statements by Weerawansa and Dissanayake MPs are creating a new rift in our country where Muslims were attacked in places like Minuwangoda and Kuliyapitiya by some other terrorists. It was Dissanayake and Weerawansa MPs who were behind such terrorist acts. Muslim religious leaders, political leaders and Muslims in areas such as Sainthamarudu extended their fullest support to wipe out terrorists as well. We are also of the firm belief that ISIS terrorism should be wiped out from Sri Lanka. At a time we are trying to voice this consensus and helping to eradicate terrorists, it is very sad that such allegations are levelled at us by these MPs, and therefore we have filed our complaint today. Muslim Ministers did not step down just because these MPs nor the opposition asked us to resign, but out of our concern for the country. We respect the call by Most Ven Mahanayake’s to former Muslim Ministers to re-join the government portfolios and see it as a good slap for any extremist and terrorist groups here. We the resigned Ministers and Muslim leaders met yesterday  and decided to take several collective actions in the next few days-To meet Most Ven Mahanayaka’s, to meet the Opposition Leader Mahinda Rajapaksa, Leaders of Political Parties including the JVP and TNA and other leaders –Mano Ganeshan, Radhakrishnan, Digambaram, all diplomatic members in Sri Lanka, UN Resident Representative in Sri Lanka, and we will even go and meet Organisation of Islamic Cooperation (OIC) –world’s second largest inter-governmental organization after the UN.”

Earlier on June 3, the top rung of ACMC, stepping in to the fray for the first time and coming to the forefront for the first time announced at a media conference that Sri Lanka’s political opposition was making false allegations in the No Confidence Motion (which now stands void) against ACMC Leader Bathiudeen on an anti-ACMC motive. They also cautioned the Opposition Leader Mahinda Rajapaksa that some MPs around him have been creating communal hatred and said that “he should exercise care.”