Sri Lanka: Mega development of Rajapksha birth place is not only waste but also arrogance of power 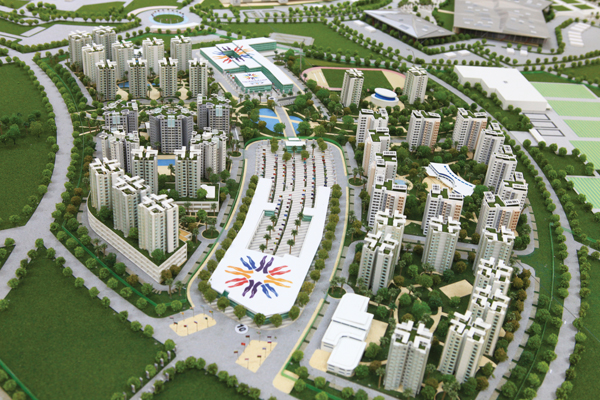 Hambantota: A capital in waiting in Sri Lanka?
by A Special correspondent / Sri Lanka Gaurdian
This article is written objectively in the national interest of Sri Lanka. I do not endorse any regionalism or village-mania at all. All regions in Sri Lanka should be equally developed and equally treated with fair development projects and programmes. That is the true expression of national patriotism. Developing one region at the expense of other regions is not the true expression of national patriotism rather such attitudes and mindsets are pure expression of regionalism.

When politicians with excessive executive powers engage in such activities of regionalism that would deprive all other regions and what exactly happening in Sri Lanka is President and His Brothers are keen to develop their place of birth than any other part of the country. All recent development programmes are mostly concentrated in this district of Hambantota. Why is this favouritism to this district? Is it this President and his family hail from a remote village in this part Island? Consider for example how many mega projects have been constructed in Hambantota alone in recent time.

Hambantota Harbour, Mattala Air port, International Convention Centre, Newly built Cricket ground, a number of hotels complexes and many more projects are constructed recently in this distinct alone. All these mega projects are constructed as if Hambantota is the new capital of Sri Lanka. As if millions of Sri Lankans live in this remote part of Sri Lanka. I would argue that money barrowed with high interest rates for these projects would unquestionably put Sri Lanka into unimaginable economic crises. If these projects are not successful it would be an economic suicidal for Sri Lanka. It is not MR and his Brothers who are going to repay loans borrowed for these projects rather it is Sri Lankan public bear the burden of repaying all loans with high interests.

I wonder why opposition parties cannot object these political blunders. These are not mere mistakes rather these are deliberately and intentionally done political incorrectness. These are mere abuse of political powers and these are mere politics of arrogance. Even a child with a Credit in Economics would know the economic consequences of these unviable and unsustainable projects. It is true that Anura Dissanayake of JVP did try to expose some of these political blunders. I think that it is moral duty of politicians to expose all these political mistakes of this government.

It is a natural instinct that everyone loves their place of birth. Yet, Sri Lankan President MR has got special love and attachment to his birth place at the expense of billion rupees of public money. He has taken every step to make his birth place a future capital of Sri Lanka. Why on earth this remote district of Sri Lanka gets a special provision? Why most of developments of projects are done in this remote district of Sri Lanka at the expense of all other districts? Look how mega development projects have been constructed at this district alone in with last 9 years of MR presidency? This is done at the expense of billions of public money in Sri Lanka? Some of these developments are done with loans borrowed in high interest rates. Who is going to pay back all these loans? It is the hardworking people of this country will bear brunt of these long term loans?

It is well known fact that Hambantota is one of less populated districts in SL. It is situated geographically in a remote part of Sri Lanka and most of parts of geographical landscape of this district is forest and only suitable for agriculture and wildlife. Changing the landscape of this district would be an ecological and environmental disaster for Sri Lanka in long terms and yet, with the political powers MR and Brothers ventured into these mega developments without any second thought on ecological and economic consequences of these projects. No doubt like all other countries Sri Lanka needs some mega development projects and yet, these should be sustainable developments projects. These developments projects should be done in appreciate time and appropriate regions with professional advice of all stakeholders. Public should have been consulted in all these projects and properly these issues should have been debated in the parliament as well.

A cursory look at some of recent mega development projects in his birth place would reveal some shocking statistics. Recently, an artificial port was developed in Hambantota at the expense of billions and yet, what return Sri Lanka expects from this port? What are the economic benefits of such port? It is reported even some international shipping companies do not want to come near to this Harbour for fear of ship wreckage? What a waste of public money is this? What an economic disaster is this? Who take responsibility for this political blunder? If this disaster is not enough then comes Air port project. Mattala Air port is one more political blunder of MR and co.

Sri Lanka is a small island. Sri Lanka is not a Singapore. Only a limited numbers of flights are landing in Sri Lanka daily. During night one fight lands every one hour or less than that? Why do we need one more Air port in this remote corner of Sri Lanka at this time? What are the economic benefits of such air port?

Do you think people from the other part of Island will be willing to travel through this airport in their air travel journeys? It was reported that this Air port is built is unsuitable and unfitting geographical location for many reasons. It was an ecological and environmental disaster as well. It has destroyed a large numbers of wildlife. It was reported that elephants and snakes are coming to near sides of the air port.

Air ports mainly depend on flight arrivals for their financial survivals. The more flights land the more profits Air ports make. Otherwise, government will have to spend a lot of money for day to day expenses of air port as well as wages for its employees. It is reported that only a few flights are landing in this air port right now. How long government could spend money to maintain Mattala Air port if enough flight arrivals are not materialised in coming years? Consider for instance if this Air port is built and developed in Jaffa or any part of Northern Province, it would have been commercially more profitable and more appropriate.

Why do I say this? Because today more 2 Million Tamils live abroad and most of them live in European countries. They would love to come to Sri Lanka if there is an Air Port in the Northern Province. It would make their travel back home easy and convenient. Moreover, it could have attracted more tourists from India particularly from Tamil Nadu. More inter-connections would have been made between such an Air port in Northern Province and South Indian Air port. It is physiological fear of Singhalese politicians that does not permit them to develop any mega projects in North. They all fear that if they develop Jaffna that would pave the way for Tamil EELAM.

I think that Singhalese should think broadly and diplomatically on the subject of Northern development programmes. It is a undeniable reality that Sri Lankan Tamil community have got money and they are ready to invest in the northern part of Island. Government should encourage them to invest in Jaffna for that government should expedite some mega development programmes in Jaffna. Constructing an international Air port in Jaffna would have been more appropriate than Hambantota from this perspective. Constructing Northern Express way into Jaffna would have been more profitable than Southern Express way to Hambantota. …. (To be continued)
SLG