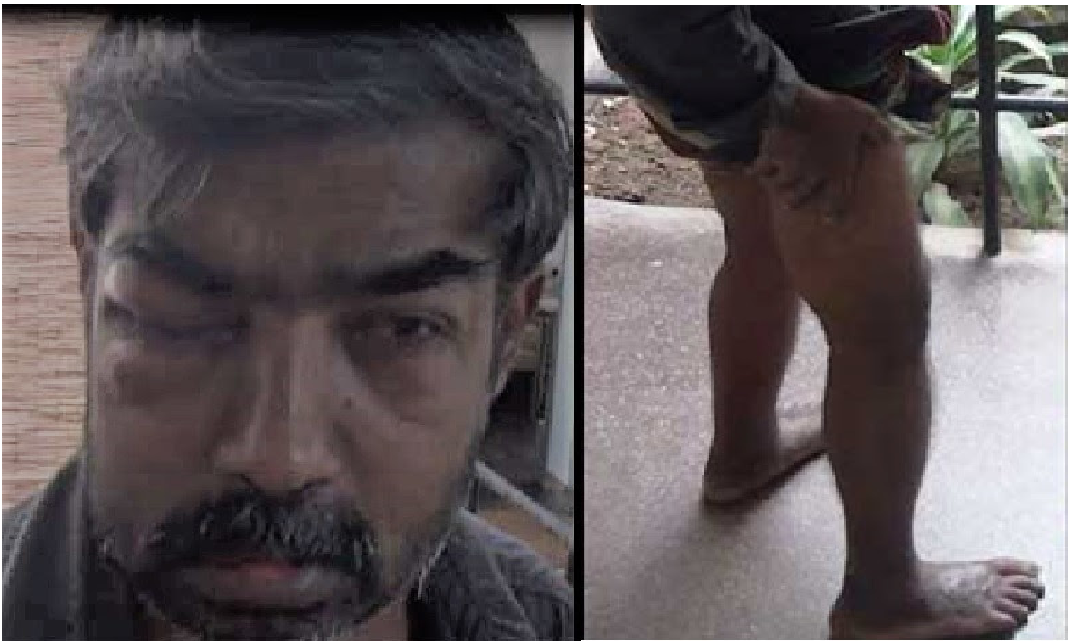 On 17 January, 2017, Wickrama Aarachchige Nimal, 55 years of age, a resident of No: 1/4/A, Wela Ihala, Handapangoda, in the Kaluthara District is a farmer, married with two children and his wife is a housewife. During the season when farming is not being carried out he engages in other minor agricultural work in the area as a daily paid labourer. His family and friends state that he is a peaceful citizen and had never been accused of any crime.

On 17 January, when he was outside his house, several police officers have arrived , inquired about him and when he identified himself, he had been immediately arrested without any reason being given and brought to the Ingiriya Police Station. Nimal states that he was not informed of the reason for his arrest, at any time before his arrest. At the police station, he was accused of a charge of possession of illicit liquor. He categorically denies the charge.

At the police station, Nimal had been severely tortured for denying the charge. He had been brutally assaulted on his face, his back, chest, legs, and shoulders and on his head by the police officers. Nimal had screamed in earnest and had pleaded with the police officers to stop the torture. However, those screams fell on deaf ears, as they continued to torture him into the night. Following the torture, later in the night he had been released on Police Bail under the Bail Act by the Officer-in-Charge (OIC) of the police station.

At the time of his release, he was told that he will need to appear before the Horana Magistrate’s Court on 25th of January 2017. He acceded to the request and he proceeded to return home with the greatest difficulty as he could not walk due to the torture at the hands of the police officers. Nimal states that police wanted to file a fabricated charge against him even though they did not find neither any complaint nor any evidence against him. He categorically states that the police never recovered any sort of illicit products in his possession.

Since he could not bear the pain from the bruises and contusions, he got himself admitted on the same day to the Ingiriya Government Hospital for treatment. The doctor who examined him initially had advised him to be admitted immediately. However, during the following two days while in hospital he was not provided with proper medical treatment and his health did not improve. Nimal states, that he believes that due to the influence of the officers who tortured him, the staff at the hospital deliberately ignored him.

On 19th January, he was discharged from the hospital and since his condition remained the same. Therefore, he got himself re-admitted, this time to the Horana Base Hospital. At this hospital while he was being treated at Ward No 1. he noticed a police officer who tortured him, visiting the ward where he was staying and talking to the house officer for long period of time. He also noticed the doctor in the ward laughing together with the police officer and pointing at him almost as if in ridicule.

Several minutes later, the police officer had approached Nimal’s bed and asked him if “are you going file case against the police” . Then he assaulted him with his fists again, in the hospital bed. Nimal at the time had remained quiet saying nothing in return, as he feared for his life. Thereafter he did not receive any proper treatment for his wounds and bruises, at the hospital. Nimal felt again that due to the influence of the police, and collusion of the medical officers at the ward with the police, he was being deliberately and maliciously ignored not provided with proper medical treatment. Despite the mistreatment he had reminded the doctors in the ward, and repeatedly that he was injured because of being tortured by the police and he notes that the ward doctor did not refer him to a Judicial Medical Officer (JMO) for examinations, as it should have been done.

On 20th January, Nimal was informed that he would be discharged and was asked to go home by the doctor. However Nimal, questioned the doctor for the reason to discharge him without having administered proper treatment and complained that he I still suffering physically due to the abuse and torture. The doctor had not paid any attention to his complaints nor was he provided with any document, medical record etc., upon being discharged and Nimal had to return home still in pain and to-date suffers from the abuse.

Nimal being unable to bear his pain, he returned to the Horana Town and sought an appointment with a private medical doctor for treatment. The doctor upon examination had advised him that given his situation he cannot treat him and to please seek treatment at the Horana Base Hospital and gave him a referral letter to be admitted to the hospital again.

He took the referral letter and admitted himself again at the Horana Base Hospital where he was admitted to Ward No: 15. This time he was properly examined and received treatment for the next 4 days. While he was treated there, the JMO examined him and recorded a statement and the nature of the injuries and scars on his body. When he was discharged after 4 days he was provided with a Diagnosis Card which indicated several marks of injuries of contusions and two more injuries which were described as two fractions of his ribs.

After returning home he still suffers from pain and the injuries because of the torture at the hand s of the police officers he had to receive treatment again as the pain in his eyes, face and the legs worsened.

Nimal has since, lodged several formal complaints against this gross violations of his rights requesting for an independent and efficient and impartial inquiry with regard to his ordeal at the police and in the two government hospitals, to the Inspector General of Police (IGP), the Sri Lanka Human Rights Commission (HRC), and the Deputy Inspector General of Police (DIG), in Kalutara.

However Nimal states that he did receive any justice whatsoever. He states that none of above mentioned authorities have taken any reasonable steps to provide him with any relief for all the injustices done to him and made no actions whatsoever towards the prosecution of the wrongdoers all whom acted contrary and in violation of the law of the land. Nimal seeks JUSTICE against the perpetrators and reparation for his injuries.

Please send letters to the authorities listed below expressing your concern about this case. Request an immediate investigation into the allegations of illegal arrest, detaining and the filing of fabricated charges by the Police. Those proven to be responsible under criminal law for misusing the powers of the State should be prosecuted. All officers involved must be scrutinized by an internal investigation for breach of Police Departmental Orders. Finally, please appeal to the National Police Commissioner and the Inspector General of Police for a special investigation into the malpractice of police officers who abuse their powers.