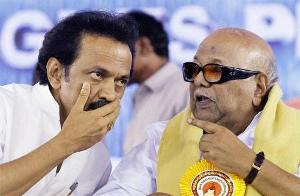 CHENNAI: The UPA’s key ally DMK on Friday threatened to pull out of the Union government if the Centre failed to support an amended US resolution against Sri Lanka to be moved at the March 21 UN session.
DMK chief M Karunanidhi said in a statement, “India should take all efforts to bring about amendments in the US-sponsored resolution in the UNHRC which should seek an independent probe into the genocide by the Lankan government.” The resolution should also seek to identify the war criminals, he said.

It must recommend strong action against them, he said. The DMK has five representatives in the Union government, including Karunanidhi’s son M K Alagiri, who is a Union minister.

Karunanidhi said, “The DMK’s continuance in the Union ministry will turn meaningless if India fails”. In recent days, the DMK chief has stepped up pressure on the Centre, strongly criticising statements of Congress leaders, including Union external affairs minister Salman Khurshid and party spokesperson Abishek Manu Singvi on the issue. Karunanidhi said the party has faced “only disappointment” from the Union government with regard to its stand on the Lanka issue. The DMK chief wondered what flawed logic impelled the Indian government to treat the island nation as a friendly neighbour.

Karunanidhi criticized Prime Minister Manmohan Singh and warned the UPA government saying, “The situation is reaching a flashpoint. We cannot watch silently.” Last year too, the DMK resorted to similar posturing on the eve of session of the UNHRC when the US moved a resolution against Sri Lanka. Photographs of 12-year-old Balachandran, son of the slain LTTE leader Velupillai Prabhakaran, circulated by Channel 4 recently have given pro-Tamil outfits fresh ammunition for their anti-Lanka campaign. The DMK too has been quick to seize the opportunity in raising the pro-Tamil pitch.

This is the fourth time in the last two years that the DMK is threatening to pull out its ministers from the Union government on the Sri Lanka issue and to demand a roll back of the petrol price hike. A senior DMK MP said that this time the party leadership was serious in its stand. “If the Union government fails to ensure amendments in the US resolution then we will be forced to pull out ministers. Stalin has been pressuring our leader to take a final decision in this regard,” he said. The DMK-back Tamil Eelam Supporters’ Organisation (TESO) has working hard for the Lankan tamil welfare in the past one year. “But Tamils are reluctant to support us wholeheartedly because of our alliance with the Congress,” the MP said.

The issue figured in the Parliament with DMK leader T R Baalu making a strong statement in the Lok Sabha “The students agitation, day by day, has become very tense. I do not know what will happen. I can only remind my friends what happened in 1965 on the language (anti-Hindi) issue. The agitation on language issue has cost the Congress to a very great extent. The congress has lost its rule in TN in 1965 and till now they could not come to power in TN,” he said.