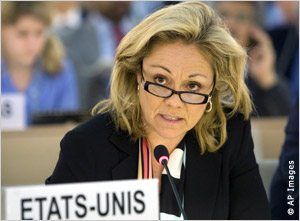 U.S. Statement at the Adoption of the UPR Report on Sri Lanka
March 15, 2013
The United States welcomes the return of the delegation of Sri Lanka to the Council and appreciates the opportunity to comment on their response to the UPR review.

We welcome the Government’s statement of its intention to accept recommendations to combat gender-based violence, to carry out an independent and credible investigation into the allegations of violations of human rights and international humanitarian law, and to strengthen the independence of institutions, including the Human Rights Commission, Police Commission, and Election Commission.

Major changes were made to the substance of recommendations after the interactive dialogue. This is inconsistent with the transparent, interactive character of the UPR.  We are also disappointed that the Government rejected nearly all recommendations regarding engagement and cooperation with UN special procedures mandate holders. We urge the government to expeditiously implement both the UPR and LLRC recommendations.