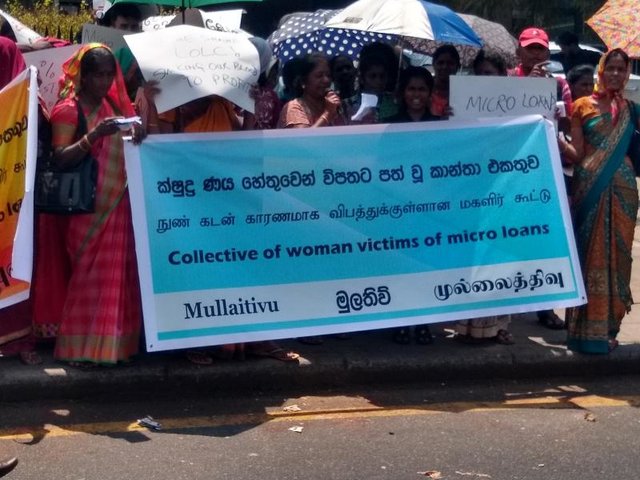 Hiruni, a fisherman’s wife, who has to manage her household (of five people) with an income of about 2.5 euros (= 500 Sri Lankan rupees) per day, is heavily indebted. In order to increase her household income, she borrowed 50,000 rupees (250 euros) from the LOLC bank, which specialises in micro-credit (https://www.lolc.com/lolc-micro-credit). With this money she started the production of insecticide-treated mosquito nets (as recommended by foundations such as Bill Gates’), which she sold for Rs. 2,000 (EUR 10) each. For a while this worked, but two factors beyond her control worked against her: 1. the grossly abusive interest rate charged by LOLC (over 50% real interest rate) and the huge penalties for late payments; 2. a powerful commercial firm started selling imported nets at 25% less and payable in two installments. Hiruni was not able to withstand this competition because the price offered by this firm was lower than her production costs. She had to stop production and marketing of nets and was no longer able to continue normal repayments. This led her to contract another loan from another bank in order to resume payments to LOLC. Hiruni is desperate and over-indebted.

The IMF’s actions has a direct impact on the fate of hundreds of thousands of women like Hiruni in Sri Lanka.

For years, the IMF has been pushing for an end to customs barriers protecting local producers, whether farmers, fishermen, artisans or others. This is one of the reasons why Hiruni and others like her can no longer make a living out of what they produce. The IMF, together with the World Bank and other international institutions, also promotes the deregulation of the banking sector and micro-credit. It supports the right of credit companies to set the rates they want, in the name of “freedom” of prices and the market. 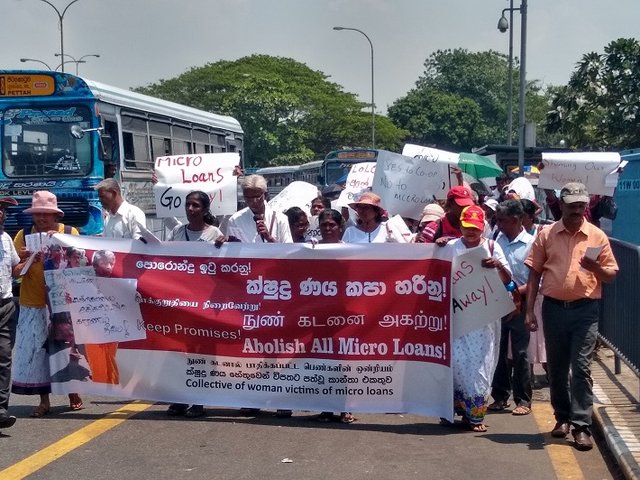 This is why Hiruni and so many others have to pay exorbitant interest rates. The IMF, in collaboration with other international institutions, put pressure on governments to privatize or close down public credit banks who were providing loans at reasonable, usually subsidized rates (i.e. without making profits), which the IMF and the World Bank abhor.

This is another reason why Hiruni and others cannot find credit from government sources.

To complete this negative picture, one must add several conditionalities imposed by the IMF’s credit policy handed out to Sri Lanka like so many other countries. The IMF wants the government to reduce the public deficit by cutting social spending and reducing government staff. As a result, Hiruni and millions of people in Sri Lanka witnessed the free education and health care drastically eroded. Indeed, Sri Lanka is one of the few countries where health and education are still free in principle, but the austerity measures imposed by the government in complicity with the IMF mean that the real cost of education (including primary education) and basic health is constantly rising, as school books and medicines have to be paid for, and parents are also being pushed into private education and health care to escape the falling public service. Therefore, poor families have to go into debt with micro-credit agencies to meet school and health expenses. And it is women who are most directly affected since they are primary responsible for ensuring education and health for their children.

The IMF states that the government’s decision to set a maximum interest rate of 35% on micro-credit loans can only be temporary because the distortion (sic!) of the functioning of the financial market must be avoided

The list of neo-liberal measures recommended by the IMF, having a disastrous impact on the daily lives of millions of people in Sri Lanka and hundreds of millions worldwide is enormous. 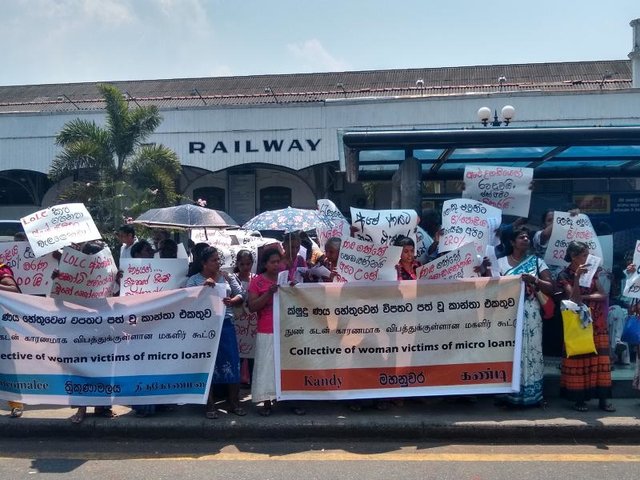 And this will only change if the people get rid of the IMF by electing such political forces in the government that have the will to bring radical solutions that ensure respect for social justice, the enjoyment of human rights and respect for nature.

In 2016, the neo-liberal government of Sri Lanka appealed to the IMF, which in return pledged $1,600 million in credit on the condition that it would follow the IMF’s recommendations. This programme is still being implemented and the balance sheet is entirely negative.

On 7 February 2020, an IMF visit to Sri Lanka was concluded. The press release of the Washington-based institution is highly significant (https://www.imf.org/en/News/Articles/2020/02/07/pr2042-sri-lanka-imf-staff-concludes-visit-to-sri-lanka ). The IMF states that the government’s decision to set a maximum interest rate of 35% on micro-credit loans can only be temporary because the distortion (sic!) of the functioning of the financial market must be avoided. It should be noted that the government set such a ceiling as it was under pressure from the streets. Thousands of women, victims of micro-credit and its abusive rates, had mobilized in the North of the country to demand that interest rates should not exceed 25% (which remains an extremely high rate since the inflation rate is only 4%). Setting the maximum interest rate at 35% is a limited concession made by the government in view of the scale of the social drama and the risk of extending the mobilizations. It should also be noted that in a very clear report, the United Nations independent expert on debt and human rights sounded the alarm about the dramatic situation experienced by the very many victims of micro-credit in Sri Lanka. His report, written after completing a field mission, was damning for the government, financial institutions and other foreign donors (https://www.ohchr.org/EN/NewsEvents/Pages/DisplayNews.aspx?NewsID=23482&LangID=E). He called on the government to act (https://lk.one.un.org/news/end-of-mission-statement-un-independent-expert-on-the-effects-of-foreign-debt-and-human-rights/).

The volume of Sri Lanka’s public debt has risen sharply over the past three years and now exceeds 90% of GDP. It should be recalled that the current IMF arrangement dates back to 2016. However, between 2016 and the end of 2018, public debt increased by 30%.

As a result of various forms of pressure exerted on it, the government set a maximum rate of 35%. Although this rate is still completely exaggerated and must be characterized as usurious, the IMF has the audacity to state in its press release of 7 February 2020 that it is necessary to soon restore the right to freely set rates!

The IMF also calls on the government to end as soon as possible the moratorium on the payment of debts of small and medium-sized enterprises. It must be said that following the terror attacks of April 2019, tourists have deserted Sri Lanka for months, which has damaged the economy and in particular small and medium enterprises. In order to prevent an increase of bankruptcies, the government has decreed a suspension of payment of their debts and it is this measure that the IMF is also asking to be cancelled soon.

In addition, the IMF calls on the government to continue austerity measures and the underhand and gradual privatization of state-owned enterprises. This applies in particular to SriLankan Airlines, the oil company and the electricity company (see https://www.imf.org/en/Publications/CR/Issues/2019/11/04/Sri-Lanka-Sixth-Review-Under-the-Extended-Arrangement-Under-the-Extended-Fund-Facility-and-48787).

The European Union is not to be outdone. Its investment bank, the EIB, actively supports micro-credit enterprises that exploit and despoil hundreds of thousands of women in Sri Lanka

The IMF calls on the government to deepen international trade liberalisation and measures to attract foreign investment. The negative consequences of this policy are well known. 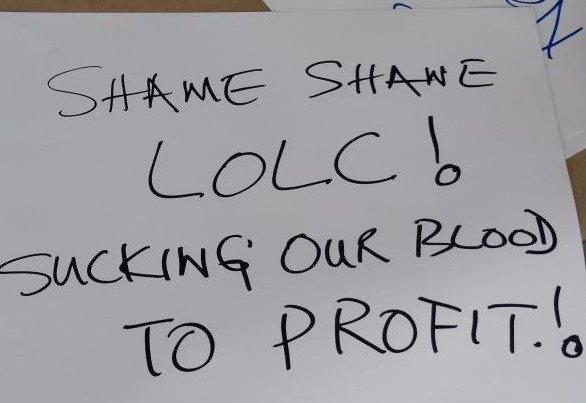 The volume of Sri Lanka’s public debt has risen sharply over the past three years and now exceeds 90% of GDP. It should be recalled that the current IMF arrangement dates back to 2016. However, between 2016 and the end of 2018, public debt increased by 30%. This means that IMF action has actively contributed to the increase in Sri Lanka’s debt, increasing the country’s dependence on foreign and domestic lenders. Although a small part, debt in the form of sovereign securities issued in foreign financial markets has doubled in volume. In percentage terms, it has increased by 50 per cent.

The IMF is banging its fist on the table to call on the government to implement a firmer policy of austerity in public spending.

Hiruni, like the overwhelming majority of Sri Lanka’s population, has no fair expectations from the IMF.

The CADTM, which held its 8th South Asia Regional Workshop in Colombo in February 2020, supported the struggle of victims of government and IMF policies. The UN Independent Expert on Debt and Human Rights sent a message to the CADTM workshop participants that address the substantive issues (https://www.cadtm.org/Message-from-Juan-Pablo-Bohoslavski-the-UN-expert-on-Debt-and-Human-Rights-to).

It should be noted that, in addition to the fatal agreements with the IMF, the deadly action of the Trump Administration also plays a significant role in the deterioration of the living conditions of a large majority of the Sri Lankan population. One of the channels of Washington’s intervention is a federal agency created in 2004, called the Millennium Challenge Corporation, which has been active in Sri Lanka since April 2019 (see https://www.mcc.gov/where-we-work/country/sri-lanka ). It assigns good or bad ratings to the countries in which it operates (see https://www.mcc.gov/who-we-fund/scorecard/fy-2019/LK). Its deleterious action is combined with that of USAID, the other federal agency that strongly encourages further job insecurity in Sri Lanka (so that the IMF does not deal with it directly).

CADTM joins Hiruni and all those who, like her, have finally decided to resist

The European Union is not to be outdone. Its investment bank, the EIB, actively supports micro-credit enterprises that exploit and despoil hundreds of thousands of women in Sri Lanka. It should also be noted that the so-called ethical European private bank Triodos also invests in the microcredit business in the country (https://www.lankabusinessonline.com/tripartite-finance/).

Of course, we must not forget China, for which Sri Lanka occupies a geo-strategic position in terms of trade routes. China is building a number of ports without taking into account the preservation of the environment, and it is doing so while putting Sri Lanka into debt. China is not giving a gift either.

CADTM joins Hiruni and all those who, like her, have finally decided to resist. For after having been a passive victim, Hiruni joined the action of active resistance like many other women who demonstrated in Colombo on 27 February 2020 to request that the government respond to their demands.