Sri Lanka: ICJ expresses concern over JSC seminar & insists that Judges must be left alone to make their own independent decisions 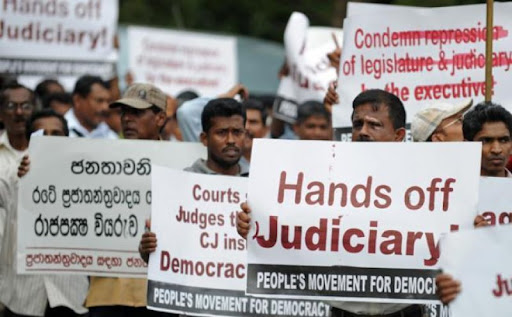 The ICJ today expressed its concern regarding the recent seminar convened by the Judicial Service Commission (JSC) at which magistrates and other judicial officers were reportedly instructed to use certain sections of the Criminal Procedure Code to control protests and other public gatherings from taking place in the midst of the COVID-19 pandemic.

“Instructing or otherwise suggesting to judicial officers to use exceptional measures to curb public protests amounts to undue judicial influence,” said Ian Seiderman ICJ’s Legal and Policy Director. “Such decisions must be left to be made by individual judges on the merits of each case.”

The event held under the theme “Matters relating to judicial proceedings in the context of the COVID-19 pandemic” was conducted on 13 August 2021 at which 35 judicial officials were told to attend in-person while 165 were instructed to attend the seminar virtually. The seminar took place in the wake of recurring protests that are being staged against the Government over various issues of public interest. The ICJ has previously expressed concern that the Police authorities have attempted several times in the recent past to stifle peaceful protests by misusing Covid-19 regulations.

The ICJ also deplores the threat contained in a letter issued by the JSC Secretariat to all judges that failure to participate in this event could impact ‘promotions, annual salary increments, foreign training and appointment to the High Court.’

“Effectively coercing judges into attending a meeting of this nature, especially by stating that non-attendance could adversely impact their judicial careers is unacceptable,” Seiderman added. “International standards governing conditions of service and tenure of judges should be based on objective factors provided by law, such as ability, integrity and experience, rather than on failure to attend one seminar.

The ICJ calls for the withdrawal of the threats made against the judges.

Principle 2 of the UN Basic Principles on the Independence of the Judiciary affirms that “the judiciary shall decide matters before them impartially, on the basis of facts and in accordance with the law, without any restrictions, improper influences, inducements, pressures, threats or interferences, direct or indirect, from any quarter or for any reason.”

Principle 13 states that “Promotion of judges, wherever such a system exists, should be based on objective factors, in particular ability, integrity and experience.”