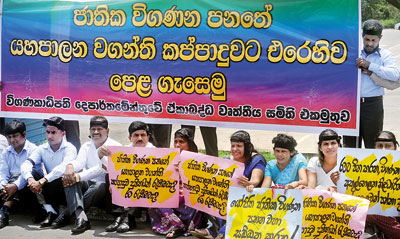 Image: a campaign against curtailing the Natioanal Audit Bill.

Transparency International Sri Lanka (TISL) is concerned by reports that the Cabinet of Ministers plans to curtail the proposed powers of the Auditor General, under the National Audit Bill, which would limit the Auditor General’s ability to hold individuals personally liable for losses caused to State entities.

TISL urged the Government to retain these surcharging powers, which are in keeping with international best practices, whilst being mindful of the opportunity to further detail the surcharge and appeals process at the committee stage of Parliament.

The National Audit Bill, which has been certified by the Attorney General, has three key provisions. First the power of the Auditor General to impose personal financial responsibility or surcharges on individuals who have caused financial loss to a State entity through fraud, direct willful negligence, misappropriation or corruption; second the power to examine bank accounts in which the Auditor General believes that monies belonging to a State entity have been fraudulently, irregularly or wrongfully deposited; and third an independent budgeting mechanism designed to safeguard the independence of the prospective National Audit Office.

In light of these three provisions, the draft National Audit Bill incorporates, to varying degrees, the venerated guidelines on public auditing: the Lima Guidelines. Most notably the powers of investigation and enforcement of audit findings and financial independence of Supreme Audit Institutions (SAIs) have been recognised. The principle on enforcement recognises that SAI’s could be empowered to issue legally valid and enforceable judgments (e.g. powers of surcharge), TISL said in a statement.

TISL Executive Director Asoka Obeysekere stated: “Whilst surcharging powers should be retained, it would be prudent to ensure that the law specifies ever clearer processes for the imposition of a surcharge. At the same time, the appeal procedure needs to be unbiased and devoid of any appearance of conflict of interest for the Auditor General. TISL believes that the current bill raises issues in these two matters, which can be remedied and strengthened at the committee stage of Parliament.”