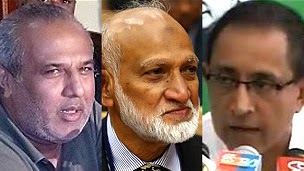 Govt. MPs have finally realised the lurking danger – Kabir HashimMuslim government and Opposition MPs have joined forces with the exception of two to petition President Mahinda Rajapaksa requesting him to rein in the Bodu Bala Sena (BBS) and restore law and order.
Sixteen of the eighteen Muslim MPs with the exception of A.R.M. Cader and A.H.M. Azwer   have in a letter to the President sought his immediate intervention to stop the BBS from harassing the internally displaced Northern Muslims who were driven out of the North by the LTTE in 1990 and forced to live in different parts of the country as refugees and “Forgotten People” over the last 23 years.
The decision by the government and Opposition MPs to act jointly was taken at a recent meeting convened by the Muslim Council of Sri Lanka (MCSL).
Chairman of the UNP, Kabir Hashim MP who is a signatory to the petition told “The Island” he was happy that Muslim government MPs had at long last realised the lurking danger and injustices that were being perpetrated against their community and religion by extremist elements such as the Bodu Bala Sena (BBS), Sihala Ravaya and Ravana Balakaya, which obviously had the backing of powerful personalities within the ruling establishment.
“I and MP M.H.M. Haleem gladly signed the petition on behalf of the UNP which reflected what we have been saying right along, that unless President Rajapaksa intervenes the campaign against religious minorities would blow up into a national calamity”, Hashim said adding that he hoped the President would act even at this late stage and not continue to shirk his responsibilities.The other MPs some of whom are also Ministers  who  had signed the petition were A.H.M. Fowzie, Rauff Hakeem, A.L.M. Athaullah, Rishad Bathiudeen, Basheer Segu Dawood, Faizer Mustapha, M.S. Thowfeek, Faisal Cassim, Hasan Ali, M.S.M. Aslam, M.L.A.M. Hisbullah, H.M. Haris and Unais Farook.
The Muslim IDP’s, the petitioners pointed out had been labeled as Old IDPs’ and did not even benefit from the resettlement scheme implemented by the government and international agencies including the cash grants provided by the UNHCR. “In the absence of any substantial support, the Muslim religious, political and civil society leadership had solicited support for their resettlement from benevolent donors of Muslim countries and individuals. There had been some positive response and a small number of houses were constructed with the support of donors after following all due procedures of land distribution through the Divisional Secretariat and the Presidential Task Force for resettlement. However the BBS and some sections of the media were falsely highlighting their resettlement now as illegal, by claiming that some Northern Muslims had encroached into the Wilpattu National Park.”
The joint appeal has called for immediate Presidential intervention to also end the continued hate campaign, intimidation and threats to Muslims carried out by extremist elements such as the Bodu Bala Sena (BBS), Sihala Ravaya and Ravana Balakaya which also targeted Muslim places of worship, halal food and Muslim attire.

By Zacki Jabbar
IS