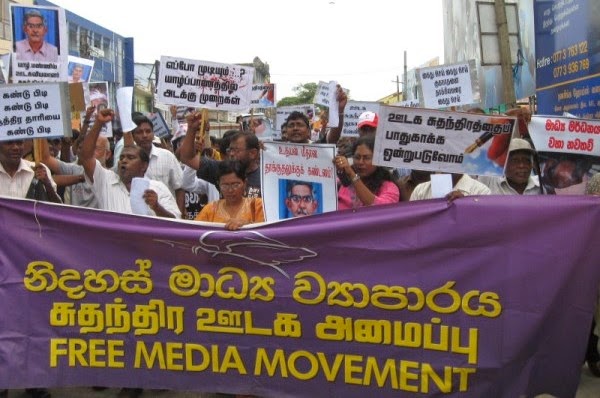 Press release/03.05.2014
On the World Press Freedom day 2014, the Free Media Movement of Sri Lanka, reassure its unwavering commitment to press freedom and democracy. Freedom of the press is the basis of all freedoms. It is the freedom of expression that provides a level playing field for the struggle of all human rights of all peoples.
World Press Freedom day is an important day for media professionals as well all those who respects the democracy and human rights. On this day concerned people all over the world engage in an ever widening and deepening discussion of the role of press freedom in promoting and enforcing of human and democratic rights. Press freedom is not an end in it self; its role is to serve the human kind in its progress march towards more humane, equitable and democratic existence.
Unfortunately, in Sri Lanka, we are regressing in to backwardness; the rights we used to enjoy decades ago are made to disappear day by day. This state of affaires is confirmed by various indexes that measure freedom of expression world wide. For example Impunity Index of the Committee to Protect Journalists (CPJ) groups Sri Lanka with 10 worst offenders.  Reporters without Borders 2014 World Press Freedom Report places Sri Lanka at 165 out of 177 countries. According to the 2014 Freedom of the World Report by the Freedom House Sri Lanka gets 76 out of 100 bad marks. According to number of other indexes like Failed State Index we are competing to be the worst, not to be the best.
In short the reality of this frightening picture is that once the freedom of expression is suppressed all other freedoms too start to sink.
Sri Lanka is a country coming out of 3 decades of   war. The war is over but the conflict is not. The dream of peace, reconciliation and development belongs to all peoples in our country. The foundation of making this dream a reality is ensuring peoples rights. Any genuine endeavour towards this noble aim needs to be based on empowering the people. For this end, the full enjoyment of the right to freedom of expression is essential. Without freedom of expression there is no space for   informed discussions and decision making. For media to play its role qualitatively and quantitatively the freedom and respect of the media community and the media has to be established.
But we, the Sri Lanka, media community are still living with the memories of  unprecedented repression unleashed on them, especially since 2005. Those experiences are still fresh and haunt us just because that no justice has been delivered. Killers and assailants, who are responsible for the war against journalists in Sri Lanka, are at large, roaming around. Impunity for the crimes against media and journalists reigns. In such a context intimidation and threats against media and journalists creates larger than life fear-psychosis. Media and journalists become paralysed giving way to self censorship.
Today the economic and political grip of the government over media has reached fearful levels.

The only way out form this unfortunate’s situation   depends on our commitment and enthusiasm towards defending and strengthening democracy in Sri Lanka. In this struggle the media and journalists community has an important role to play. Its responsibility is huge. Achieving peace, reconciliation and development in Sri Lanka will depend on our ability and willingness to take on these challenges as community as well as society.

On this day of World Press Freedom, the Free Media Movement salutes all media and journalists who are committed to and performing their duty  towards strengthening human rights and democracy in our country despite of the  increasing repression.