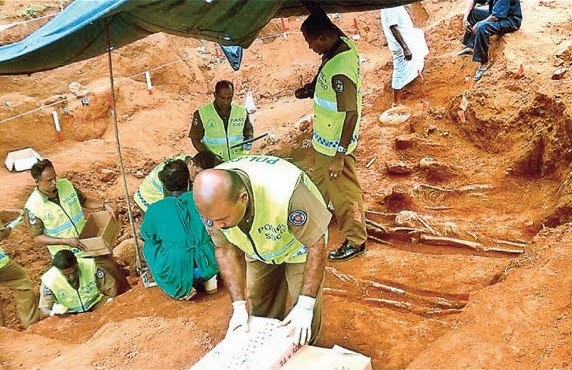 AFP – Colombo: A Sri Lankan family has stumbled upon the remains of at least nine bodies buried in the garden of their home, police said Saturday, the latest mass grave to be discovered in the country’s former war zone. The family made the grisly find on Friday while clearing out their garden in the town of Puthukkudiririppu in the northern district of Mullaittivu, police spokesman Ajith Rohana said.
“Remains of nine people had been found so far and the skeletal remains were taken for analysis by the judicial medical officer in the area,” Rohana told reporters.
The discovery comes just days after officials raised the number of bodies found in December in an unmarked mass grave in the adjoining district of Mannar to 80.
It was the first grave uncovered in the ex-war zone since troops defeated Tamil rebels nearly five years ago following a decades-long conflict for a separate homeland for ethnic minority Tamils.
The final battles between government forces and Tamil Tiger rebels were fought in the Mullaittivu district which was a stronghold of the separatists guerrillas for over two decades.
The United Nations estimates the ethnic war between 1972 and 2009 in Sri Lanka claimed at least 100,000 lives.
Friday’s discovery comes ahead of a UN Human Rights Council (UNHRC) session starting Monday in Geneva where Sri Lanka faces a US-led censure resolution criticising Colombo for its alleged failure to probe war crimes. It would be the third such motion.
Last month, the Public Interest Advocacy Centre in Australia accused Sri Lankan authorities of exhuming mass graves and destroying evidence of civilian killings, a charge denied by Colombo.
Sri Lanka’s President Mahinda Rajapakse has said he is committed to ensuring investigations into any allegations of wrongdoing by his security forces and challenged his accusers to provide evidence.
Last year, construction workers stumbled on another mass grave in central Sri Lanka, hundreds of kilometres (miles) from the conflict zone.
At least 154 people were found in Matale district, the scene of an anti-government uprising between 1987 and 1990 unrelated to the Tamil separatist conflict.
Remains from that grave have been sent to China for further tests.
Share
Facebook
Twitter
WhatsApp
Pinterest
Email