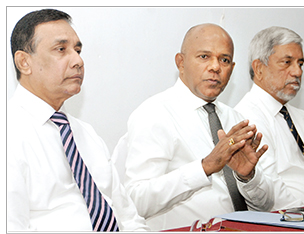 Three retired service commanders, Air Chief Marshal Roshan Goonetileke), Admiral Tisara Samarasinghe and General Daya Ratnayake, has  alleged that the war winning military was being penalised in terms of the Geneva Resolution co-sponsored by the government, in Oct 2015. They were speaking at a special press conference organised for the same purpose on 13 Oct 2019.

They all considered to be supporting ex-Defence Secretary Gotabaya Rajapaksa in the upcoming presidential election.

They have requested President Maithripala Sirisena, who is also the Commander-in-Chief of the Armed Forces, to intervene to ensure those who risked their lives were treated with dignity and honour.

Retired service chiefs have called a special media briefing at the Sri Lanka Foundation Institute (SLFI) to bring to tlal about what they called a relentless campaign directed against some individuals. They expressed their  concern over alleged attempts to take wartime Navy Commander Admiral and former Sri Lanka Ambassador to Japan Admiral Wasantha Karannagoda into custody regarding some wartime disappearances (2007-2008).

On  February 22, the CID named Admiral Wasantha Karannagoda as the 14th suspect in the murder of 11 young men abducted in Colombo in 2008.

Urging the government not to go after the military to appease those foreign powers responsible for Geneva Resolution against Sri Lanka, General Ratnayake had said that they were seriously concerned about the ongoing operation targeting the military.

With the inputs from Lankaeyewitness