Sri Lanka does not condone or tolerate any form of torture, Govt tells NYT 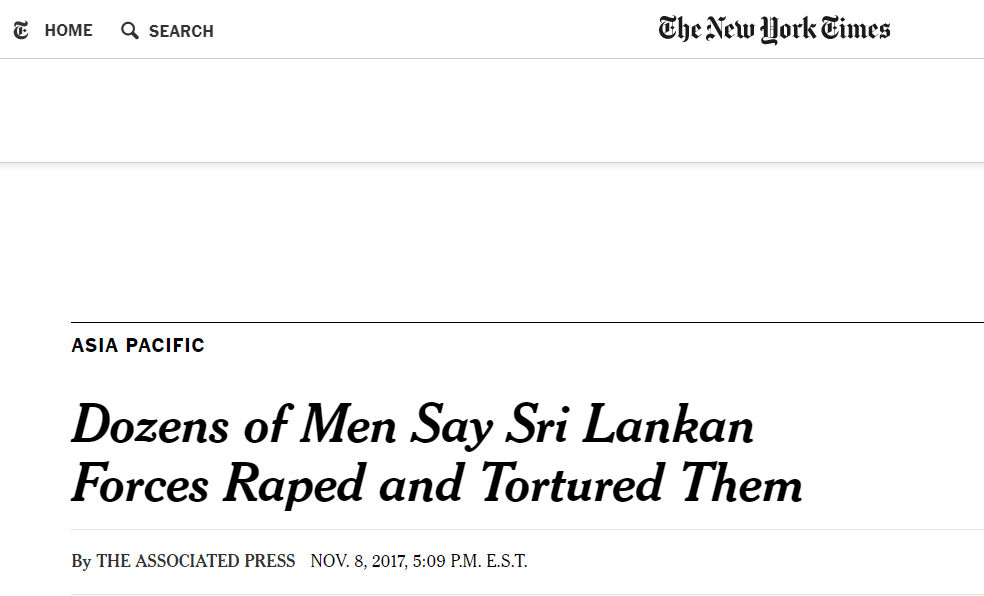 In a reply to the article titled ‘Dozens of Men Describe Rape, Torture by Sri Lanka Government’ by the Associated Press that was published in the New York Times Sri Lanka government says that it does not condone or tolerate any form of torture, and seeks to work with all, including bilateral partners, as well as international organisations, to seek their assistance in terms of sharing experiences and expertise, as well as technical support, to ensure the elimination of this despicable practice and prosecute anyone responsible.

Full  text of the letter sent to The New York Times;

The Editor
The New York Times

Dear Editor,
I write with reference to the article titled ‘Dozens of Men Describe Rape, Torture by Sri Lanka Government’ by the Associated Press that was published in the New York Times.

It would be appreciated in this regard, if this response from the Government of Sri Lanka could also be published in the New York Times, considering the gravity of the allegations and the firm commitment of the National Unity Government to uphold the rule of law.

The Government of Sri Lanka strongly condemns any act of torture, and will ensure that allegations of torture committed in the country will be investigated and prosecuted to the full extent of the law.

The Government seeks the assistance and cooperation of all those relevant parties in this endeavour, including parties outside the country, as evidence is key in the conduct of investigations.

The National Unity Government that was formed in Sri Lanka following the January 8, 2015 Presidential Election and the August 2015 Parliamentary Election, is committed, as promised to the people of the country, to work towards reconciliation, good governance, rule of law, and the promotion and protection of human rights, and has taken numerous concrete steps to prevent the commission of torture, including the following:

-Strengthening the National Human Rights Commission and ensuring that they are granted access to places where there may be complaints of torture
-Issuance of orders to all police and security officials forbidding torture of any kind, with punishment to the full extent of the law, if violated
-Issuing a standing invitation to Special Rapporteurs with 6 visits having taken place already since January 2015, including visits by the High Commissioner for Human Rights (February 2016) and the UN Secretary-General (September 2016)
-We have welcomed and continue to welcome visits by human rights organisations, including to the places where allegations of torture have been made, so that they can see for themselves that such illegal and reprehensible actions are not taking place in the country
-The National Human Rights Action Plan (2017-2021) which was launched recently, has a complete chapter on the Prevention of Torture, with indicators for action to be taken, and we are committed to its implementation
-The President of Sri Lanka himself participated in a march organized by the National Human Rights Commission in June 2016, to advocate against torture and affirm the zero tolerance policy on torture at the highest level of Government
-A Committee on Prevention of Torture, established by the Ministry of Law & Order, chaired by the Secretary to the Ministry, convenes monthly meetings to discuss the progress made by relevant stakeholder institutions in ensuring Government’s zero tolerance policy on torture

The total number of officers trained in 5 batches was 800. The Minister of Law & Order, the Secretary to the Ministry of Law and Order, and the Inspector General of Police attended all workshops in order to emphasize at the highest level, the Government’s commitment to the zero tolerance policy on torture and to prohibit the use of torture as a means of investigation. The officers were informed that action will be taken against any errant member of Police on three fronts. i.e. disciplinary action, criminal charges under the Convention Against Torture Act, and civil suits.

An important decision made by the Committee is the decision to initiate investigations regarding cases under Article 11 of the Constitution, once the Supreme Court grants leave to proceed for such cases. Earlier no such action was taken until the Supreme Court delivers judgment on a case.

A recent judgement delivered by the Court of Appeal (12/2016) stipulating the investigation procedure regarding complaints of torture has been circulated among all police officers through an internal circular.

All high-ranking officers have been instructed to reiterate the above during instruction classes that are conducted for their subordinates on a weekly basis.

A special unit has been established under the Deputy Inspector General (Legal) to monitor complaints relating to assault and torture by members of the Police. The unit:

– Monitors internal messages regarding public complaints on assault and torture that are received from territorial Superintendents of Police (SPs).
– Monitors media report on the above and compares statistics in such reports with the internal messages received.
– In the event of a discrepancy, instructs the territorial SPs to send reports on matters raised in the media which they have failed to report on.

A Special Investigation Unit (SIU) functions directly under the Inspector General of Police (IGP) and conducts investigations including through the use of scientific evidence. SIU comprises skilled officers who are trained in collecting not only physical evidence but also forensic evidence. The standards stipulated in the Istanbul Protocol on mechanism to investigate torture cases, have been incorporated into the Police training curricular. Almost all the convictions, legal action, disciplinary action against Police Officers referred to above have been taken based on investigations conducted by the SIU. The SIU has no decision making power with regard to the action to be taken after an investigation and such decision making is done only by the Attorney General’s Department.

The Government of Sri Lanka does not condone or tolerate any form of torture, and seeks to work with all, including bilateral partners, as well as international organisations, to seek their assistance in terms of sharing experiences and expertise, as well as technical support, to ensure the elimination of this despicable practice and prosecute anyone responsible.

Yours sincerely,
Prasad Kariyawasam
Secretary to the Ministry of Foreign Affairs of Sri Lanka