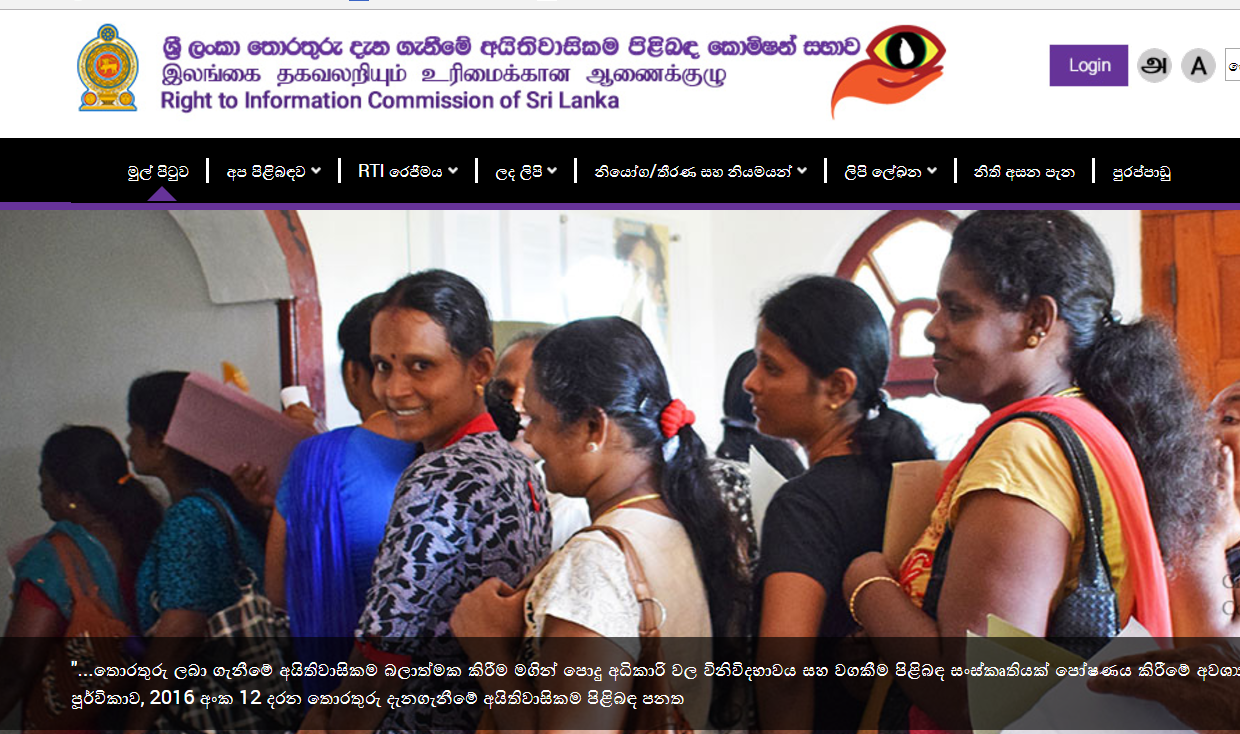 It is now proved how incompetent the country’s Law and Order Ministry and the institutions that comes under it are, following the offices of the Inspector General of Police (IGP) Criminal Investigation Department (CID), Terrorist Investigation Division (TID), Police Narcotic Bureau (PNB) and Special Investigation Unit’s (SIU) failed to provide information this newspaper requested under the Right to Information (RTI) Act on April 22.

Several reminders via e-mails were followed after the application on RTI was sent by this newspaper since there were no acknowledgements over the last two months but to no avail.

A senior high ranking government servant who wished to remain anonymous said that what is purpose of bringing the RTI Act, if the government departments itself disregard this Act openly. “If the government officials are not bound to provide information under this act, what could we expect from private companies? This shows how weak this government is. Had this act was introduced during the previous regime, the then rulers would have implemented in such a way that every government officer should bound to give details requested,” sources said.

Following an assault on a civilian police employees inside the west side elevator of the new secretariat building of the Police Headquarters by the Inspector General of Police Pujith Jayasundara on April 11, 2017 morning, The Sunday Leader although requested the IGP’s office, the CID, TID, PNB and the SIU seeking information relevant to IGP’s visit to the New Secretariat building on Tuesday April 11, neither the said departments, Law and Order Ministry acknowledge receipt of the requests made nor provided the information needed for the past two months.

This alone shows how incompetent the present government is and how they are trying to conceal an offense the Head of Police Department had allegedly committed.

Although section 24 (3) of the Right to Information Act (RTI) No. 12 of 2016 states that, on receipt of a request, an information officer shall immediately provide a written acknowledgement of the request to the person seeking the information with regard to the IGP’s visit to the New Secretariat building and his subsequent assault on a civilian police employee and screaming at a woman police sergeant.
Meanwhile, the civilian police employee has sent a letter to the Chairman Constitutional Council, Speaker of the Parliament on June 7, but so far has not received even an acknowledgement. In his complaint to Constitutional Council Chairman, the victim Abhayakoon Mudiyanselage Samarakoon Banda had stated what he had to undergo while he was on duty at the New Secretariat Building elevator in the hands of the IGP but sources closer to Banda says that the they do not expect justice for Banda.

However reliable sources from the Police Commission when contacted by this newspaper said that the Commission has no powers to take action against the IGP as there are no powers to do so but against any other ranker, the police commission can take immediate action.
When contacted Chairman Constitutional Council MP, Karu Jayasuriya few weeks ago to find out as to whether his commission can take action against the Law and Order Ministry, the Office of the IGP, CID, TID, SIU and PNB for their failure to provide details requested under the RTI Act and whether the Constitutional Council has the authority to take appropriate action against the IGP for assaulting a government servant who was on duty, Jayasuriya confirmed that they do not have powers to take action against any person but only to recommend people for certain posts. “If these government departments have failed even to acknowledge receipt then speak to the Commission Right to Information and find out what action they can take against these institutions,” Jayasuriya said.

Meanwhile questions were posed to the Commission of Right to Information to find out as to what action they could take against these officers for their deliberate failure to send acknowledgments to which, member of the RTI Commission, S.G. Punchihewa said that in the event if the applicant did not receive any acknowledgement, an appeal can be send to the Commission.

Appeal was made
Although an appeal was made to the Commission immediately as requested by Punchihewa, on April 28, it’s surprising to note as to how the Commission Right to Information too failed to acknowledge receipt or called upon all parties together with the applicant and held an inquiry for the past two months.

The appeal stated as follows:-

Dear Chairman and Members of the RTI Commission,

I am appealing directly to you regarding the above, as I am unable to formally discern the identity of the Information Officer or Designated Officer for Appeals, per the Right to Information Act, at the Sri Lanka Police, despite numerous inquiries. These particulars are not posted on the web site of the Police, www.police.lk

On April 22, 2017, I sent the attached request under the RTI directly to the Inspector General of Police, with copies to several senior police officers and the Secretary, Ministry of Law and Order, via e-mail. I have earlier today sent copies of my follow-up communications to the members of this Commission.

I have not received any reply from any police officer, nor have I received written acknowledgement of my request, as required by Section 24(3) of the RTI Act. Confidentially, police headquarters sources at a very high level have informed me that the Inspector General of Police is personally in receipt of my request, and is attempting to devise a means of quashing it without providing the requested information.
Separately, Police Spokesman DIG Priyantha Jayakody has contacted me multiple times this week to try to find out the sources of the information used in my related article, published in The Sunday Leader issue of April 23, 2017, but even this has not led to any written confirmation that my request has been received.

Furthermore, when I contacted Law and Order Secretary Mr. Jagath Wijeweera to verify that he had received my copy of the request e-mailed to him, he said he was unaware of such a request. When pressed on whether he was familiar with the incident that led to the request, Mr. Wijeweera declined to respond, and did not answer further calls or text messages.

Therefore, my grounds for appeal are that I reasonably believe that the Police are working to deform, destroy or misplace critical portions of the information I requested, in order to prevent me from having access to the information, and thus cover up criminal offences and violent crimes committed on camera by the most senior law enforcement officer in Sri Lanka.

Therefore, I urge this commission to initiate an inquiry and prevail upon the Sri Lanka Police to (i) Immediately acknowledge, in writing, my request dated April 22, 2017, copy attached; and (ii) Lawfully process and respond to the request.
Please contact me if any further information is required.

Although all these government institutions and the officers concerned are maintained by taxpayers hard earned money, if they fail to discharge their duties what is the purpose of spending millions of rupees on them?

Prior to the assault the video shows the IGP extending his hand and raising his tone at several officers in the lobby, and later running in pursuit of a senior officer who ran away into the car park after seeing the IGP.

While the video clip seen by The Sunday Leader did not contain any audio, an officer present at the scene, who declined to be named for fear of retaliation by the head of the police, claimed that the IGP had shouted in Sinhala “onne tie karrayek giya”, which translates to ‘there goes an officer in a tie!’

Despite being confronted about the existence of the video footage, the then police spokesman DIG Priyantha Jayakody insisted that the incident was completely fabricated by ‘enemies of the IGP’ in order to sabotage the positive initiatives he has taken to bring reform to the police force. He cited a circular issued by the IGP on April 17, 2017 instructing all officers to report to work by 8:15 AM and not leave before 4:15 PM.

“Before it was common practice for officers to only report for duty at 10 AM. Now they have to come by 8:15, and whatever their religion, they are instructed to observe a meditation period of 15 minutes soon after the national anthem has been sung at 8:30 AM. Now the IGP has also ordered that the police flag be hoisted at 6:30 AM daily at every police station, as even the armed forces observe a similar practice,” said DIG Jayakody.

The police spokesman also drew my attention to a report on the Lanka-e-news website, and asked if my story is copied from that article, I denied it. He reemphasised that the allegations contained in that Lanka-e-news report were baseless, without merit and intended to tarnish the positive reputation of the IGP. He insisted that no complaint has been received about this incident by any police station.
The video shows several officers witnessing the assault, including uniformed and plainclothes aides on the IGP’s personal staff, several of whom can be identified from the video and compelled to give evidence if an impartial and independent inquiry is undertaken into the incident.