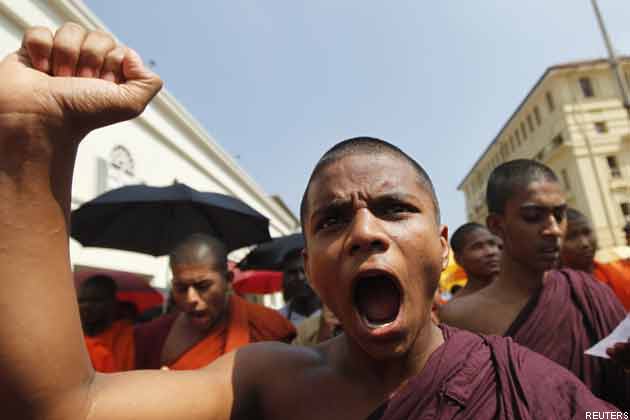 Developments unfolding in Sri Lanka over the last few weeks look ominously similar to those in 2013-14, when a surge in targeted attacks against minority Muslims and Christians went unchecked by the Rajapaksa administration. The Muslim Council of Sri Lanka, an umbrella organisation for civil society groups, has recorded 25 attacks on mosques and Muslim-owned establishments since April, and the National Christian Evangelical Alliance of Sri Lanka has reported over 40 incidents in 2017.

Amid growing concern among civil society and the international community, as well as mounting pressure on the government by Muslim MPs, reassurance came from the highest levels. President Maithripala Sirisena asked the Law and Order Ministry to act against perpetrators without fear or favour, and Prime Minister Ranil Wickremesinghe vowed tougher laws to address hate crimes.

However, a recent remark by Justice Minister Wijeyadasa Rajapakshe did not quite square with the leaders’ statements. He issued an open threat to disbar human rights lawyer Lakshan Dias for pointing to attacks on the Christian community, while on a television show. That Mr. Rajapakshe, who is also the Minister for Buddhist Affairs, chose to threaten the lawyer rather than counter his argument with facts has shocked many. International human rights watchdogs have urged the government to take action against the Minister, whose threat they saw as an attempt to silence critics of the government’s inaction.

Meanwhile, controversial Buddhist monk Galagodaatte Gnanasara Thero — who was in hiding following charges of hate crimes against Muslims — surrendered at a Colombo court on Wednesday, after evading arrest for a month. He was arrested in court, only to be granted bail soon after. Mr. Gnanasara heads the hard-line Sinhala-Buddhist organisation Bodu Bala Sena (BBS, or Buddhist Power Force). He has in the past been accused of stoking communal tensions, including in Aluthgama, a southern coastal town where violent clashes claimed four lives in 2014, and faces many cases. Over the last few months, he was again seen airing provocative anti-Muslim sentiments, while reports of attacks in different parts were mounting.

Following 35 complaints, including 21 pertaining to hate speech, the police have arrested 15 people. Arresting a Buddhist leader and arresting a layman is not the same thing, spokesman Priyantha Jayakody said at the Cabinet briefing this week. There were cultural sensitivities to be considered, he said.

His view has to be seen alongside the significant influence Sri Lanka’s Buddhist clergy wields on the country’s political affairs. A day before Mr. Gnanasara surrendered, a powerful Buddhist sect, the Asgiriya chapter, issued a statement attacking the government on its move to arrest the monk. The council said that while Mr. Gnanasara’s actions may not be acceptable, his concerns about threats to the majority could not be ignored. The government must take corrective action, it urged.

The Prime Minister assured that the government was considering new laws, suggesting shortcomings in existing legislation. But Sri Lanka’s independent Human Rights Commission noted that the recent incidents amounted to crimes under Sri Lanka’s Penal Code and its ICCPR Act. “Laws existing on the statute books without implementation have a corrosive impact on the rule of law,” the Commission cautioned, in a letter to the President.

The question that remains is whether tackling religious intolerance is a legal challenge or a political one.