Sri Lanka: CPRP requests Government to include PTA detainees in granting bail and relief to prisons due to pandemic. 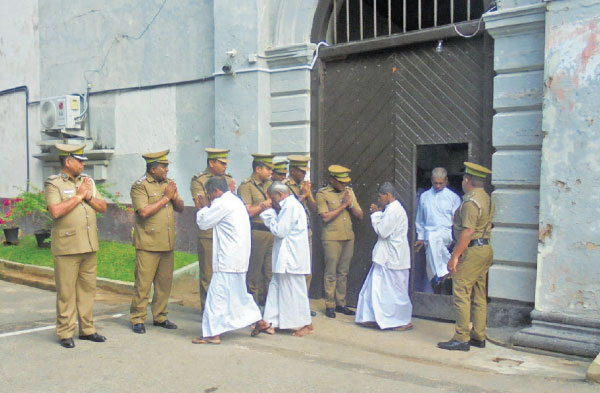 File photo: Number of prisoners were released under Presidential pardon for the National Independence Day, 2020.

Making an appeal on behalf of persons detained under the Prevention of Terrorism Act the Committee for Protecting the Rights of the  Prisoners, has requested the Attorney General to include them also in the in schemes for bail and relief now being implemented due to corona pandemic.

Recognizing the dangers in spread of COVID-19 in prisons, especially in overcrowded ones such as Sri Lanka, countries across the world have started to release prisoners. On 4th April, the Presidential Media Division in Sri Lankan announced that 2,961 prisoners had been released between 17th March and 4th April1. On 9th media reports indicated that you had drafted guidelines for the police to move courts to release on bail some prisoners remanded on drug related offences2 and we note that you have advised the police to further broaden the type of prisoners to be released by your letter dated 11th April 20203.

While thanking you and welcoming these moves, we are disappointed that you have excluded those detained under the Prevention of Terrorism Act (PTA) from being considered for bail. You are no doubt aware of longstanding appeals to consider bail and release for those detained under the PTA, and delays in this regard had been an obstacle for post war reconciliation also led to expression of concerns internationally, such as by the UN Working Group on Arbitrary Detention4 and UN Special Rapportuer on Promotion and Protection of Human Rights and Fundamental Freedoms while Countering Terrorism5. PTA detainees are amongst prisoners who have languished for long periods in prisons. Most of those in longest detention are Tamils, arrested and imprisoned during and just after the war. PTA detainees includes suspects against whom no indictments have been filed, accused whose trials have not been completed, convicted whose appeals are pending and those convicted.

Amongst the unconvinced long term PTA detainees is Mr. Tiron Malcom (Negombo High Court case no. HC/136/2012 and Negombo prisoner no. 5329). He was arrested in 2008 and is still in Negombo prison. He was indicted in 2012 along with another accused, but due to death of the other accused, his trial was subjected to long delays. The submission of a death certificate of the deceased accused took around 2 years and 8 months and amendment of charges took about 2 more years. Delays were also caused by the absence of police and witnesses on some days court hearings were scheduled. The trial has been presided by 9 High Court judges and Terrence’s physical and mental health has deteriorated due to about 12 years in detention.

There are reports where a PTA detainee has spent 15 years in prison before indictments were filed and 20 years for case to be concluded6.

There have also been reports where prisoners were acquitted as not guilty by courts after spending long years in prison, including 15 years in one case7. Multiple cases have been filed against one person in different courts in different districts, including 15 cases against one person. The PTA has resulted in arbitrary arrests, prolonged detention without charges, long drawn out court cases, multiple cases against one suspect, inhumane detention conditions, torture and long years to release suspects and accused who are not guilty.

Unlike in trials related to many other crimes, confessions in police custody are allowed in PTA cases. This has made PTA trials longer, as even persons typing the confession needs to come to testify. The tendency to obtain forced confessions through torture or threat of torture8 has brought about “Voir doir” inquiries to check if confessions were given freely, and this too has lengthened trials. Many Tamil detainees have been forced to sign confessions written in Sinhalese, a language they didn’t understand9. Many of the detainees have spent most of their youth behind bars, and their mental and physical wellbeing has been severely affected due to long term detention, rigorous interrogation and torture.

Unlike other detainees, Magistrates don’t have discretion on grating bail to PTA detainees and they can only be given bail with your consent. Hence, we kindly request you to include PTA detainees in schemes for bail and relief, and in particular, to give your consent to release on bail to some of the unconvinced PTA detainees.
Thank you.
Sincerely yours,