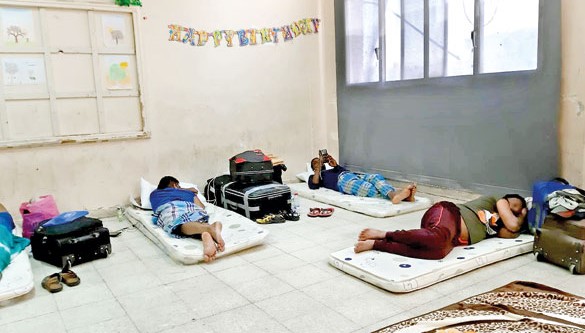 Image: Sri Lankan migrant workers have been sending billions to Sri Lanka to boost its foreign exchange resources. But now with the coronavirus pandemic, most of them want to come home. Till they are brought back, some of them are seen here sleeping on mattresses on the floor of a detention centre in Kuwait.

Sri Lanka’s migrant worker numbers are more manageable than nations like India and Phillippines and those who wanted to return could have been repatriated faster. Namini Wijedasa reports

Please highlight the plight of our Middle East workers in your writing,” said a message via Facebook. “Thousands are on the street, awaiting return.”

This was on April 26, more than a month ago. The first repatriation from that region took place on May 7. The flight from Dubai had a mix of 197 released prisoners, students, visit-visa holders who had lost jobs and accommodation, medical emergencies, pregnant women and a single safe house occupant.

It was another 13 days before the next repatriation from West Asia. Two Kuwait Airways flights with 466 passengers landed on May 19. They were mostly Sri Lankan workers who had lost employment status and applied for a Kuwait Government amnesty allowing them to leave without penalty and to return to work in future. The rest were deportees.

Passage was paid for by Kuwait. As in other Gulf countries, foreign workers are governed by the “kafala” system which ties their legal status to a specific sponsoring employer. The law precludes them from being hired by another employer for the duration of the contract.

Countless Sri Lankans across West Asia have violated these terms and are now deemed out-of-status. Some have changed employers while others held lucrative part-time gigs, often in multiple places. The pandemic rendered them jobless.

These “illegal workers” are scattered around the region. The problem is not Sri Lanka’s alone. But where other nations–like India and the Philippines–have hundreds of thousands to contend with, Sri Lanka’s numbers are more manageable. Those who wanted to return could have been repatriated faster.

What wasn’t made public was that even those two planeloads were allowed back after the Kuwait Government lost its patience over Colombo’s failure to grant approval for the transfer. Sri Lankans had between April 20 and 25 to apply for the amnesty and 385 registered. They were sent into camps where, presumably, conditions were not similar to quarantine centres.

On April 25, Minister of Foreign Relations Dinesh Gunawardena met the Kuwaiti Ambassador and sought an extension of the amnesty. It was granted. By mid-May, however, the Kuwaitis were livid. A diplomatic row loomed.

Sri Lanka’s Ambassador was summoned to the Foreign Ministry in Kuwait City and given a talking to. The Prime Ministers of the two countries also had a conversation. And the Kuwaiti Foreign Minister telephoned Minister Gunawardena on May 18 and expressed his strong displeasure at Colombo’s apparent disregard for the terms of the amnesty.

They agreed that those in camps, including deportees, would be permitted to return immediately. The flights left Kuwait the very next day. “Getting these people back was not a choice,” an official source said, on condition of anonymity. “It was a compulsion.”

Kuwait’s position was that people must be accounted for. Illegal workers performed odd jobs that required frequent coming-and-going. They posed a risk. Amnesties are offered from time to time and hadn’t caused controversy before.

The highest number of Sri Lankans to categorized as “vulnerable” by the Ministry of Foreign Relations live in Kuwait. The number that has requested repatriation is 16,300. The Kuwaitis say close to 18,000 are out-of-status workers. A total of around 100,000 Sri Lankans are employed there but more accurate statistics are required.

Sri Lanka’s public position was that quarantine and health facilities could be overburdened if it started accommodating the large numbers from West Asia that wished to come home. And there was some concern in the health sector that hospitals, which had coped well thus far, would be overwhelmed.

The Director General of Health Services wanted those in line for repatriation to be tested before department. But Gulf countries either have rules precluding tests without symptoms or charge exorbitantly. Any such screening has, therefore, to be done on arrival in Sri Lanka.

Privately, it was also admitted that “remittances mattered”. Even the money earned by “illegal” workers was, after all, money. Not only were the Kuwait returnees brought through external pressure, a section of the group from Dubai (the released prisoners) were also forced by that Government to be taken out.

The lag may have caused the highly virulent COVID-19 to spread more widely among camp inmates in Kuwait. Of the 466 that arrived, 321 had tested positive at the time of going to press. That is nearly 70 percent of returnees.

Some officials admit that migrant workers are just not on the administration’s radar, even when directly confronted by their suffering.

“Everyone hears about the university students,” one said, wishing to remain unnamed. “Or about the man who went abroad to visit his son and is being ill-treated by the daughter-in-law. Or the person who traveled for medical treatment and now wants to get back. Has anybody told you about the housemaid on the road? It’s only now that you are seeing it on social media.”

The Government, he said, is missing a sensitivity chip. The language reflects this. When Mahindananda Aluthgamage claimed that the Kuwait Government had selected those with COVID-19 and sent them back–and that “they have struck us with a bomb”–it was widely picked up and criticized by workers.

The wide perception is that Sri Lanka prioritized the return of influential citizens over the labour in West Asia. This is despite early recommendations from both the Ministry of Foreign Relations and the Ministry of Labour that workers be brought back on a staggered basis, starting from the most vulnerable (economically as well as to the disease).

The Ministry of Foreign Relations submitted three Cabinet papers on the matter and the Ministry of Labour, one. The fear was that, if the Government did not move faster on the susceptible groups, there will be bigger problems to deal with.

That time may have come, said an employment agent: “It’s a real mess, now.”

We have to bring them back in controlled manner: Govt. official

Despite the economic contribution of these workers, the Government is hesitating to facilitate repatriations from West Asia because of the high risk that the majority of them are infected with COVID-19, as tests these past few days have proved.However, the delay could lead to diplomatic issues as anger among these populations grows and they become more demanding. At present, many are dependent on handouts. Those who were employed in companies, including the hospitality trade, and “illegal” workers are most vulnerable.

The Sri Lankan Government intends to upgrade several more hospitals and open quarantine centres in order to receive people, authoritative sources said. But the Gulf countries neither offer these migrant workers treatment nor testing facilities. This makes it impossible to determine just how many more hospital beds or other facilities are required here.

“They have to be brought back in a controlled manner,” a senior official source said. “We need a mechanism for this and it requires cooperation from those Governments also. We just can’t plan hospitals without knowing how many are there. We are not a rich country.”

Two flights that were expected to transport 275 Sri Lankans from Maldives and another 275 from Dubai were suspended at the time of going to press. They had been planned for June 4 and June 8, respectively.

But flights are on schedule to arrive from Australia on May 30 and from Singapore on June 2. Also planned are Philippines (June 10) and yet another from London for Sri Lankans in Canada and Europe (June 6). The latter has been marked as “Priority” by authorities.

The first repatriation flight was from Wuhan on February 1 with 33 Sri Lankans on board. They were mostly university students and their families. Between March 19 and 22, six flights carried pilgrims who had been stranded in India back home. On 21 April, 106 Sri Lankans left Pakistan. They, too, were predominantly students.

On April 27, a total of 73 students were repatriated from Bangladesh. Hundreds of workers, meanwhile, are still begging to return. On May 3 and 5, there were two flights from Britain, USA and Canada with 309 on board.

It was on May 6 that the first flight left Dubai/United Arab Emirates with 197 Sri Lankan passengers. On the same day, 186 students were repatriated from Singapore. And three days later, 275 Sri Lankans left Australia. The majority of them were students.

On May 10, students living Malaysia were brought back. On May 14, Maldives saw the departure of 284 Sri Lankans. The next day, 235 Sri Lankans left Japan.

On May 16, a flight brought 72 citizens from Myanmar followed, on May 17, by 69 Sri Lankans who were in Thailand. Finally, on May 19, two Kuwait Airways flights brought 466 Sri Lankans home.

A total of 110 people arrived from Indonesia on May 21; and on May 23, a second flight left Bangladesh with 276 Sri Lankans on board. Two days later, there was a flight from Moscow/Ukraine carrying 181 Sri Lankans, predominantly students.

On May 25, a flight from Qatar scheduled to transfer 275 Sri Lankans home was suspended, prompting the Secretary to the Ministry of Foreign Relations to instruct the relevant Embassy to find accommodation for them. It was allowed to proceed two days later.

A flight with 277 Sri Lankans, mostly students, left Belarus on May 28.

It’s risky to get ill with COVID-19 in Kuwait, says returnee

A Kuwaiti returnee quarantining at the Minneriya camp said that a group of 70 men returned on the first flight together. Of them, 48 have now tested positive for the virus but none had any symptoms.

However, one man who had fever in Kuwait but was nevertheless placed on the flight has tested negative.

This returnee, who did not wish to be named, has worked in a club in Kuwait which suspended operations with the lockdown there. He took advantage of the amnesty but his wife, an uncle, sister and brother-in-law are still in Kuwait on valid contracts, living in rented accommodation. None of them are receiving any pay from their jobs.

He spent 20 days in an army camp organised by the Kuwait Government for amnesty-seekers and another seven days in a school. He thinks that his group may have contracted the virus from bedding that some Egyptians had used before them.

The risk of getting ill with COVID-19 in Kuwait, he said, was that they are not accepted in hospital. “A friend had it and spent two days in hospital before being told to go home and drink Paracetamol and vitamins,” he related. “Now his mother has got, and she’s also at home.”

Some Sri Lankans left behind in Kuwait are in a safe house provided by the Embassy, he said: “Others are scattered all over the place without passports, on roads, wherever they can find.”

On April 21, more than 2000 of them converged on the Embassy requesting emergency travel documents so that they could avail themselves of the amnesty. They were turned away.

“That is why they are helpless today,” the returnee said. “First they went to the camp where the Kuwaiti authorities were accepting amnesty applications. But a large number had no passports so they were told secure emergency documents. That’s why they all went to the Embassy gate.”

“Instead of issuing the documents, the Embassy called the police and they sent some buses to take the people away and dump them here and there,” he continued. “A friend called from there and asked if I could try and trace a woman who was at the Embassy but now is missing. We don’t know where she is.”

“Today, I spoke to an aunty who was working in a salon which is now closed,” he said. “She said that she was going to see if there is food being distributed anywhere so that she could get some.”

“If they got the travel documents that day, the Kuwaiti Government would have sent them all back at their expense, just as they did with us,” he pointed out.