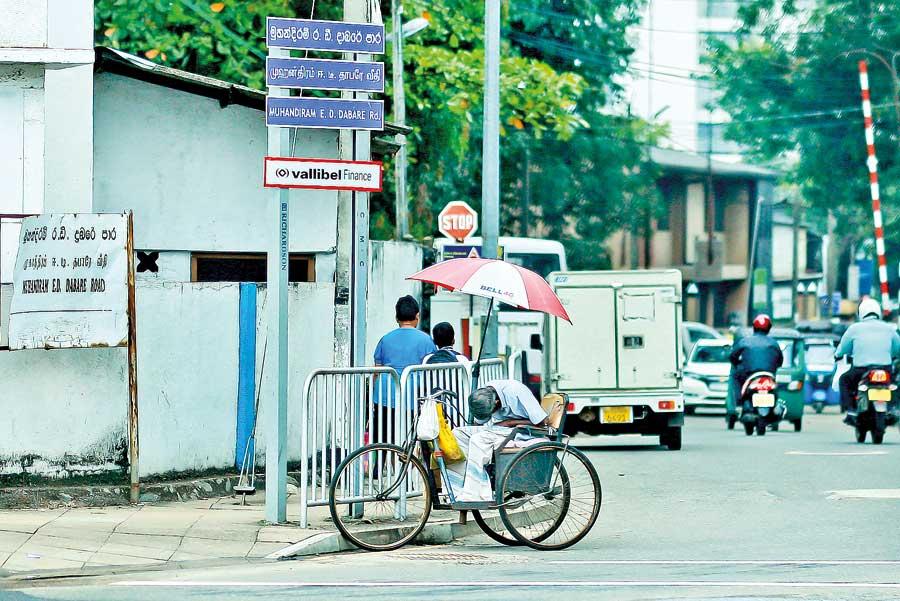 There was a time when they frequented the streets, happy to receive a few coins or a packet of food. Conveniently addressed as beggars, they too are a part of society.

In fact sociology experts refer to them as depicting the true picture of a particular society. But as cost of living soared there was an influx of beggars – like a pandemic there were more and more of them. It then took the shape of a business and at one point they were not happy with coins or food. They wanted notes! It was then that they became a nuisance – those who gave them a few coins as a meritorious deed turned their backs on them. Begging became a nuisance to the point that on a few occasions they were removed from the streets of Colombo as means of ‘beautifying the city’.

The newly elected Government too seems to be standing firm in its decision to remove beggars and as a first step begging was banned in trains with effect from December 1. Beggars are dropping in numbers and much is spoken about them in social media forums regarding establishing a detention centre for them; all this giving rise to people’s concern for them.  With that in mind the Daily Mirror took to the streets to observe any reduction in the numbers while revisiting the Vagrants Ordinance.

An ordinance subject to ridicule

Sri Lanka still follows the Vagrants Ordinance that has remained in statute books for 178 long years. Introduced in 1841, the Ordinance was brought about during the British colonial era and hasn’t been amended to meet present day requirements. Adding to it’s ridiculousness are the fines included in several clauses that reads as follows :

The highest fine as per the Ordinance is Rs. 100 apart from whipping and imprisonment. There have been instances when alleged perpetrators were brought before the law and were charged Rs. 10 whereas the cost of hearing the case and lawyers charges would have been much more. There have also been instances when the Police made ‘good’ use of the Vagrants Ordinance to warn couples seated by the roadside to behave properly. However, legal experts claimed that they are being encouraged to make use of unjust laws such as the Vagrants Ordinance. Therefore, as we are nearing the end of a decade, it is high time to have a good look at the Ordinance that has already gathered cobwebs in statute books.

A marked reduction in numbers

While on its rounds, the Daily Mirror observed a marked reduction in the number of beggars in places they frequent. During a trip from Jawatte Road to Kochchikade via Narahenpita, Borella petrol shed, Borella Junction, National Eye Hospital and the Fort Railway Station via Maradana we counted around five of them whom one would describe as mentally unstable. It is common to see one or two of them emerge during a heavy traffic, but this time there weren’t any encounters.

While it is an obvious nuisance for those who are on their way to work or home, there have been instances when some of them have refused coins and food parcels justifying suspicions as to whether they are doing it as a business. The begging phenomenon was blown out of proportion to a point that one could hardly distinguish between a genuine person who is actually homeless and doesn’t have money from a pseudo-beggar. However, the Government banned begging on trains from December 1, but commuters in buses have also observed a zeroing of these individuals who would otherwise board public transport and relate a story or perform an act to earn a few bucks.

No directive was given to Police stations: SSP Gunasekara

In a statement issued regarding the removal of beggars, former Police media spokesperson, attorney-at-Law SSP Ruwan Gunasekara has denied allegations of the removal of beggars by Police. “There was no order given by the Police Headquarters to other Police stations to remove beggars and send them to a detention Centre in Ridiyagama,” said SSP Gunasekara.

In his comments to the Daily Mirror, State Minister of Urban Development Gamini Lokuge said that the Government has to discuss with the Social Service Ministry and study the current situation with regard to beggars. “We will have a plan for them in the future,” he said. When asked about media reports which claimed that beggars in Colombo would be taken away to a detention centre in Ridiyagama, Lokuge refuted claims and said that such a plan still isn’t in effect.

Above photo from Damith Wickramasinghe and Samantha Perera/DM