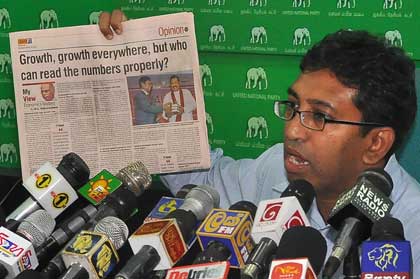 Packer’s package bigger than health budget
The annual tax concessions running into more than Rs 120 billion that the government will be giving to global gaming giant, James Packer, for the proposed 35-40-storeyed casino complex, will be more than the annual health and education budgets, an opposition legislator charged.

UNP National List MP and its Economic Spokesperson, Dr. Harsha de Silva told Ceylon Today, the health budget for 2013 was a mere Rs 95 billion and the annual education budget stood at Rs 121 billion. All casinos in the country are operating illegally as they are not operating under proper licences, costing the government millions in the process, but that opportunity cost was infinitesimally small compared to the government’s impending losses through the Packer operations, Dr. De Silva, alleged.

He said, there is a liability of Rs 100 million per year according to the latest laws, which have been enacted from 1 January 2012, since introducing the old Gaming and Levy Act of 1988, but there have been no payment of taxes as they have been operating illegally through political patronage.

Despite the Rs 100 million payments, what the government was losing was considerably high, the UNP MP charged.

“This is an absurd state of affairs where the government will be losing what should have been legitimate revenue but, will not be the beneficiary of the taxes which will run into around Rs 120 billion,” Dr. de Silva told Ceylon Today.“The policy of this government is, of the superrich, for the superrich and by the superrich,” he said adding that the proposed complex, which is to be put up by the premier blue chip corporate leader John Keells Holdings PLC Group at the Justice Akbar Mawatha (former Bridge Street) complex – which also houses the current Ceylon Cold Stores building and factory – has decided to pay all taxes. However, JKH Group Chairman, Susantha Ratnayake, and Deputy Group Chairman, Ajit Gunewardene, were not available for comment.

Investment Promotion Minister, Lakshman Yapa Abeywardena, when contacted, refused to comment, claiming that he was to answer all these allegations in Parliament on 24 and 25 October.
By Ravi Ladduwahetty
CT