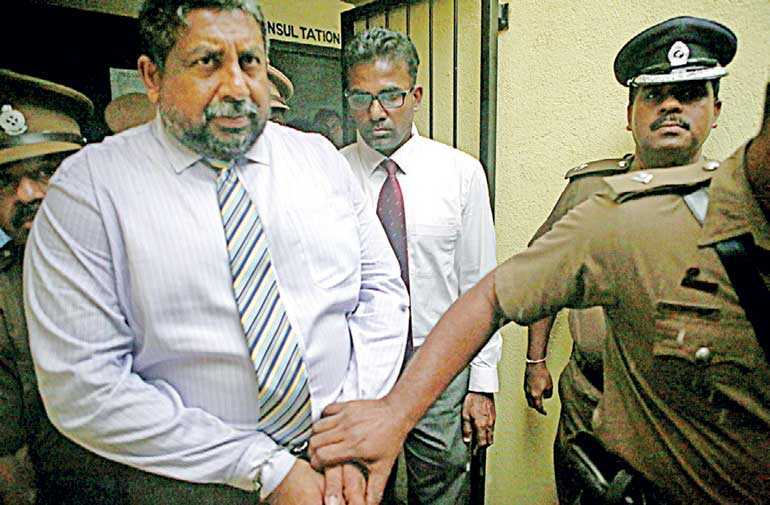 By a Special Correspondent.

Stunning scenes unfolded outside the Fort Magistrate’s Court yesterday, when the country’s highest ranking military official, Chief of Defence Staff (CDS) Ravindra Wijeguneratne, was remanded for allegedly protecting the leader of a Navy abduction racket, accused of the kidnapping and suspected murder of 11 Tamil youths during the height of the war.

Fort Magistrate Ranga Dassanayake, who has been pressuring the CID to arrest the top military official over several weeks, denied the suspect bail after a full day of hearings on Wijeguneratne’s bail application, and remanded the CDS until December 5. The Magistrate ordered special protection for the CDS while in custody.

Three warrants had been issued for the arrest of the Chief of Defence Staff, but the burly officer has been evading the CID and flouting summons for interrogation. Yesterday morning, when the inquiry was taken up at the Fort Magistrate’s Court, Wijeguneratne turned up in uniform, with security and escorts in tow. He was asked to surrender to court by the Magistrate, and was named as second accused in the case.

The case against Wijeguneratne has been filed separate to the main inquiry into the boys who went missing between August-October 2008. Naval Intelligence officer Lt. Commander Chandana Prasad Hettiaarachchi, alias Navy Sampath is the main accused in the abduction case and the man investigators say Wijeguneratne was helping to evade arrest when he was serving as Commander of the Navy.

Hettiarachchi is believed to be the ringleader of the Navy ransom racket, which resulted in the abduction and suspected murder of 11 Tamil and Muslim youth from Colombo, including five University freshmen.

The Fort Magistrate said he would base the decision about bail for Wijeguneratne on two main factors, namely, the allegations he had made against CID investigator Nishantha Silva in an attempt to have him transferred, and the alleged assault and intimidation of a main witness in the case on Sunday.

A packed courtroom watched as the military chief, decked out in full regalia stood in the dock, vigorously denying charges being lodged against him by the CID that he had tried to influence the investigation, by seeking to have the chief investigating officer transferred and intimidating a key witness just last week.

Wijeguneratne denied that a discussion had taken place about CID IP Nishantha Silva at the National Security Council that nearly led to the star sleuth’s transfer out of the Department. He claimed that the only time the CID officer’s name had come up at the NSC meeting was when someone noted that his name was not “really Nishantha Silva, but Nishantha Candappa”.

For months, the Chief of Defence Staff has been evading arrest in the high profile abduction and murder investigation. He failed to report when he was noticed to appear before the CID on September 10, leaving for Mexico the morning of his scheduled interrogation. After his departure, President Maithripala Sirisena intervened directly with the CID and Attorney General to prevent Wijeguneratne’s arrest, and called emergency Cabinet meetings at high noon to urge his Ministers to stand against CID efforts to arrest the decorated naval officer.

Undeterred, the CID has pursued its case.

Last week, IGP Pujith Jayasundera wrote to Defence Secretary Hemasiri Fernando, saying that Wijeguneratne had made an allegation against IP Nishantha Silva, claiming that a discussion had happened at the National Security Council meeting on November 13 that Silva had links with the LTTE. In spite of a glowing character certificate about Silva’s integrity, lack of evidence about the allegations, and recommendations that action be taken against the CDS under the Victim and Witness Protection Act for attempting to influence an investigation in writing from the Senior DIG in charge of the CID, the IGP still transferred Silva. In his letter to Secretary Fernando, the IGP said that the transfer was effected on the orders of the President. Outrage followed over the attempt to influence high profile cases Silva was handling at the CID, including the Lasantha Wickrematunge assassination probe and the Keith Noyahr abduction case, resulting in his reinstatement within 24 hours.

The CID produced the IGP’s letter in court yesterday as proof of Wijeguneratne’s attempts to sabotage the investigation.

The Fort Magistrate also adjourned court for a few hours, to summon the Fort OIC to present a report on the complaint made by Lt. Commander Geethal Laksiri that a group accompanied by Wijeguneratne that had entered the Navy officers’ mess on the afternoon of 25 November (Sunday) had assaulted him and sought to intimidate him. Lt. Commander Laksiri, having occupied a room adjacent to Navy Sampath’s at the Officers’ Mess, is a key witness against Wijeguneratne.

The Fort OIC told court that his officers were not permitted to enter the Navy Officers’ Mess for 24 hours after the complaint was made, to investigate the allegation.

After being reprimanded by the Magistrate for arriving in court and standing in the dock in full military regalia, Wijeguneratne sped off in his official vehicle during the adjournment, and returned later in civil clothes. Appearing for the CDS, Anuja Premaratne PC told court that Wijeguneratne did not have the “wildest notion” that he would have to be in the dock when he had arrived in court that morning.

Premaratne PC, arguing for bail for his client, said Wijeguneratne had always acted in accordance with Navy protocol, and said the CDS had been unfairly stigmatised in order to exact revenge. He said the complaint against the CDS of harbouring and aiding and abetting the first suspect was a bailable offence. Premaratne PC further contended that there was no victim in the alleged crime, and therefore no application could be made on behalf of victims, but the submission was rejected by the Magistrate. He also denied his client had evaded questioning and arrest, saying the CDS had communicated his inability to be present at the CID to the Defence Secretary, but this message had not been properly relayed. At one point during Premaratne PC’s submissions, Magistrate Dassanayake urged him to speak up, so that the “poor men in the cell at the back of the court room could hear him and make the same arguments to claim leniency from arrest.”

Counsel for the victims’ families Achala Seneviratne slammed Wijeguneratne’s departure during adjournment, saying that even as bail was being considered for the ranking military official, he had walked out of court without leave, and his security personnel had assaulted journalists outside the courtroom.

The Attorney General’s Department was a notable absentee during yesterday’s court proceedings. At the last hearing, the AG had launched an effort to block Wijeguneratne’s arrest, leading to a verbal battle between the DSG in the case and Counsel Seneviratne, who was appearing for the victim families.

Having heard out the police, lawyers for the victim families and lawyer for the accused, the tough Fort Magistrate declared that the drafters of the Criminal Procedure Code had not contemplated a situation when an investigating officer with sufficient evidence was unable to carry out an arrest due to ‘pressure’.

“Salute to those courageous investigators who did not bow down to the highest of the Executive and military,” tweeted senior Lawyer J.C. Weliamuna, soon after bail was rejected for the Chief of Defence Staff. “To quote Aristotle ‘It is in justice that the ordering of society is centred’,” he said, adding, “Sri Lanka has hopes in the Judiciary!”

CID investigations have revealed the abducted boys were held at the Naval Prison in Colombo and were later seen in detention in underground cells at Gun Site, inside the Trincomalee Naval base, but have not been heard of since. Several senior naval officers have been arrested in connection with the racket.

The boys were detained on the pretext of having maintained links to the LTTE, but were in fact held for a ransom racket, with naval officers attempting to extort millions from the families of the relatively wealthy victims.

2018 marks a decade since the families of the missing boys began their quest for justice.
FT