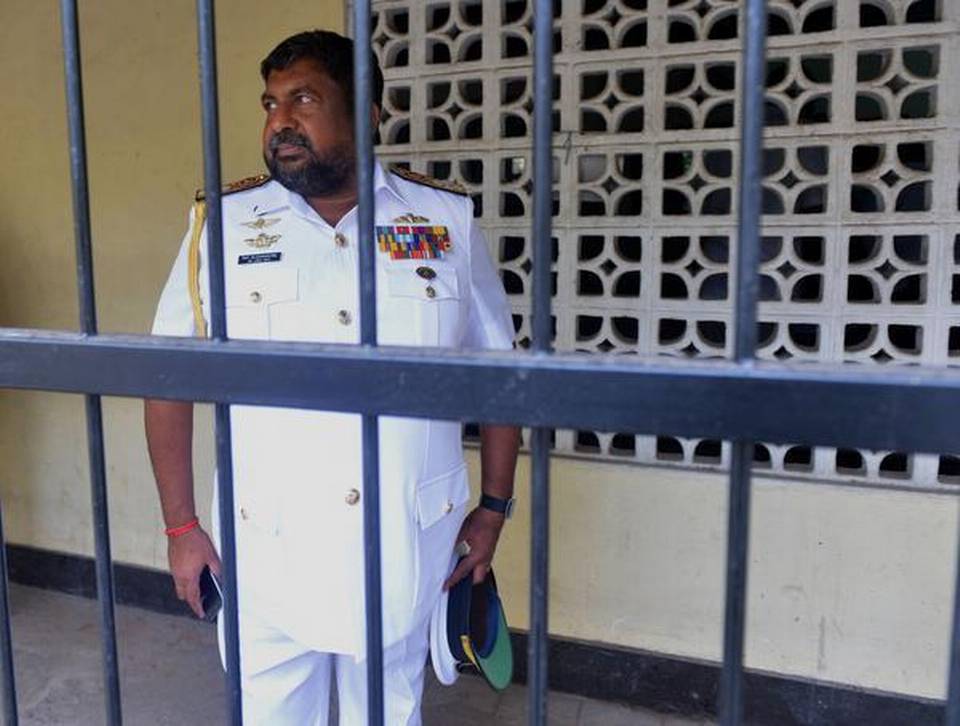 The Fort Magistrate Ranga Dissanayake ordered the detention of Chief of Defence Staff Admiral Ravindra Wijegunaratne until December 5 after he evaded arrest for weeks ignoring warrants.

Given his position of power as the country’s highest-ranking military officer, Admiral Wijegunaratne could influence witnesses or disrupt the ongoing investigation and hence could not be granted bail, the magistrate had noted.

In September, the Admiral had suddenly departed to Mexico following a CID summon, raising serious doubts over his cooperation in the probe.

War-time crimes
While Army intelligence officers have earlier been arrested in connection with war-time crimes, Admiral Wijegunaratne is the senior most official to be interrogated about his alleged role in helping naval intelligence officer Chandana Prasad Hettiarachchi, who is accused of kidnapping 11 young men between 2008 and 2009 for ransom, flee the country.

Presenting himself in court on Wednesday, in full military regalia, Admiral Wijegunaratne denied any wrongdoing.

However, earlier this week, a Lieutenant Commander, who is a key witness in the “Navy abduction racket”, was threatened by six Navy officers, including Admiral Wijegunaratne, the local Daily FT newspaper reported, based on police confirmation.

“I am happy today,” said Jamaldeen Jennifer Weerasinghe, 58, mother of one of the 11 youngsters. “I am hopeful that those who took our children away will be brought to justice,” she told The Hindu, hours after returning from the court proceedings.

“The Admiral is such a senior official. If he is innocent, why did he evade arrest? If he doesn’t have anything to hide, why must he run away from the courts?” she asked.

Son ‘still alive’
For a decade now, she has been looking for her son Dilan. “He was 24 when he was disappeared. Today, my child would be 34,” she said, adding that she believed he was alive “somewhere, somehow”.

“They [Navy officials] worry that if they bring back my son and other children now, they have a lot to explain. So, there is this story that they were murdered,” she said, refusing to accept it.

Ms. Weerasinghe said her allegations against the military were not baseless. “We have great respect and love for the tri-forces. My husband is a retired Army officer who served in the north during the war. We are living off his pension now. We would not just blame someone. But in this case, the Navy must surely know what happened to our children,” Ms. Weerasinghe added.

The polity in southern Sri Lanka and its support base celebrate military personnel as “war heroes”, who ended the three-decade strife by defeating the rebel Tigers in 2009. In the island’s north and east that are home to Tamils, the military invokes fear and haunting memories of the war. An estimated 40,000 civilians, including children, died in its bloody final phase.
– The Hindu.