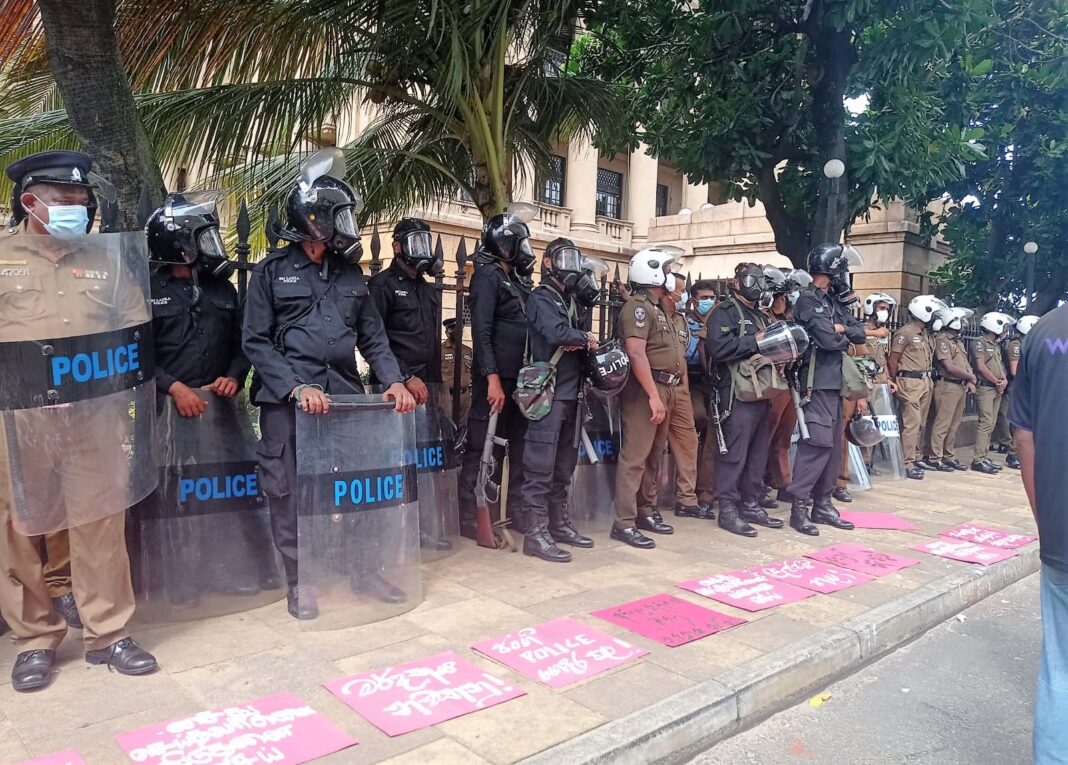 Sri Lanka has been added to a watchlist of countries that have seen a rapid decline in civic freedoms. In recent months – as the country suffers its worst economic crisis in decades – the authorities have responded to anti-government protests with restrictive emergency regulations and the use of excessive and even deadly force against protesters. Journalists have also been targeted, while pro-government mobs have attacked protest sites with impunity.

The new watchlist is released by the CIVICUS Monitor, an online platform that tracks the latest developments to civic freedoms, including freedom of expression, association and peaceful assembly, across 197 countries and territories. Other countries included on the list are Chad, Kazakhstan, Kenya, Mexico and Hungary.

In an effort to quell the protests, state of emergency regulations were issued twice on 1 April and again on 6 May, which allowed authorities to arrest and detain suspects without warrants and restrict fundamental rights such as freedom of expression, assembly and movement. The emergency regulations lacked due process safeguards and gave powers to the President to shut down public processions and restrict access to public spaces. Further, the regulations provided powers to use armed force against anyone who does not comply with orders. The authorities shut down social media services, including Facebook, YouTube, Twitter, Instagram and WhatsApp, for 15 hours on 1 April.

Security forces were also mobilised to crackdown on the protests and used excessive and unprovoked force against protesters outside President Gotabaya Rajapaksa’s private residence on 31 March 2022. Tear gas, water cannon and rubber bullets were deployed, leaving at least 50 people injured. Dozens of protesters were arrested, and some were ill-treated. On 19 April 2022, police opened fire on a large group of protesters in Rambukkana, who had gathered to protest fuel shortages and rising fuel prices. One individual died from gunshot wounds, and 12 others were injured. On 5 May 2022, police fired tear gas on students allegedly attempting to storm parliament arresting 12 individuals.

“The Sri Lankan authorities must refrain from arbitrarily arresting people for simply exercising their rights to freedom of expression and peaceful assembly and ensure that those detained have access to lawyers and are not ill-treated in detention. It must also immediately and impartially investigate all instances of excessive force and extrajudicial killings committed by the security forces, make the findings public and bring the perpetrators to justice,” said Josef Benedict, Asia researcher for CIVICUS

There has also been a lack of accountability for the attack on protesters peacefully demonstrating in front of the Presidential Secretariat on 9 May. The mob also attacked a protest site known as “GotaGoGama”. Television channels live streamed graphic footage of the destruction and the brutal attacks on unarmed people by thugs carrying metal poles, and the destruction of property. The police were largely bystanders doing little to effectively protect the peaceful protesters and their protest site.

Journalists have also felt the brunt of this crackdown. During the protest outside the President’s private residence in March, eight journalists were allegedly assaulted by security forces. Six were accused of violating Section 120 of the Penal Code, which makes it an offence to “excite feelings of disaffection” against the president or government. Thisara Anuruddha Bandara, a youth activist who actively promoted the #GoHomeGota social media campaign to oust the president – used widely during the protest – was picked up at his home on 1 April 2022 in an abduction-style arrest and then charged under Section 120 before being given bail.

“The authorities must investigate the attacks by pro-government supporters against protesters on 9 May, including politicians who may have incited them. Failing to do so will further exacerbate the culture of impunity.  It must also ensure that journalists can to work freely and without fear of retribution for covering the protests and any charges brought against them are dropped,” said Basil Fernando, Director for Policy and Programme, Asian Human Rights Commission.

The violations against protesters are part of a broader trend of attacks on civic space under the Rajapaksa administration that civil society has documented in recent years. There have been systematic attempts by the authorities to prevent or disrupt protests and arrest peaceful protesters, especially in the north and east, against Tamil war victims’ families and civil society organisations.  The notorious Prevention of Terrorism Act (PTA) has been used continuously to enable arbitrary detention, while journalists and critics have also been targeted. The government has also obstructed and even aggressively attacked efforts to hold officials accountable for conflict-era crimes under international law.

Sri Lanka is currently rated ‘obstructed’ by the CIVICUS Monitor. There are a total of 42 countries in the world with this rating (see all). This rating is typically given to countries where civic space is heavily contested by power holders, who impose a combination of legal and practical constraints on the full enjoyment of fundamental rights (see the full description of ratings).

CIVICUS is a global alliance of over 10,000 civil society organisations and activists dedicated to strengthening citizen action and civil society throughout the world.