Sri Lanka: A tight poll – the Big Names may not get 50% plus 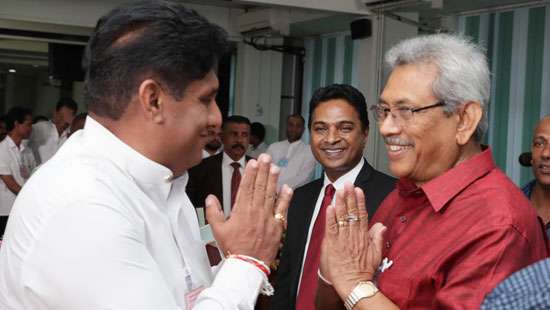 The two major parties, namely the SLPP and the UNF have announced Gotabaya Rajapaksa and Sajith Premadasa respectively as their presidential candidates. The third force JVP has announced Anura Kumara Dissanayake as their candidate. In addition there are several other candidates who either represent various other political parties or come as Independent candidates including Rohan Pallewatta. The former Army Commander General Mahesh Senanayake is coming forward as the nominee of the National People’s Movement & People’s Forum Organization, with the intention of developing and safeguarding the country which is in turmoil. He is backed by the former Auditor General Gamini Wijesinghe together with former Deputy Director of State Intelligence Service Dr. Ajith Colonne, several other retired Army Officers, Lecturers, Scholars and members of Civil Society, all of whom are said to be people of honesty and high integrity.

It is worthwhile to ponder the reason for a group of people, the majority of whom are representing several Social Service Organizations, to think of such an alternative candidate. This is the first time it is happening in an organized manner since Independence, except for a few Individuals who have contested the elections as independents.At the last Presidential Election In 2015 Maithripala Sirisena, Common Candidate  backed by the UNP, TNA, MC, JHU, JVP, Rajitha Senaratne, Arjuna Ranatunga & a number of people representing Civil Society led by the late Ven. Maduluwawe Sobitha Thera, became the 7th President of Sri Lanka surpassing the  war winning President Mahinda Rajapaksa by a narrow margin. The large majority of voters were considered to be from the UNP. There would have been a few voters even from the SLFP supporting the MPs who backed the President. No one ever thought that MR could be ousted as his popularity, especially after winning the war, was high. The new Government which promised a Yahapalanaya & strong action against irregularities & corruption could do only a very little, thereby shattering the hopes of the majority who voted them to power.

Maithripala Sirisena, who came forward as a Common Candidate, ended up being the President of the SLFP with a handful of MPs, giving priority to his party affairs over the important national affairs; against the aspirations of the majority who expected him to be non-partisan. The majority of UPFA voted for MR at the Presidential Election and thereafter at local government elections in 2018, reducing the number of votes to the President a meager 13%.The UNP got embroiled in the infamous Bond Scandal, thereby heavily losing their vote base. The President was at loggerheads with the Prime Minister of the so called Unity Government, thereby slowing down the forward march of the Government which is considered a major failure, especially by the intelligent, educated people who voted them into power.

There were few achievements and more failures. The new administration only succeeded in further strengthening democracy and establishing Independent Commissions. Nothing much has been achieved in abolishing the Executive Presidency, finding a permanent solution to the ethnic problem, strengthening the economy, reducing the cost of living & attending to several other promises made to the masses during the elections. The country was crippled by a string of strikes from time to time thereby jeopardizing the peaceful daily existence of the masses who were subjected to severe hardship & misery. It was evident right throughout that the Government was lacking decisiveness & a sense of urgency in finding solutions. It also could not discipline the nation and its own party, which is considered a major drawback.

The Catholics had to make the supreme sacrifice under this regime, due to the lethargic attitude of the Yahapalana leaders who lacked originality and vision as regards religious extremists, and their planned attacks on three churches and three hotels, killing around 350 people and maiming many others. There were two Commissions on this, and except for taking action against the former IGP and Secretary to the Ministry of Defense for negligence of duty, the people who were directly or indirectly responsible for funding and extending their cooperation are yet to be punished.

It appears that too much of Democracy is bad for countries such as ours. There is no road discipline. It is not the fault of the Police. The Government of the day has to introduce stringent laws to curb road indiscipline. It is not only the motorists who have to be disciplined; even the pedestrians are equally to be blamed. If the politicians can discipline all road users it augurs well for the country, as the children who attend Montessori too will learn the value of discipline from their childhood. Democracy is working beautifully in advanced, disciplined countries where voters are intelligent. They only look at the vision, main policies and manifestos of the political leaders, and their results after the term is over. If they fail to deliver what is promised they are forced to say goodbye to politics. Unfortunately here it is the other way round.

Both major parties share a block vote of over 65%. Hence whether they deliver or not, the Leaders & the parties could remain in politics/power forever. This is due to the foolishness of the voters in a country which has a high literacy rate. Hence politicians are not at the mercy of the voters, but the voters are at the mercy of the politicians. The public sector is inefficient, except for a few institutions, as they are heavily politicized. Both major parties have offered employment opportunities to their supporters without recruiting the most deserving applicants, except for Professionals through a proper recruitment program, resulting in unsuitable persons getting into the public service. It is a known fact that they do not offer their best to the Institutions when the party of their choice is in the opposition. The result is a poor public service except for a few institutions. This is an important area which requires correction by the future administrators of the country.

It is reported that majority of our legislators are not qualified. They need certain basic qualifications and not necessarily a University background. What is needed is an intelligent, honest set of people who truly love the Nation, and the suffering masses that could enhance their knowledge and skills on governance with on the job training and experience. We have had a few Presidents, Prime Ministers & a good number of legislators in the past with average educational backgrounds who were not engaged in financial irregularities. They are still remembered with love and affection for their honesty and service to the Nation. We have a good number of present day politicians who are qualified and wearing western attire with tainted financial records.Hence there is a growing need amongst Sri Lankan voters for a third force. The JVP has not been fortunate enough to play this role effectively for unknown reasons, although they were in politics for a long time.It is thought that Lieutenant General Mahesh Senanayake has come forward at a decisive moment to contest for the Presidency, and he is said to be mobilizing the support of a good number of voters who are disillusioned about the failure of their political leaders/ parties. The political analysts predict a close battle between the two major contenders namely Sajith Premadasa & Gotabaya Rajapaksa. If the JVP & the other Independent Candidates, including Mahesh Senanayake, mobilize a substantial number of votes, it is doubtful whether a winner from the main parties could mobilize over 50% of the total votes.

The President is directly elected for a five year term, through a version of instant-runoff voting in which electors rank up to three candidates, and limited to only two rounds in total. If no candidate wins a majority in the first round of voting, second & third preferences from ballots whose first preference candidate has been eliminated are used to determine the winner.

However, there was never an instance where a run-off count has been needed since the introduction of directly elected President in the 1980s, as a candidate reached 50% in the first count in all elections. It may be the beginning of counting the 2nd/3rd preferences if the results of the 16th November Presidential Election indicate that no one has been able to mobilize over 50% of the total votes polled in the first count.