Sri Lanka: A bombshell in the Northern Province; What next? What after that? 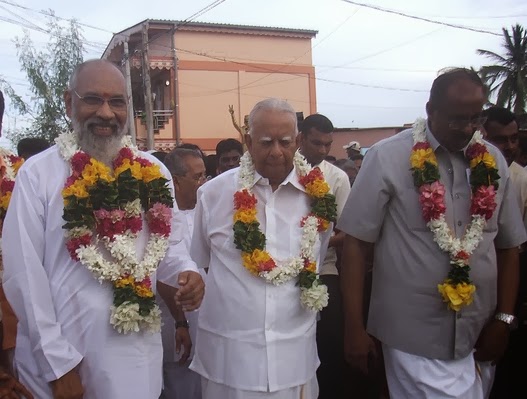 Dr.Kumar David
Provincial Council (PC) elections were held in three provinces in Lanka on 21 September – the Northern (NP), North Western (NWP) and the Central (CP) Provinces went to the polls and as expected the Rajapakse government won fairly handsomely in the Sinhalese majority NWP and the CP securing about 60% of the vote. The bombshell was the NP where the Tamil National Alliance (TNA) was expected to win but the outcome turned out to be a titanic landslide.
The TNA secured about 80% overall in the province and in the culturally and emotionally crucial Jaffna District it took 85%. The TNA (actually the Illangai Thamil Arasu Katchi or ITAK, the largest party in the TNA, is the name under which it contested) secured 30 of the 38 seats in the Northern Provincial Council (NPC) inflicting a stunning defeat on the government. It was thought that because the President’s brother Basil had been spearheading large infrastructure construction projects in the NP, and because the acknowledged base that the government’s point man in the north Douglas Devananda had nursed over the years, Rajapakse’s UPFA would be able to save face. These hopes have been devastated.

The profound political message is this. The Tamils have emotionally reaffirmed the war crimes accusations they have been making against the regime, they have also rejected what they perceive to be an oppressor Sinhala State; there is no other interpretation for this result. President Rajapakse in the meantime held his position in the hearts of the Sinhalese as the NWP and CP results showed. There is now a dangerous bifurcation in the country; a long repressed Tamil voice has found utterance for a message whose intensity is unlikely to diminish at least till there is a change at the Centre. But that is unlikely any time soon. It is in this context that I will make some effort in this essay to think a little bit ahead and speculate on how things may unfold.

The one issue on which Chief Minister designate C.V. Vigneswaran and the new NPC Administration cannot retreat is demilitarisation, in some form and guise; this is non-negotiable for the people and for the TNA unless it wants to lose all credibility. For the President’s other brother and all powerful Defence Secretary (DS) Gotabaya, as well for the army brass, it is a red-line that cannot be crossed. How is President Rajapakse going to make the tactical retreat that he must? What is the inner relationship between President and DS? The siblings are so close that an open rift is hard to believe, and if these gears do crash the regime itself will totter because this axis is the locus of power in Lanka’s authoritarian dispensation.

The blatant involvement of the army in election violence and refusal of the police to intervene indicates that the President has lost control of the DS, or the DS has lost control of the military. To some degree the TNA can thank the army for the landslide; its involvement in pre-election violence and the refusal of the police to intervene galvanised anger. It also focussed the spotlight on either the role or the impotence of the DS.

Hence I believe that the first flashpoint in the new structure will be the question of confining the military to barracks and ending its open involvement in every aspect of civilian life in the north. A meeting, a social gathering, a pamphlet, you name it and it needs permission; and beware someone will be there keeping a watchful eye. This massive election triumph for the TNA must toll the death of this order of things.

The next crucial issue is whether the NPC Administration is allowed to get on with its job – or stated more generally, the relationship between the Centre and the Province. I had been of the view before the elections that since an authoritarian regime cannot tolerate pluralism and sharing of power the regime will bring the NPC Administration to heel or even dissolve it down the line. The tools in the hands of the President are many such as appointing hard-core military types as provincial governors whose powers are great, engineering political rifts as has been done in the Eastern Province, fiscal undermining, and if all else fails, dissolving the Council. However, the enormity of the government’s electoral defeat must have forced a change in these options. There is pressure on the President that he has no choice but to work with the NPC; he has to bend and cooperate.

I am no wide-eyed dreamer, but the Commonwealth Heads Meeting will take place in Colombo in November. It would be suicidal for the regime to get into a confrontation with the NPC before that. It is the chauvinist in the government that are hostile to the new NPC, but has the scale of events cut the ground under them? A friend writing a few days before the elections had this to say:-

“Though chauvinists in the regime use racist slogans on election platforms in the South they have to temporarily tone down their ultra-racism. Gota, Champika and Wimal seem to be going through a crisis.  Liberals and leftist in the government are in a happy mood in this situation, but neither did anything useful during the visit of the General Secretary of HR (UN) or anything constructive regarding the TNA Manifesto.  Vasu’s comments were utterly negative and predicted that the Manifesto would provoke the South. At the same time in a Ravaya interview he attacked Gota and other racists so as a make President Mahinda look like a good guy”.

Champika Ranawaka and Wimal Weerawansa are Cabinet Ministers from allegedly highly racist political parties in the government alliance and Vasudeva Nanayakkara a Cabinet Minister from an allegedly leftist party. Gota is the DS, and Ravaya a radical Sinhala weekly].

It remains to be seen if the regime will put its authoritarianism on the backburner for a while and accept that it has no choice but to change its control-freak style. This is where Delhi and the international community count. The Geneva UNHRC meetings are upon us. A clear and unambiguous declaration and watertight conditions that even the magicians in Colombo cannot wriggle out of are of decisive importance.

Thoughts for the Tamils

TNA leader Sampanthan has proved himself an artful old fox; he is shrewd, intelligent and politically principled. Chief Minister designate Vigneswaran has put his foot and been guilty of a faux pas or two. He is new to politics but needs to learn fast. His reported characterisation of Prabaharan as a hero was totally unnecessary; Tamil youth would have supported the TNA even without opportunist throw away remarks. He took a blind pot-shot at the DMK and ANADMK saying these parties were exploiting the Lanka Tamil issue for their own political gains. Of course it’s true, but why moralise, why rub erstwhile supporters up the wrong way?

What the TNA must not do under any circumstances is capitulate to the pressure of the rump-LTTE Tamil diaspora – TGTL or whatever it calls itself. The TNA must dig in and firmly affirm that it will remain faithful to the Manifesto on which it was elected. This will be trouble enough without taking on board the rantings of LTTE-rump loonies. The TNA has now established beyond doubt that the in-country leadership is at the helm of the Tamil people and it must not allow the tail to wag the dog. The Tamil diaspora has help and can continue to help in the development of the North and the East, it can play a constructive role; that is the relationship that has to be nurtured.

The Tamils should rejoice that their emotions about war crimes has found voice; they had to wait four years for this opportunity, but history, like the mills of god, grinds slowly and unlike the said mills, it does not grind particularly fine. If they are allowed autonomy, in deeds even though not in words, to live freely in their traditional homelands and to prosper, they will have to forget and forgive a lot. That’s the price of reconciliation from the Tamil side. I am reading a lot into possibilities; working together the TNA and Sinhalese democrats can deliver.
Dated 23-Sep-2013
SAA