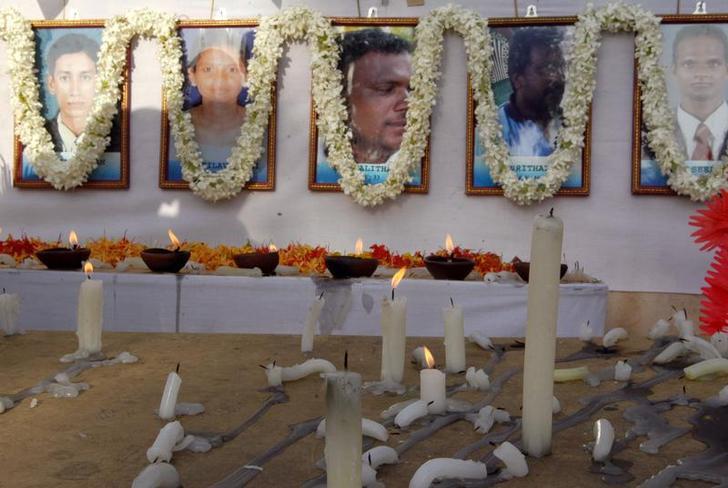 (Candles are burnt in front of the photographs of 17 slain humanitarian workers from the French aid group Action Contre La Faim at their memorial in Batticaloa, Sri Lanka, August 11, 2006. © 2006 Reuters)

(New York/ HRW) – Sri Lankan authorities have not brought to justice those responsible for the execution-style slaying of 17 aid workers a decade ago this week, Human Right Watch said today. On August 4, 2006, gunmen murdered local staff members from the Paris-based Action Contre La Faim (Action Against Hunger, ACF) at their compound in the town of Muttur, in eastern Trincomalee district.

The special court being set up by the government of President Maithripala Sirisena should ensure that the ACF killings and other wartime atrocities are fully and fairly tried with significant foreign involvement, and all those culpable brought to account, regardless of rank or position, Human Rights Watch said.

“The failure to provide justice for the ACF massacre is Exhibit A in the breakdown of accountability for serious crimes during Sri Lanka’s civil war,” said James Ross, legal and policy director at Human Rights Watch. “The mishandling of the ACF case shows why a war crimes court needs international involvement to shield it from political pressures.”

The killings of the ACF workers – 16 ethnic Tamils, including four women, and one Muslim – occurred after several days of fighting between government forces and the separatist Liberation Tigers of Tamil Eelam (LTTE) for control of Muttur. The ACF team had been providing assistance to survivors of the December 2004 Indian Ocean tsunami. The war ended in May 2009, with the LTTE’s defeat.

The nongovernmental University Teachers for Human Rights (Jaffna) published detailed findings on the Muttur killings based on accounts from witnesses and weapons analysis that implicate government security forces present in the area. The group alleges that two police constables and Sri Lankan naval special forces commandos were directly responsible, and that senior police and justice officials were linked to a cover-up.

In July 2007, then-President Mahinda Rajapaksa established the Presidential Commission of Inquiry to investigate 16 major human rights cases, including the ACF case. Families of ACF workers who testified before the commission reported threats by security force personnel. And the commission’s international monitors resigned in protest in 2008, citing grave problems with its investigations. The commission’s full report was not released until September 2015, and while stating it had insufficient evidence to determine the perpetrators of the ACF killings, it effectively exonerated the army and navy in the massacre and indicated that LTTE forces or Muslim militia carried them out.

In July 2013, the Rajapaksa government, facing increasing international pressure, directed state lawyers and investigators to review the case and prepare a comprehensive list of witnesses. Little legal action is known to have taken since then, Human Rights Watch said.

The United Nations high commissioner for human rights, Zeid Ra’ad Al Hussein, in his statement at the Human Rights Council in Geneva on June 29, 2016, said that a way for the government “to quickly build public and international confidence in its determination to pursue accountability, and meet its obligations under international human rights law, would be to achieve successful prosecutions in some of the emblematic human rights cases pending before the courts.” He noted that the ACF case remained in “summary proceedings,” although the Sirisena government had “made renewed efforts to facilitate the appearance of witnesses” – an apparent reference to permitting remote testimony from abroad.

While the Sirisena government has taken important steps to address the serious human rights problems in the country, a number of the commitments made to the Human Rights Council in its October 2015 resolution remain unfulfilled.

Most notably, the government has at times backtracked on its commitment to a judicial mechanism for investigating war crimes and other serious rights abuses by both government forces and the LTTE. The October 2015 resolution specifically calls for the participation of foreign judges, prosecutors, investigators, and defense lawyers, which is crucial to ensure that legal proceedings are protected from local pressures and have the independence that a purely domestic process would lack.

The gap between the government’s formal undertaking to create a tribunal with international involvement and contradictory statements from senior officials has distracted from making real progress on justice issues, Human Rights Watch said. Sirisena has repeatedly said that the justice mechanism will not have foreign judges. However, Foreign Minister Mangala Samaraweera’s statement at the Human Rights Council in June that “our commitment to the Geneva resolution remains unchanged” and other remarks from officials about the need for support from victims’ groups, which back foreign participation, are evidence that the government intends to abide by its pledge.

“The government should honor its international pledge and move forward with a tribunal with foreign judges and other international participation,” Ross said. “The families of the 17 ACF aid workers and other victims need full confidence in the court to bring about genuine justice.”