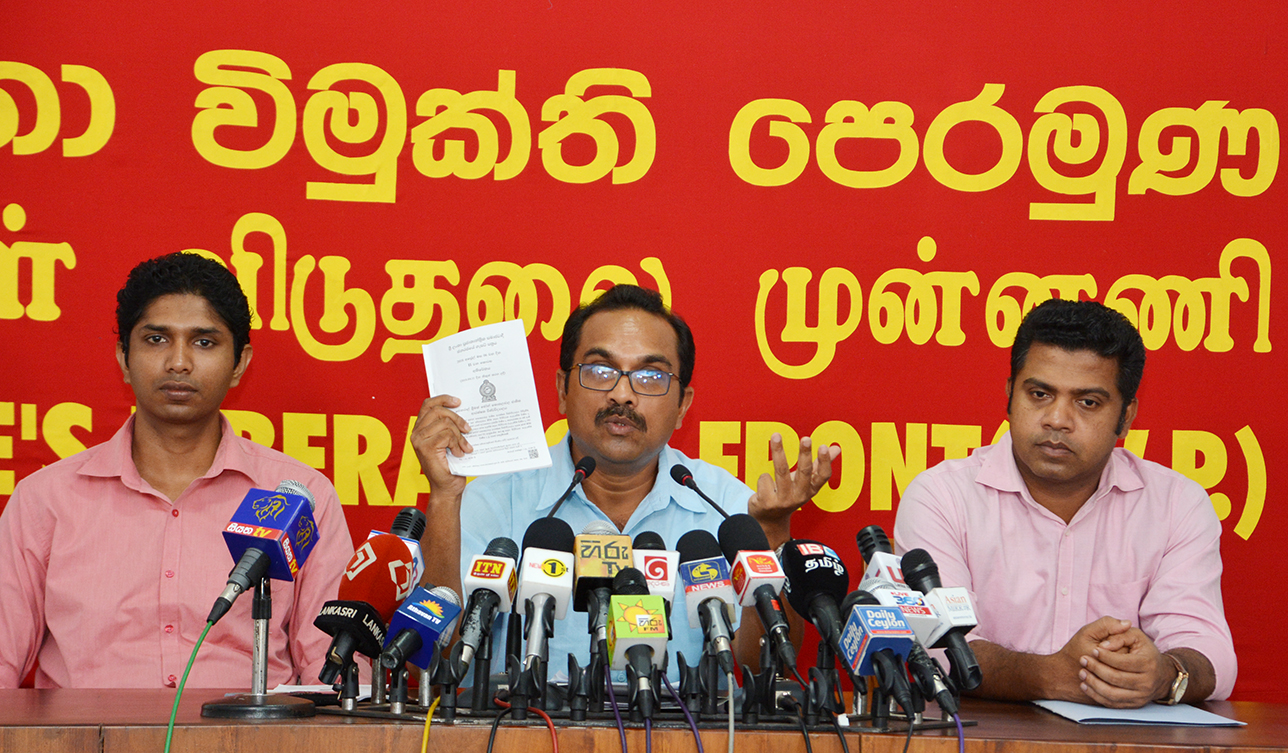 “The John Kotelawala National Defence University Bill to be presented in Parliament is far more dangerous than the White Paper on education that was brought before the country in 1981 to destroy free education. This is the gravest bill presented in the 21st century to privatize education. The bill gives provisions to privatize state universities and to establish private universities spending public money and there has not been given any room for dialogue. Hence we, as the JVP and the Socialist Students’ Union (SSU) emphasize that all organizations that represent free education that includes mass organizations, students’ movement, medical unions, university students’ parents’ associations and the whole Nation should rally to defeat this sinister move,” says the National Organizer of the JVP Parliamentarian Bimal Rathnayaka.

The Member of the Central Committee of the JVP Dr Nalinda Jayatissa and the National Organizer of the Socialist Students’ Union Rangana Devapriya were also present at the press conference held at the head office of the JVP at Pelawatta.

Speaking further Mr Rathnayaka said, “The whole Nation has joined to agitate against SAITM that was maintained to create substandard doctors and in a bid to privatize education in the country. The government, in November last year, promised to abolish SAITM. In such an environment all those who were in the struggle against SAITM accepted on humanitarian grounds that students who were studying in SAITM should not be penalized. Accordingly, it was agreed to get SAITM students who had necessary qualifications stipulated by the Medical Council to study in state universities temporarily. A committee too was appointed for the process. While this committee is carrying on its activities the government has resorted to illicit moves and has brought this bill.

Sir John Kotalawala Defence University was set up under the Sir John Kotelawala Defence University Act No 68 of 1981. according to his last will, Sir John Kotelawala wanted his properties to be used for the benefit of security forces to pursue higher education and training. However, the government is trying to bring in a new bill to intensify privatization of education. The new bill will violate the provisions of the University Act of 1978 so that public funds could be utilized. It will enable foreign and local educational institutes to enter into agreements with the John Kotelawala Defence University and send their students for university education. It will also enable private tuition institutes also to do so. There will be no need for a student to get through the GCE Advanced AL and secure a high Z Score to get a degree from such institutes. Anyone can get a substandard degree from such ‘degree shops’ if they have money. It is a situation that exists in countries such as India and the USA where the degree has no standard.

We saw how the likes of Maithripala Sirisena, Ranil Wickremesinghe and Lakshman Kiriella shed crocodile tears for SAITM students. They said they would not allow any injustice to those students. Now, these rulers are making use of SAITM students to set up private universities in a different model.

For this, the security forces are deployed and an institute that comes under rules and regulations affecting security forces is to be established and the bill gives provision to destroy education in the country in a manner that has never happened in this country before.
To go before the Supreme Court against this bill it has to be presented in Parliament and the Leader of the House should read its preamble. However, last Friday the copies of the bill were kept on MP’s table so that we lose the opportunity to go to Court.
Now, we hear that the government wants to withdraw the bill in the face of protests by Anti-SAITM People’s Wall, students’ movements and other organizations. What this government has done is to violate the last will of Sir John Kotalawala and use it to privatize education. Normally, in a civilized society, the last will of a person is respected and valued. This government is not concerned about such values but has come down to the low level of defrauding a person’s last will.
The university enforced by the bill would be established under the Ministry of Defense. Until now, Kotalawala Faculty was for the higher education affairs of the security forces. However, for the first time in the world children of civilians are to be educated in an institute established under a defence ministry. This is why ‘education shops’ are to be established violating Sir John Kotalawala’s last will. This institute will be under military rule in addition to the rules and regulations that cover civil organizations. The institute will also have the ability to evade University Act 16 of 1978 so that they can have their own way of admission, examinations results and awarding degrees. As such, even those without qualifications could be admitted and anyone can get degrees, postgraduate degrees and diplomas etc.

In our country, there are various institutes established to examine professionalism of doctors, engineers, lawyers etc. A good example is the Sri Lanka Medical Council that decides the standard of doctors and their education in our country. Those who come back with a foreign medical degree, as well as, students who complete the medical degree in this county have to fulfil determinants of the SLMC. However, according to this bill, Kotalawala academy doesn’t come under any such standard as it is given special privileges. However, universities under the UGC would not get such opportunities. If this Bill is implemented people’s money could be used for private enterprises. Also, the bill would be utilized to establish militarized universities. A defense university should present degrees relevant to the defense. However, Kotalawala academy would have a large number of students studying various private courses and a large amount of funds would be used on behalf of them which students in state universities would not get.

On the other hand the government, through this bill, attempt to deploy security forces to privatize education. It is the government that has to directly confront struggles to protect free education and against SAITM. However, if this bill is implemented there is the possibility of directly deploying security forces against such struggles. For, in such instances, students’ opposition would be directly against security forces. What the government knavishly attempts is to deploy security forces for its project of privatization of state universities, the attempt the government has failed so far. Hence, the JVP would rally people’s forces in order to defeat this sinister move of the government. We call upon the masses to rally to defeat the destructive bill. The forces such as university teachers’ organizations, students’ movements, parents associations and all other forces should come together to defeat this draconian bill. We could assure all that the JVP and the Socialist Students’ Union (SSU) would be in the forefront of the struggle.”