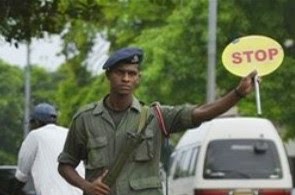 The Army has decided to strengthen security in the Jaffna Peninsula and the Northern Province as part of the
According to Army Media Spokesman, Brigadier Ruwan Wanigasooriya, the Army had taken a decision to once again commence checking all vehicles, vehicle owners and their identity cards that are entering and exiting the North, with effect from Wednesday, 19 March. “Gopi and his colleagues are trying to revive the LTTE, according to information provided by intelligence. The raids will continue until we apprehend the suspect, whom we believe is still staying in the Northern Province,” he added.
“Terrorist Intelligence Division received information that Gopi was hiding in a house belonging to Jeyakumari Balendran at Dharmapuram, Kilinochchi on 13 March. When the TID went there, they fled after firing at the officers. One officer was injured in the incident.We believe that Gopi is hiding somewhere in the North. That is why we have started ‘spot-checking’ after cordoning off the area,” Brigadier Wanigasooriya said.
He also said the search operations will be carried out in a manner that would cause least inconvenience to the public.
He also said the security forces personnel were able to detect a stock of handbills from Palay, Jaffna, which called for the LTTE to regroup, about three weeks ago, along with several suspects. On information provided by them some more handbills, T-56 weapons, RPG and mortar bombs too were taken into custody.
“The handbills call for the revival of the LTTE to form a separate State. It shows that some elements are preparing to revive the LTTE. According to information we have at present, there is evidence that Gopi is the leader of that gang. But, we cannot say exactly. We want to emphasize one thing. We will not allow any terrorists activities to emerge,” Army spokesman stressed.

Manhunt launched to arrest, J.G. Selvanayagam alias Gopi, and his colleagues who according to intelligence reports, is trying to revive the now defunct LTTE.